Sanders supported Minnesota congressman Keith Ellison, whose candidacy was controversial among Jewish groups after his early writings emerged to reveal his skepticism toward Zionism. 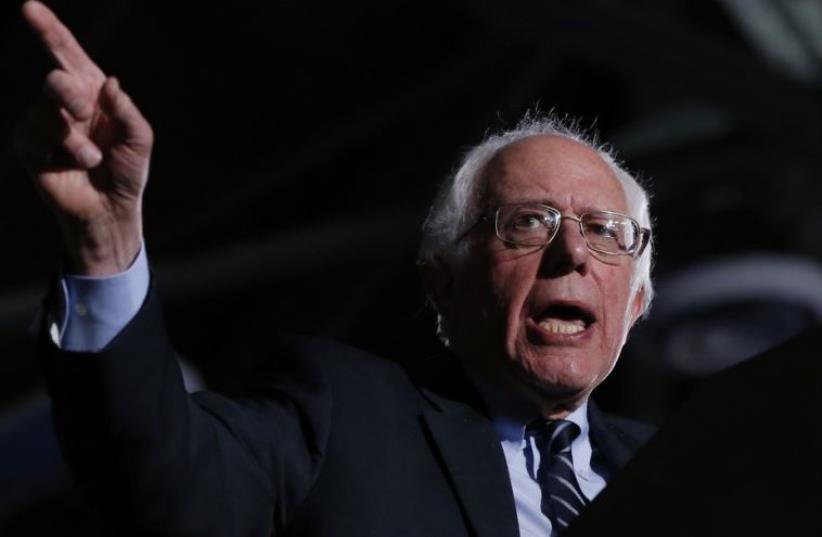 Democratic US presidential candidate Bernie Sanders speaks after winning at his 2016 New Hampshire presidential primary night rally in Concord
(photo credit: REUTERS)
Advertisement
WASHINGTON – Bernie Sanders, an independent senator from Vermont who enjoys widespread support among liberal Democrats, told a gathering on Monday that progressives should embrace both the founding principles of Zionism as well as the inherent justice of the Palestinian cause.Speaking before a conference held by J Street, a liberal Jewish American organization that primarily lobbies for a two-state solution between Israelis and Palestinians, Sanders said that “those of us who support Israel have got to tell the truth about policies that hurt the chances of a peaceful resolution.”“There is no question that we should be and will be Israel’s very strong friend and partner in years to come,” he said. “But we also need to recognize that the Israeli occupation runs contrary to American values and I believe, Israeli values as well.”
Sanders tells heckler "I"m proud to be Jewish" and discusses stance on Israel and Palestinians
“We need to end this 50 year occupation,” he said.But Sanders said it was “particularly important” for progressives in the Democratic Party to acknowledge the moral foundation of the Jewish state of Israel – a state that began as a progressive enterprise, he argued. Such an acknowledgment does not contradict the need for an independent and “dignified” Palestinian state.Sanders campaigned for “balance” on the Israeli-Palestinian conflict in the Democratic Party Platform last year after campaigning with unexpected success against Hillary Clinton for the party’s nomination. He ultimately lost, but secured enough support to earn significant representation on the party’s platform committee.Sanders criticized US President Donald Trump for his failure to endorse Palestinian statehood and to wholeheartedly condemn antisemitism nationwide.The democratic socialist linked a spike in antisemitic incidents with Trump’s political rise, and took note of his hesitance to speak out on the matter for weeks. Trump offered prepared remarks condemning antisemitism as an “evil scourge” last week.