“This conference is the first one in Israel which will talk about the dilemmas facing the military as well as civilian world in regards to medical evacuations.” 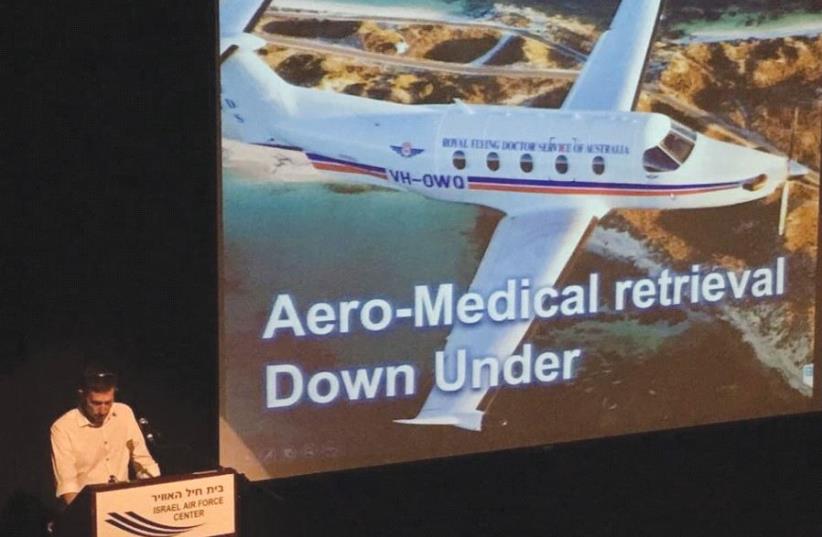 ‘THERE IS NO OTHER country in the world in which all its citizens know that, no matter where they are, there is someone who will bring them home if they need help.’
(photo credit: COURTESY BAR REUVEN/ ISCREAM CONFERENCE)
Advertisement
The first international medical conference to be held in Israel and focus on airborne combat evacuation and treatment took place Monday at Herzilya’s Israel Air Force conference center with dozens of top practitioners and IDF officers in attendance.Organized by the 669 “Cat” alumni association, the conference looked at dilemmas faced by the military and civilian worlds in regards to medical evacuations. It also featured sessions on medical air evacuations in Australia and London, two areas completely different from Israel but facing similar challenges.“This conference is the first one in Israel which will talk about the dilemmas facing the military as well as civilian world in regards to medical evacuations,” Prof. Ari Shamiss, chairman of the scientific committee of the association and CEO of Assuta Medical Centers, told The Jerusalem Post ahead of the conference.The nonprofit alumni association trains Israelis in the proper procedures for medical emergencies and works to motivate meaningful service among Israeli youth and honor the unit’s fallen soldiers. During the conference a dozen of the unit’s “founding fathers” were featured at a ceremony honoring their service.The elite Airborne Combat, Search and Rescue Unit 669 is one of four Special Forces units of the IDF. Only 30 of the 1,200 cadets who tried out for the unit graduated its 18-month course. During that time, soldiers take the commanders course and are trained in combat medicine, parachuting, scuba diving, counter-terrorism, rappelling, rescue under harsh conditions and navigation. Soldiers in Unit 669 sign on for an extra 16 months of service on top of their mandatory 30 months.In the 40 years since it was formed, the unit has rescued more than 10,000 people across Israel and throughout the world, receiving several IDF chief-of-staff commendations for their work.Formed in 1974 following the Yom Kippur War, the unit was initially charged with extracting Israeli pilots who were shot down in enemy territory.It later began undertaking rescue missions of Special Force soldiers as well as injured or stranded Israelis, both at home and abroad, such as during the March 2016 Islamic State terrorist attack in Istanbul that left four dead and 36 wounded.“There is no other country in the world that all of its citizens know, no matter where they are, that there is someone who will bring them home if they need help,” former Unit 669 commander and conference president Brig.-Gen. Efraim Sneh, MD, said.