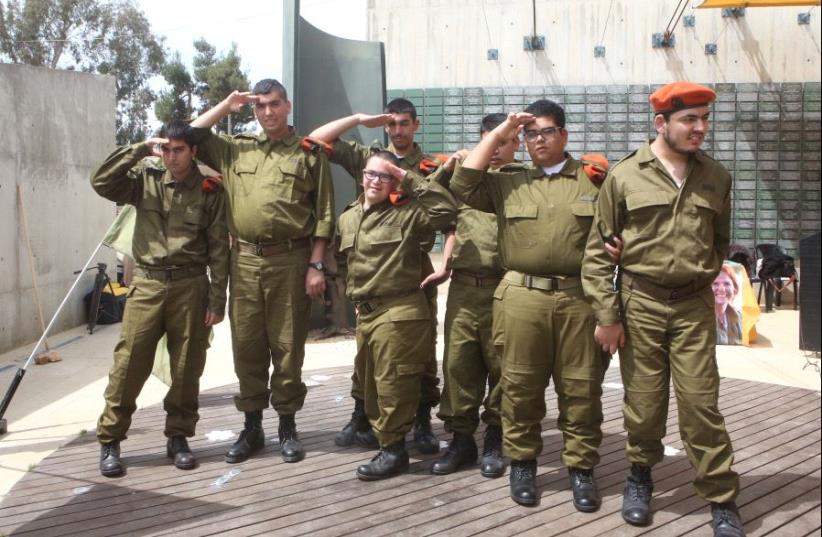 Developmentally disabled soldiers sworn into IDF
(photo credit: MARC ISRAEL SELLEM/THE JERUSALEM POST)
Advertisement
The annual State Comptroller report released on Monday has found that there is an insufficient amount of medical care available for disabled IDF soldiers, a population that with time is getting older and therefore needs more such care.
“This report indicates that a deep crisis has been created in the field of medical services in the rehabilitation department for the disabled, mainly due to the shortage of doctors and due to the burden imposed on those available, to the extent that the level of service provided to disabled veterans is not adequately monitored,” the report read.
The State Comptroller’s Office conducted a review of medical services provided by the Rehabilitation Department of the Defense Ministry between September 2017 and August 2018, examining the shortage of qualified district doctors and its implications.
The audit examined the level of service provided to disabled veterans; the supervision and control of certain aspects of such service that external medical bodies provide to them; and contracts from the Defense Ministry with nursing companies that provide services to disabled veterans.
During the audit in June 2018, the office conducted a telephone survey of 611 IDF disabled veterans, questioning them on the level of service they received. The report noted that the questions related to issues such as waiting times to receive treatment, not to the quality of medical care received.
Established in 1990, the Defense Ministry’s Rehabilitation Department has 21 physicians. Due to a 14% increase in the number of disabled veterans and an increase in the number of services required by an aging population, there are not enough physicians available.
“Over the years, the population of disabled IDF veterans has grown, and this has led to an increase in the scope of medical services required for them,” the report said.
The findings of the survey indicated dissatisfaction among disabled veterans, specifically with the low availability of specialized physicians and the long waiting periods.
According to the report, the shortage of doctors began in 2014 and has only become worse over the years. The lack of doctors has led to an increased burden on those providing care and has had a negative effect on the service provided, which the report said may also impair their chances of rehabilitation.
The report found that due to the shortage of medical providers, doctors are mainly involved in issuing prescriptions and referrals, and have very little time to deal with other important areas such as initiating meetings with disabled veterans or visiting them at home. Doctors are also often forced to issue prescription drugs to veterans whom they do not know, the report said.
According to data from the Rehabilitation Department, medical services were provided to an estimated 57,000 disabled veterans in 2017, at a cost of NIS 850 million.
The State Comptroller’s report recommended that, “in view of the significant deficiencies that arise from the findings of this report, the Defense Ministry must examine the medical services provided to IDF disabled persons as a whole and find a comprehensive solution to the deep and ongoing crisis in the area of regional physicians.”
The report also recommended that the Rehabilitation Department should systematically supervise and monitor aspects relating to the level of service provided by external bodies to disabled veterans, such as the availability of specialist physicians in independent clinics and waiting times for tests in hospitals, as well as waiting times and treatment in the clinics and hospitals themselves.
In response to the report, the Defense Ministry stated that it provides 57,000 disabled IDF veterans with the “highest quality and most comprehensive rehabilitation facilities in Israel,” despite the difficulties they face.
The ministry admitted that it has been “struggling for several years” to recruit first-rate doctors, since the wages approved by the Finance Ministry “offer these doctors significantly lower salaries” than what are offered by the National Insurance Institute and the health funds.
“The Defense Ministry is holding intensive discussions with the Finance Ministry, the Civil Service Commission, the Health Ministry and the Israel Medical Association in an attempt to resolve this important issue as soon as possible,” read a statement, adding that at the same time, the ministry is trying to remedy the lack of doctors in other ways, including expanding the circle of external suppliers and service providers.