Why are there so many construction site accidents in Israel?

In 2018, Israel ranked third among OECD countries in the number of construction sites fatalities, after only Cyprus and Portugal, with more than double the average. 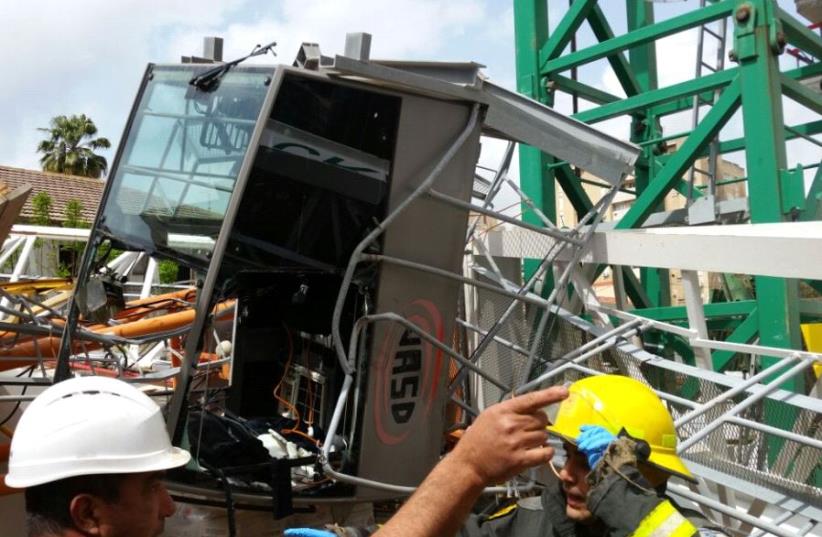 Crane collapses in Ramat Gan
(photo credit: MDA)
Advertisement
Sunday’s collapse of a crane at a construction site in Yavne was not an isolated incident. Rather, the accident was one in a series of such mishaps that have led to the deaths of nearly two dozen people.
So far in 2019 alone, 19 people have died on construction sites across Israel. The causes of their deaths range from falling from heights or electrocution by cables lying around unprotected, to being hit by falling objects or loose construction materials or debris, according to the Tel Aviv-based NGO Kav LaOved (Worker’s Hotline).
The organization addresses construction site challenges and assists employees affected by workplace violations, advocating on their behalf and more.
According to a report published by the Labor Ministry, the first half of 2018 saw the number of fatal work accidents in all building sectors increase by 26% compared to 2017, with 17 deaths on construction sites, accounting for over half of total fatalities. In 2018, Israel ranked third among OECD countries in the number of construction sites fatalities, after only Cyprus and Portugal, with more than double the average.
The Safety Administration, a body within the ministry that is responsible for ensuring workers’ safety, reported that in the first half of 2018 it carried out intensive enforcement activities, with over 900 inspection visits. It imposed 567 safety orders and more than 1,000 targeted sanctions.
Safety orders and sanctions have been reported to be ineffective, however, with an insignificant number of contractors having their licenses confiscated by the Contractor’s Registrar.
“After accidents, the companies go back to work within a few days,” said Dr. Hadas Tagari, head of the Struggle Against Construction and Industry Accidents. “The investigations usually don’t lead anywhere.”
Fatal accidents are only a portion of those that plague the sector. The number of injuries in the sector alone has already reached 68 in 2019, 11 of victims suffering severe injuries.
“There are many actors involved in this story, and many reasons the situation is as it is,” Tagari noted. “There have been frequent changes to the system, but the job hasn’t been done and the management is really bad.”
Local authorities are some of the bodies responsible for implementing measures to protect workers on construction sites. The Contractor’s Registrar and Safety Administration cannot deal with the large amount of construction sites across the country, Tagari claimed. She said that the gap must be closed by local authorities.
“They [local authorities] are the ones who issue building permits that contractors start operating with,” she explained. “It’s their job as well to ensure that the building site is fit to ensure workers’ safety during operations.”
There are other issues that explain why these incidents persist as well, she said. There aren’t enough personnel and advisors in the governmental bodies to conduct efficient inspections, report on safety problems, issue safety orders, bring companies to hearings and apply punitive actions. And those who are on the field are not effective enough and lack the authority to implement the decisions.
“Our goal, ultimately, is to prevent accidents,” she continued. “We don’t want to wait for another person to be killed in order for measures to be taken.”