Women - The Mossad wants you! 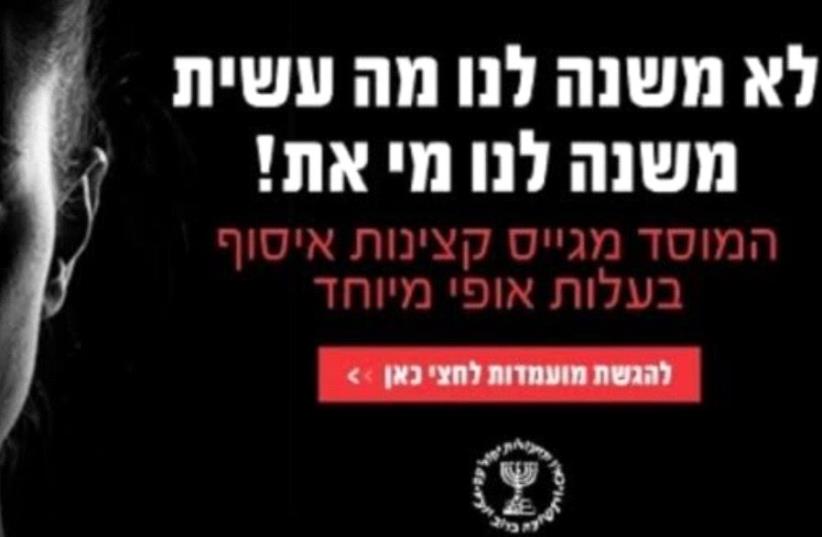 Mossad recruitment ad for female case officers
(photo credit: screenshot)
Advertisement
Israel’s Mossad intelligence agency launched it’s first female-targeted recruitment campaign for the first time since it was established in 1949.In ads published in Israeli newspapers and on the agency’s website the Mossad said it was recruiting “case officers with special character traits,” and those interested are invited to apply for positions in the agency’s intelligence, staff, and technology departments. “Wanted: Powerful women needed,” announced the ad alongside a woman’s face, whose features are half-obscured in the dark.“We don’t care what you’ve done, we care about who you are!”In one of the Mossad’s most notable operations, a woman played a central role in the success of the mission.In 1986, a female agent in London known as “Cindy” seduced Mordechai Vanunu-a nuclear technician at the Dimona nuclear plants who sold Israel’s nuclear secrets- lured him to Rome into the hands of the Mossad, who drugged him and smuggled him back to Israel in a ship to face trial.Since then, women have continued to play a significant role in the agency.The Mossad is comprised of about 40% women, with 24% in key top-level positions. And while women rarely fill prominent positions in Israel’s intelligence and security organizations, the Mossad has had three women who headed divisions, including Aliza Magen, who served as the Mossad’s deputy director.Last week, Prime Minister Benjamin Netanyahu, President Reuven Rivlin, and Mossad chief Yossi Cohen awarded certificates of excellence to 12 Mossad employees, half of whom were women.In 2012, former Mossad chief Tamir Pardo praised female Mossad agents in rare-on-the-record comments, stating that women “have a distinct advantage in secret warfare because of their ability to multitask,” and that they “suppress their ego in order to attain goals.”“Contrary to stereotypes, you see that women’s abilities are superior to men in terms of understanding the territory, reading situations, spatial awareness. When they’re good, they’re very good.”