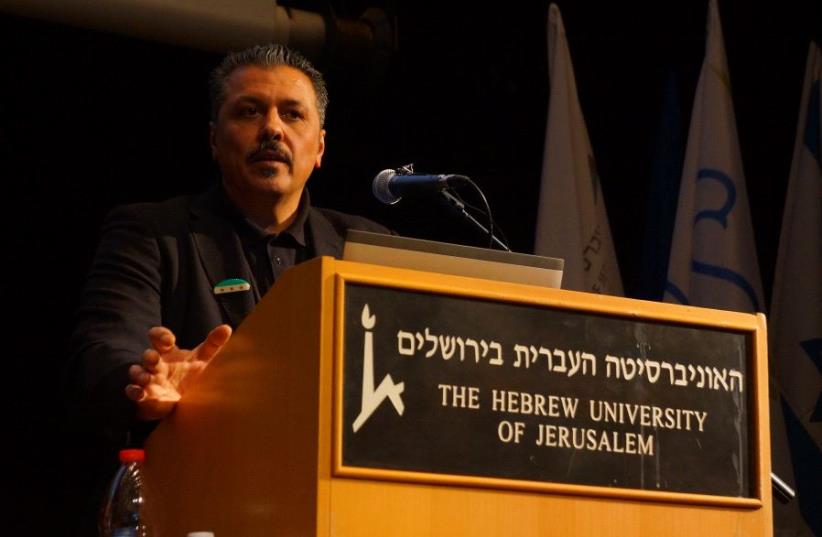 Issam Zeitoun, Syrian opposition figure
(photo credit: REUVEN REMEZ TRUMAN INSTITUTE)
Two Syrian opposition figures making a rare public appearance in Israel called Tuesday for stepped up Israeli assistance to the Syrian opposition, including help in establishing a safe zone for rebel elements in southern Syria along the Golan Heights.Speaking to a packed auditorium at an event sponsored by the Hebrew University’s Truman Institute, Germany-based opposition activist Issam Zeitoun made a blunt appeal for help. “All Syrians have suffered under this regime. Something must be done. The Syrian people are too weak. We need the help of the international community.”Sirwan Kajjo, a Syrian- Kurdish journalist who is wanted by the Assad regime, sought to give the audience a sense of the devastation in Syria. He said that in Iraqi Kurdistan he had met a woman who fled Damascus who had sons drafted into mandatory military service fighting for the regime and a son fighting for the rebels.Another son had been killed and her two daughters had been forced to flee with her.“Half a million people, mostly civilians have lost their lives,” Kajjo said. “People now say, ‘just fifty people died today.’ But one is too many. Assad has turned the deaths into numbers. I have a nephew who died fighting ISIS and a relative arrested in Damascus.”Kajjo and Zeitoun’s remarks were repeatedly interrupted by Arab students angry that they were breaking a taboo and according a kind of recognition to Israel. “You are a disgrace to Syria” one student shouted at Zeitoun.After a tense few moments, she and another student left the hall, and she said outside.“They shouldn’t ask for this help from Israel. Our people are dying here, we are Arab.”MK Ksenia Svetlova (Zionist Union), who moderated the event, sought to quiet down the shouts. “Hospitality is important to all our cultures.People have come here to listen to them,” she said.But the shouting continued: “You should be giving voices to the voiceless, not pandering to the occupation,” a woman shouted.Zeitoun defended the appearance. “We should be everywhere including Israel to explain the Syrian problem to the world, to convey their voices,” he said.Anwer Naso, a Kurdish political activist in northeast Syria, addressed the gathering via Skype with an update on how the cease-fire agreement recently brokered by Russia and Turkey is faring.“There are many violations in Idlib and other areas, but compared to the prior situation, things have improved in many parts of Syria.”But he said daily life was still grim. “For six years the regime has destroyed the economic infrastructure so even when the war stops it is hard to survive economically. Food prices have skyrocketed and it is hard to meet basic needs for the family. Many children have not been to school in years which hurts the next generation and prospects of rebuilding.”In terms of what should be done, Zeitoun said: “We suggest a safe zone along the border with Israel.” he told the audience.Asked after the event to elaborate, Zeitoun said he wanted Israel’s help in establishment of “a small state” in southern Syria that would be able to develop infrastructure free of attack by the Assad regime. “A small state could be expanded with time. You can’t now collapse the Assad regime and replace it. We’re not ready so it’s good to start from this safe zone and expand it.“The role of Israel in the Middle East is to get us the political cover to let this project be, to convince Mr.Trump to take [on] this project,” he said. To enable the mini-state, Israel “should establish a no-fly zone near the Golan or convince the Americans to create it,” he said.Kajjo also called for establishment of a safe zone along the Golan in remarks to The Jerusalem Post after the event. “Israel should get more involved in the humanitarian effort,” he said. “What is happening in southern Syria in terms of helping the wounded and providing for basic needs in the border area is great and people are grateful. But I’m more concerned with political support. There are many groups in the opposition open to developing a degree of relations with Israel. Israel needs to capitalize on that.Rebels have stated many times that if you give us an opportunity to create a safe zone we can show the world, yes, this can be implemented in other parts of Syria.”Kajjo said that establishing a no-fly zone to enable the border safe zone “could not only help Syria opposition groups but also serve Israel’s security [interests] to keep Hezbollah and other terrorist groups away from the border because Assad is expanding and sending these groups so it is important for Israel to at least have a safe zone.”Fahd al-Masri, identified as the chairman of the National Salvation Front in Syria, addressed the gathering from Paris in a pre-recorded message, saying “our goal is for the new Syria to be outside of conflict and to focus on building a culture of peace. The new Syria won’t be hostile in any way to Israel or any state in the region.”