The Weekly Schmooze: Teach Wolf Blitzer how to Dougie

By LAHAV HARKOV
DECEMBER 2, 2010 13:46
weekly schmooze 311
(photo credit: Courtesy)
Advertisement
Sometimes a little feminism goes a long way, as New York lawyer Bennett Epstein learned recently. Epstein wrote a letter to Kimba Wood, the judge presiding over a case he was working on, explaining that his daughter is due to give birth on December 3. Epstein explained that he "secretly hopes" that his daughter will not have a girl, but he will try to mask his disappointment by saying he's glad "it's a healthy baby." However, if Epstein's daughter has a girl, he will need a day off for the bris. The judge responded by requiring Epstein to have a simchat bat of sorts. "Mr. Epstein will be permitted to attend the bris, in the joyous event that a son is born," Wood wrote. "But the court would like to balance the scales. If a daughter is born, there will be a public celebration in court, with readings from poetry celebrating girls and women." 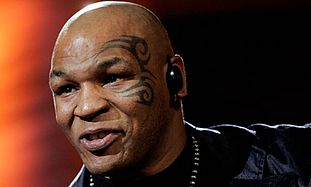 In other surprising news, boxer Mike Tyson has decided to quit his diet of biting off bits of other people's ears and become a vegan. Why is this news schmooze-worthy? Well, Tyson is reportedly planning to open a chain of kosher vegan restaurants. He was recently spotted discussing the new business venture with Moshe Malamud, Executive Chairman of the Franklin Mint, at Solo, a high-end kosher restaurant in New York.Earlier this week, the Soul Train Awards were broadcast on American music channel BET, with a surprise visit from CNN host Wolf Blitzer. What was Blitzer doing at an awards show honoring the best in Black music and entertainment? Why, he was doing the Dougie, of course. The Dougie is a dance that inspired the popular hip-hop song "Teach Me How To Dougie," which was released in early 2010. Watch rapper Doug E. Fresh, the dance's namesake, teach Blitzer how to Dougie, about 35 seconds into this video:
BET Videos

On the other end of the pond, aspiring singer Katie Waissel, 24, has been making her way through the ranks of UK television talent contest "X Factor" – but barely. Waissel, who is Jewish and born with the last name Vogel, has been ranked in the bottom two in every episode but the last, despite being lavished with praise by the show's judges week after week. Check out a recent performance:Katie is very unpopular with X-Factor fans, and has been "saved" by the judges almost every week. There's even a Facebook group called "It's easier to get rid of chlamydia than it is Katie Waissel." One British tabloid has posited that Katie hasn't been getting votes due to "a vicious hate campaign because she is Jewish.  "Notorious Muslim fanatic Abu Yahya" told the Daily Star that "people have hatred for [Katie] because of the conflict in Palestine." 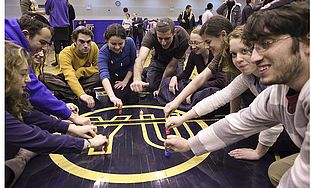 In honor of the Hanukka, Yeshiva University has come up with a creative fundraiser for student scholarships: Dreidelpalooza! The event brought YU students, alumni and others together, in an attempt to break the Guinness World Record by having over 541 dreidels spinning at once. The participants in Dreidelpalooza set a new record, with 618 dreidels, and raised hundreds of dollars for undergraduate scholarships. Last but not least, the Schmooze would like to wish you a happy holiday, in the form of a new Hanukka song by Matisyahu, appropriately named "Miracle." Check out the hilarious music video, which features an ice-skating black Maccabee:The Weekly Schmooze collects the hottest Jewish culture news from around the world. Ranging from celebrities to philanthropy to quirky communities, we're here to schmooze about Jews.If you have any news to share with The Weekly Schmooze, write to: weeklyschoomze@gmail.com