By YONI COHEN
JUNE 9, 2013 13:35
Bar Refaeli posing in front of urinal 370
(photo credit: Instagram)
Advertisement
Bar Refaeli created yet another storm on social media this weekend when she posted a picture of herself standing over a urinal in an apparent bid to show her support for transgender equality.The Israeli supermodel posted the picture on Twitter, with the caption saying "Gay, lesbians, bisexual, transgender ALL EQUAL TLV #gayweek." She later removed the picture which showed her standing at the urinal with her legs slightly parted, her hair tied back and facing away from the camera. She also posted the picture to her official Facebook page.

The picture, the posting of which coincided with the Tel Aviv Gay Pride Parade on Friday, received both positive and negative feedback from her social media followers. 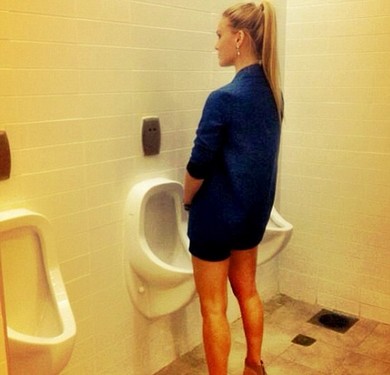 After making a brief appearance on stage at the main pride event, the model also posted a picture on Instagram of the crowd with the caption "Tel Aviv #gayweek INSANE!!"

Refaeli is no stranger to social media controversies. She came under fire in December of last year for posting a photo of herself dressed in a Santa suit on Instagram with the caption “Good Morning Santa.” Twitter followers berated Refaeli for wearing a Santa suit, since she is Jewish, even telling her that she is “betraying Israel.”While the model received a number of harshly-worded messages condemning the picture, many of her Instagram followers came to her defense. “Part of her fans are Christians. You can’t judge a person cause of his religion,” one follower wrote.
Advertisement
Subscribe for our daily newsletter