Kurdish women take up arms alongside men to defend their people

The presence of women fighting ISIS became an exotic and sensational topic in 2014 and 2015, but the reality of life for many women is more complex. 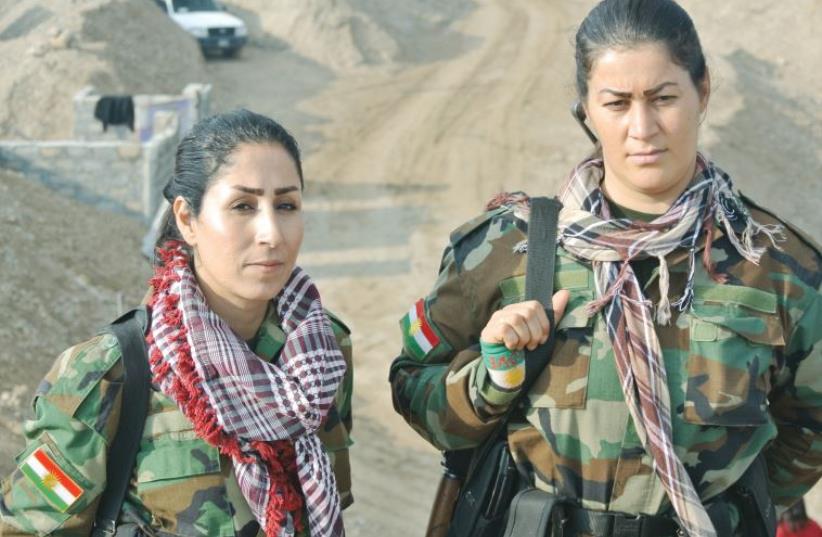 Kurdistan freedom Party (PAK) soldiers in December 2015 at the front line near Kirkuk, Iraq
(photo credit: SETH J. FRANTZMAN)
Advertisement
Last December on “Kurdish Flag Day,” young Kurdish women turned out in Dohuk in the northern region of Iraqi Kurdistan to celebrate their nation’s desire for independence. Typically, Kurdish women would wear traditional clothes on this day: a brightly colored dress and sash around the waist with a see-through shawl sometimes draped on the shoulders. But last year many women turned out in green forest- camo uniforms. It wasn’t only in Dohuk; as I drove across Kurdistan that day, teenage girls in small towns were dressing up as fighters for Peshmerga, the national defense forces of Kurdistan.It is part of a quiet revolution of Kurdish women taking place in all parts of Kurdistan from Rojava in Syria, to Rojhilat in Iran, Bakur in Turkey and Bashur (Iraqi Kurdistan). Kurds say that women have played a key part in their national struggle for rights and independence for generations, but the first female Peshmerga units were founded in the mid-1990s. This history was brought home to us as we sat in a caravan near Mosul Dam, less than a dozen kilometers from the front line with ISIS, a room full of Kurdish women from Syria. Trained by the Zerevani Peshmerga in northern Iraq, they are part of a unit of Rojava Peshmerga that includes men and women from Syria who fled Bashar Assad’s regime.

“Having women serve changes the image of women in society. We prove to everyone that women can run a house and run a country. In the past, Kurdish women also joined and took part in revolutionary movements,” says Capt. Gulestan Yusuf Ahmed, who commands the unit of women manning a checkpoint near the strategic dam. “We can run a household and a country.”This is a tough life here. In this scorched countryside the women live in caravans, and other than their AK-47s, they seem to have limited equipment. There are more than 100 women in this unit, says the captain, part of a larger force of around 3,000 men and women who guard checkpoints between the Mosul Dam, Rabiah and Snune. Most of the women are in their early 20s and unmarried. 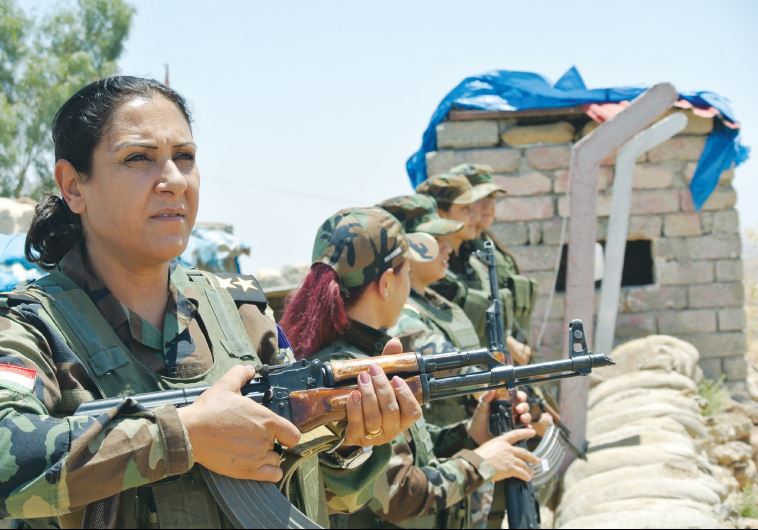 “We left our land and want to return to the land. In the fight, we don’t have less of a role than men; actually we have a bigger role, because we are dealing with taking care of our families and also fighting,” says the captain. Because of political differences with the PYD, the Kurdish political party that runs eastern Syria, the women say they cannot return as a unit to fight ISIS.The prominence of women fighters among Kurds first gained attention in Syria among the left-leaning People’s Protection Units (YPG) and its offshoot, the Women’s Protection Units (YPJ). This all-female force grew to more than 7,000 fighters in 2014 and women were thought to make up 35% of those fighting ISIS in Syria according to reports. These groups borrowed their concepts from the Kurdistan Workers’ Party, a third of whose fighters were women in the 1990s when they were struggling against Turkey. Among these left-leaning groups, the incorporation of women was seen as an ideological and revolutionary process as well as a military decision to use them as guerrilla fighters in Turkey. The same was true for Yazidi women recruited to the Ezidxan Women’s Units, which is allied to the PKK in Sinjar and fought ISIS in 2014.In the media, the presence of women fighting ISIS became an exotic and sensational topic in 2014 and 2015. They were called “Amazons” in one article. But the reality of life for many women is more complex. In the PKK, as an ABC report noted, they do not get married, as “any sort of romantic affair is strictly forbidden.” 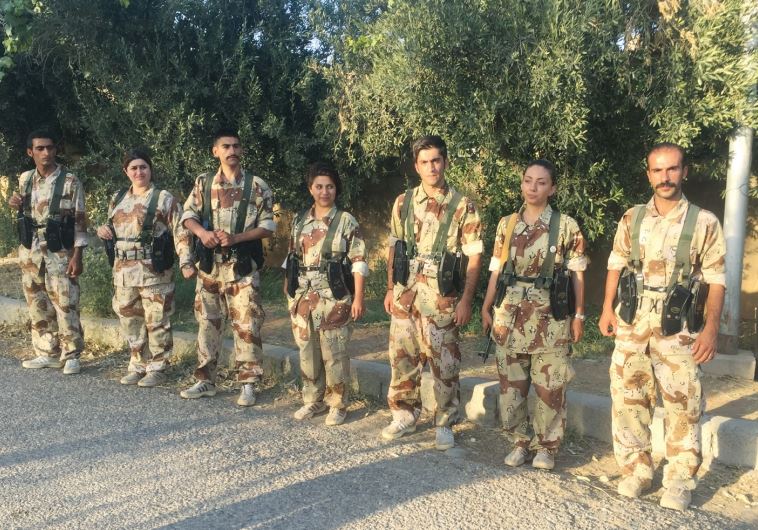 In interviews with Kurdish women who joined the Peshmerga, the Democratic Party of Iranian Kurdistan (PDKI) or the Kurdistan Freedom Party (PAK), they expressed differing motivations. Hatred of ISIS and desire to defend Kurdish land is a major factor.“There are no words that can describe [the evils] of ISIS; they are against humanity. They are inhuman, they attacked our land, they took women and children and they harmed all ethnic groups,” says a member of the Rojava Peshmerga.Young Kurdish women from Iran who fled the Islamic Republic to the Kurdistan Regional Government in northern Iraq have joined the PDKI and intend to go back to Iran to fight the regime. Saher, 20, came because “the regime is torturing women and Kurds and I think it’s important to participate.” She admits that as a woman it is more difficult than for men, but she says the fight for women’s rights in Iran is part of the overall battle for Kurdish rights. Women in Iran are forced to cover their hair; here in northern Iraq these young women wear their hair however they want and train with AK-47s.“We wanted to struggle for our nation,” says Delaram, 22, who has been away from Iran for only a month. “I decided before to come but then I found an opportunity to enter PDKI here. It’s not difficult to come, but I am worried for my family. We just want the world to support us.”Among the PAK, women have been serving west of Kirkuk and on the front line at Bashiqa in one of the most exposed positions to ISIS, only 17 kilometers from Mosul. Although they know how to use their AKs, most of them do guard duty or stay closer to a base camp behind the front line. Interviewing them in a bunker, safe from ISIS mortars, the women said the internal situation in Iran is very bad. 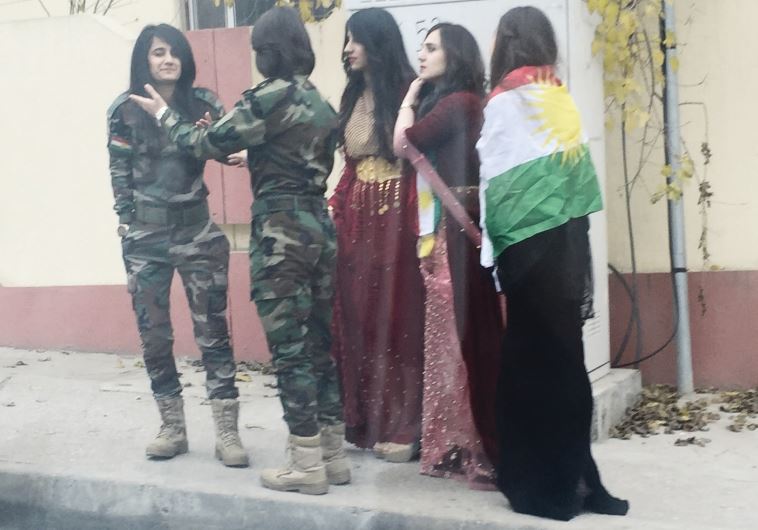 “Kurdistan should be independent and united. We came to support the Peshmerga and kill enemies. We want one Kurdistan,” says their commanding officer, who is a man. They say if they go back to Iran they will be killed by the regime.More Kurdish women from the Kurdistan Regional Government, which has tended to be more conservative than its neighboring Kurdish areas, are joining fighting units as well. Some of those are being trained by the international coalition fighting ISIS through the Kurdistan Training Coordination Center. At the Bnaslawa base outside Erbil, in dreadful heat topping 43º, 35 women are doing an eight-week training course.“It’s great to see women fighters; their hearts are just like the hearts of men. They’ve been up in the mountains and that means as much for them and they take on the security of their country,” said a spokesman for the training. Women aged 17 to 77 have asked to be trained to fight. One 45- year old lost her husband and two sons to ISIS murderers.That’s what hangs in the background here. Many of these women have members of their family they describe as martyrs, who died at the hands of Saddam Hussein or other regimes. Now they, too, want to pick up the rifle. But this revolution has a long way to go. In meetings there was a tendency when men were present for them to engage in a bit of “mansplaining” for the women to explain their motivations for them.Judging by the women who now regard a uniform as something that is as normal to wear as a dress for national holidays, the role of women in this war is unique, especially when compared to neighboring non-Kurdish areas where theocratic-based parties dominate in Turkey, Iran and increasingly among the Shi’a in Iraq.Their status in the culture is diametrically opposed to that of their counterparts under their main enemy, ISIS, whose abuse of women is unparalleled.