'The Duke of Nablus': The journey of one of the wealthiest Palestinians

Munib al-Masri, 82, is the wealthiest Palestinian in the West Bank and Gaza Strip. 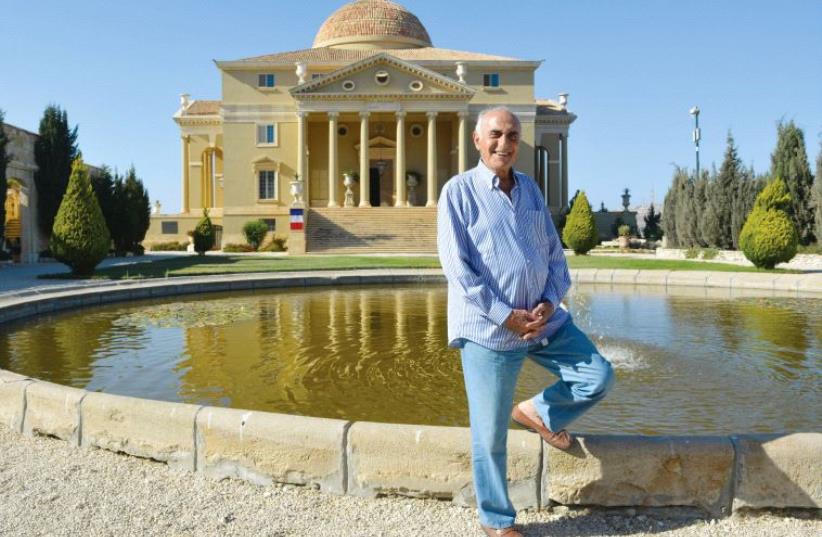 Al-Masri and his mansion in Nablus
(photo credit: UDI SHAHAM)
Advertisement
In the middle of the busy streets of Nablus, we hail a cab. “Where do you need to go?” asks the driver. “To Mr. Munib al-Masri’s home,” we reply. The driver pauses and then asks us to call Masri for directions and we comply.“Hi, where is your home located?” the driver asks Masri. 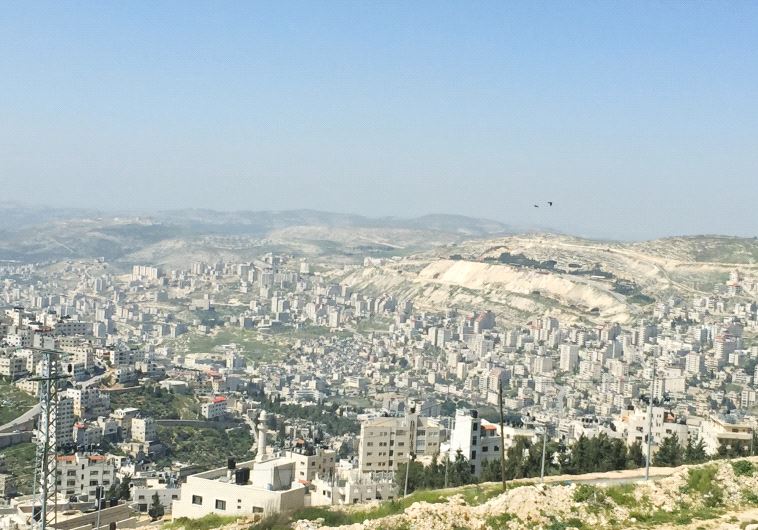 A view of the city of Nablus (photo credit: SETH J. FRANTZMAN)
Beginning of his political and professional pathBack in the Middle East, Masri employed his geolocation knowledge and started mapping the West Bank and Jordan, looking for water and oil. In 1956, he established his own holding group, which specialized in a variety of trades, including exploring for natural resources. He traveled throughout the Middle East for his work. He first met with Fatah co-founder Yasser Arafat in 1963 during a business trip to Algeria. There, Masri and Arafat established a strong bond, which would last until Arafat’s death. While Masri quickly established himself as a major businessman in the Middle East, shifting his focus to water exploration in Jordan, the Gulf States and other parts of the Middle East, he also grew closer to Arafat and stayed involved in politics. His first major role in government came in 1970 when King Hussein of Jordan appointed him minister of public works as part of an agreement with Arafat. The agreement followed the Black September events when the Hashemite family crushed an armed uprising of the PLO in Jordan, ultimately expelling it and its members to Lebanon.AS A minister in the Jordanian government, Masri worked 17 hours a day, focusing on his governing responsibilities. Yet, he still made time to meet with Arafat and PLO chairman Ahmad Shukeiri to discuss ways to advance the Palestinian cause. At that time, Masri wanted to develop a new strategy to bring international support to the Palestinian cause. He envisioned the establishment of a lobby in Washington akin to that of AIPAC, and was a founder of AMEPRI, a group of professors who would lobby for the Palestinians. However, differences between some of the scholars, including Edward Said and Hisham Sharabi, over how to advocate for the Palestinian cause, ultimately led to the group’s collapse, crumbling a few years after it was founded.“I always wondered what made the Zionist movement so successful. I wanted to create something similar to AIPAC and bring balance to the discussion regarding Palestine in Washington, but disagreements among our scholars hindered the program.”Peace processThe first intifada in December 1987 attracted international attention to the Israeli-Palestinian conflict and to the future of the region. Although the Israeli government considered the PLO a terrorist organization at the time, senior officials in Israel started establishing connections with Palestinian leaders, seeking a way to lower the flames of the popular uprising. When then-defense minister Yitzhak Rabin wanted to reach out to the Palestinian leadership, he called Masri. Rabin and Masri discussed a number of issues at length in addition to the possible meeting of Rabin and Arafat. “I told him, even if you would bring the prophets Abraham, Moses, Jesus and Muhammad we would not achieve peace between Israelis and Palestinians. I said you have to work with Arafat because he is the only person who can achieve it,” Masri recalls telling Rabin. “Then Rabin told me that he wanted me to be the Palestinian president. I laughed and asked ‘who am I to do that? And who are you to decide?’ Years later, when we signed the Oslo Accords, he came up to me and whispered in my ear, ‘Please don't tell me I told you so.’ We then laughed together.”SOME GROUPS among Palestinians and Israelis perceive the Oslo Accords as controversial. While right-wing Israelis claim that “giving up territories” and providing weapons to the Palestinian Authority constitute fatal mistakes, some Palestinians say that the accords facilitated an Israeli ploy to expand settlements and “subcontract the occupation.” Nevertheless, Masri believes that the Oslo Accords and the peace process that followed it in the 1990s reflected a genuine effort to achieve peace. “Arafat called Rabin ‘my brother Yitzhak.’ He really believed in him. I also truly believed that Rabin and the Israelis were honest about their desire for peace,” says Masri.Yet, he believes that just when the peace process started to gain steam, it suffered a severe blow on the night of November 4, 1995. He recalls that night, saying “Arafat called me and asked ‘have you seen the news?’ When I realized Rabin was assassinated, I thought it was a disaster for us. I was very sad.”According to Masri, the Israeli will to achieve peace ended after Rabin’s assassination. “Rabin’s successors failed to complete his legacy. Shimon Peres had the chance to make peace, but he didn't,” says Masri. “Oslo was a good opportunity, but it never materialized and became ambiguous, especially after Netanyahu was elected.” 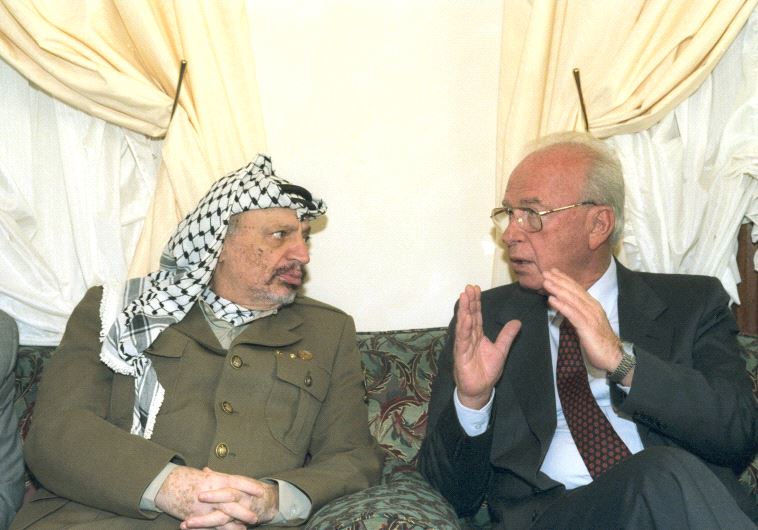 Prime Minister Yitzhak Rabin meets with PLO chairman Yasser Arafat in Casablanca on October 30, 1994 (photo credit: SA’AR YA’ACOV/GPO)Wake-up callAfter 20 years of negotiations, Masri remains both pessimistic and optimistic. He feels that there is no Israeli leader who is willing to make the necessary sacrifices for peace, but is still hopeful that a peace accord ending Israel’s military rule is possible.“I call on the Israelis to wake up!” he says, now sitting upright in his seat. “They should consider themselves a part of the region.”He thinks that a peace accord needs to allow for the emergence of two independent states, but also two states that are integrated into the greater Middle East. In his perspective, the Arab Peace Initiative has the best chance at accomplishing that goal. “I believe that this initiative is a great opportunity. We recognized the State of Israel, there’s nothing more to be done on our side. You need to decide, will you take the API, or be an occupier?” says Masri.In 2002, the Arab League, a pan-Arab body, endorsed the API, which calls for the establishment of a Palestinian state along 1967 borders, “a just and agreed upon resolution” to the refugee problem, and 57 Muslim-majority and Arab states’ recognition of Israel. The government initially did not respond to the API, but more recently Prime Minister Benjamin Netanyahu said that the API contains “positive elements” and expressed his willingness to negotiate amendments to its language. However, when addressing Israeli security concerns, Masri dismisses the notion that the establishment of a future Palestinian state would lead to a greater state of instability and violence. “If Palestinians are given their state, they will live in harmony with Israel. The Palestinian state will have to behave like a state and will not be able to attack Israel. Khaled Mashaal [the chairman of the Hamas Politburo], said on May 4, 2014, that if Israel accepts the API, he will adopt the peace initiative.” Masri also rejects the assertion that PA President Mahmoud Abbas is not a partner for peace. He believes Abbas, with whom he maintains ties and sometimes meets, can sign a peace deal with Israel. “Abbas is carrying not a branch but an entire olive tree. The Israeli people need to decide, it is no longer upon us. Accept what Abbas is saying to you. We have given everything there is.”Furthermore, Masri remarks that Israelis should stop portraying themselves to the world as victims. “Israel is always afraid. We, the Palestinians, are the victims here; we are living in a jail. The occupation’s objective is to preserve the idea of the Jewish state. They say that Israel is here to save the West from the ‘Islamic sea.’ I think it’s nonsense,” he says. “All that is needed is that Israel stops the building in settlements and accepts the Arab initiative. Here it is, it is an excellent opportunity. All Arabs and Muslims would accept it.” FOR NOW, without peace talks on the horizon, Masri believes in a non-violent struggle that would pressure Israel to make compromises for peace. In particular, he backs the Boycott, Divestment and Sanctions movement. “I support BDS,” he says. “I support civil disobedience, but when the occupation will end and we will get our freedom people from both nations could love and marry each other.“We must change the reality. We can live here in harmony, I believe in that,” Masri concludes.