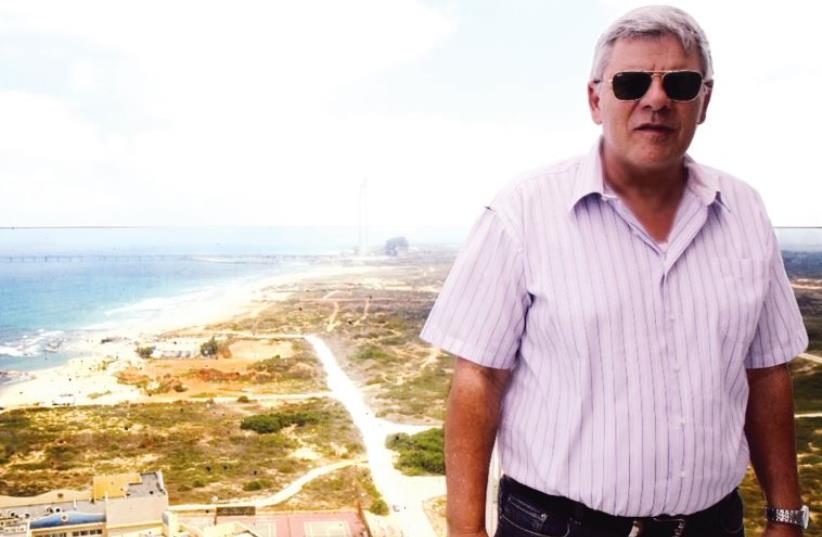 Hadera Mayor Tzvika Gendelman on a seaside balcony
(photo credit: Courtesy)
Hadera is a city located midway between Tel Aviv and Haifa; yet in contrast to neighboring Binyamina to the north, it has become something of a favorite with young professional families.Standing astride the Haifa-Tel Aviv railway line and main highway, this is an excellent location for professionals because they can easily get to work anywhere along the coastal strip. But while Binyamina has become the abode of the beautiful and (somewhat) rich, Hadera has remained something of a backwater.Like many Israeli towns, Hadera developed from an agricultural settlement founded in Turkish Palestine in the late 19th century. One of a cluster of five area settlements, the others being Pardess Hanna, Givat Olga, Zichron Ya’acov and Binyamina, Hadera’s lands were bought in 1891 by Yehoshua Hankin and settled by pioneers from Lithuania and Latvia.
Read More...
They had a rough time, as most of the land was swamp suitable for raising water buffaloes and reeds – not the kind of land preferred by the settlers, who wanted to raise wheat and vegetables. They had to undertake the backbreaking work of draining the swamp and planting Australian eucalyptus trees, which consume prodigious amounts of water, and to bring in expert labor from Egypt to assist.Slowly but surely, the swamps were drained, and vegetables and citrus trees were planted. But it was a costly endeavor in human lives; old tombstones in the local cemetery reveal that out of a population of 540, 210 died of malaria.Hadera developed slowly, but it soon took on a double identity as an agricultural settlement and a market town for the surrounding areas, which quickly developed into an administrative center.Its population began to grow strongly after independence, when the state was practically inundated by wave upon wave of new immigrants. Hadera has grown steadily since 1948, when the city had a population of 11,800. In 1955, the population almost doubled to 22,500; in 1961, it rose to 25,600; in 1972, to 32,200; and in 1983 to 38,700.The population doubled during the 1990s, in the wake of the mass immigration from Russia. The city now has over 80,000 inhabitants, and is set to double again in coming years.The socioeconomic mix, however, has remained more or less the same – based on demand for real estate from families and individuals who cannot afford the more expensive surrounding areas, such as Netanya to the south and Binyamina and Zichron Ya’acov to the north.This has had a stabilizing effect on housing prices, and as Avi Koresh, the Hadera concessionaire of the Re/Max Real Estate Brokerage told Metro, “Prices in Hadera are steady. They fell slightly last year in the wake of the social unrest, but now they are back on track.”Yet things are bound to change in the future due to the new Park neighborhood.When completed, it will have 7,500 residential units, adding 30,000 new residents. The new area is meant to attract the professional classes to a less expensive alternative to Binyamina and Zichron Ya’acov, but the apartments are to be of a very high standard and will incorporate all of the latest technologies – altering Hadera’s socioeconomic status.This is the reason the municipality promoted the plan; the idea was to take advantage of the city’s excellent transportation connections, so as to attract relatively well-off and well-educated families and individuals.The neighborhood is situated in the eastern part of Hadera, so named because the municipality has planned a large park in its center, which will include an artificial lake, an open-air amphitheater, public physical training equipment that can be used free of charge and bicycle trails.Park is a multiphase project. The first phase of 2,100 units is being implemented now, with semi-detached dwellings as well as 18-floor residential tower blocks and seven- floor apartment building; this phase will also include schools, a commercial center and health facilities.One of the many development companies participating in the project is Shikun & Binui, which is building the Park Dreams project. Dorit Sadan, vice president of sales and marketing, told Metro, “We were surprised by the level of demand in the neighborhood...Park’s very central location is a winner.When Route 9 is completed, it will connect the area to the Trans-Israel Highway, thereby upgrading the already excellent road links of Hadera.“When completed, the new neighborhood will completely change the face of Hadera.”Prices in the Park neighborhood are lower than in the surrounding towns but higher than in Hadera as a whole. In Hadera, the average price for a four-room apartment in a 15- to 20-year-old building is from NIS 800,000 to NIS 900,000; a three-room apartment costs from NIS 100,000 to NIS 150,000 less. A fourroom average apartment in the new Park development can cost from NIS 1.2 million to NIS 1.3m.
Cancel Subscription