Expert to ‘Post’: The Saudis are justifiably alarmed by the prospects of a neighboring country falling under the influence of a resurgent militant Islamist power. 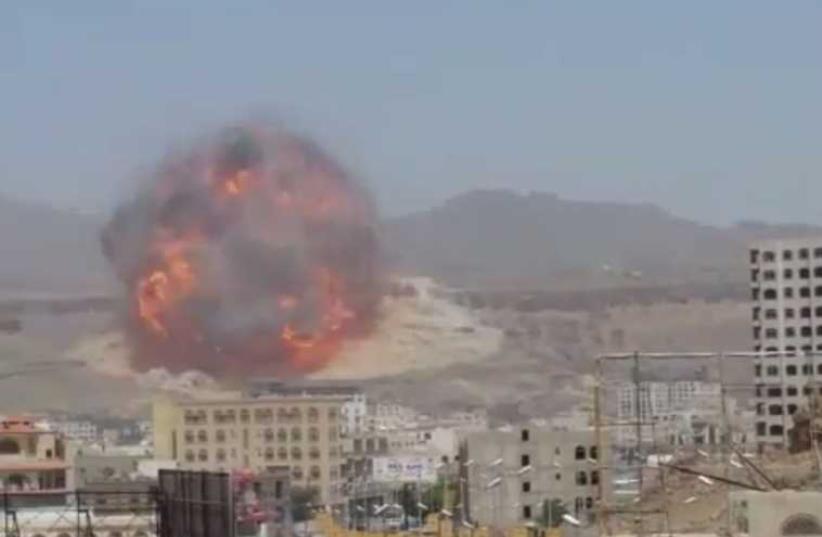 Camera films moment of biggest blast in weeks in Sanaa.
(photo credit: screenshot)
Advertisement
The period of proxy wars and dependency on Western military leadership in the Middle East is ending as Arab states show their growing confidence in carrying out military operations in Yemen and with the US-led coalition against Islamic State in Syria, increasing the likelihood of regional war.Since the First Gulf War (1990-91) when Iraq invaded Kuwait and the Syrian army withdrew from Lebanon in 2005, the Middle East has not witnessed full scare state army invasions into neighboring states – but times are changing.With the exception of Israel, Middle Eastern states have been relying on attacking their enemies by proxy, supporting terrorist groups such as Hamas or Hezbollah, attacking their own citizens in civil uprisings or supporting clandestinely specific ethnic groups or parties in opposing states. Iranian support for the Houthis in Yemen is but one recent example.For the most part, especially since the First Gulf War, Middle Eastern states have participated in wars against other regional states only when part of a Western-led (mainly US-led) coalition.The Libyan intervention in 2011, where France, Canada and other European countries took the lead, but did have some Arab participation, is similar in nature to the US-led air strikes against Islamic State today, where some Arab forces are participating.But the intervention in Yemen by the Saudi-led coalition is something different as it is for the most part a completely Arab run endeavor with some background US intelligence or logistical support.“Watching Saudi Arabia spend hundreds of billions of dollars on sophisticated weapons in the past decade, many friends and foes of the oilrich kingdom often wondered to what extent it would be capable of using them,” wrote Yaroslav Trofimov in The Wall Street Journal last week. “By sustaining nearly a month of intensive air strikes in Yemen, Saudi Arabia has shown that – from a purely military standpoint – it can lead a lengthy and complicated campaign.”Could growing Arab capabilities and confidence lead to future interventions – even ground invasions – perhaps in Syria? To compound the issue, the chance of a small incident triggering a regional war cannot be dismissed.Last week Saudi jets intercepted two Iranian cargo planes headed for the capital, Sanaa, forcing them to turn back and prompting the Foreign Ministry in Tehran to summon the Saudi chargé d’affaires.Imagine that the Saudi jets shot down the Iranian planes and escalation ensued.Prof. Efraim Karsh, a Middle East and Mediterranean studies scholar at London’s King’s College and a senior research associate at the Begin-Sadat Center for Strategic Studies at Bar-Ilan University, told The Jerusalem Post that he sees the Saudi-led offensive on Yemen as essentially defensive.“The Saudis are justifiably alarmed by the prospects of a neighboring country falling under the influence of a resurgent militant Islamist power, and these fears are exacerbated by Washington’s seeming acquiescence in Iran’s regional hegemony and likely transformation into a nuclear power,” he said.Karsh asserts that the Saudis could even “establish covert collaboration with Israel to this end.”“The Arab states and Israel collaborated tacitly during the 1991 Gulf War, foiling Saddam’s attempt to break the war coalition by firing missiles at Israel,” he said.Asked if he sees a Saudi- led coalition taking military action in Syria, Karsh responded, “Syria is not Yemen” as the former is not a neighbor and is infinitely stronger.