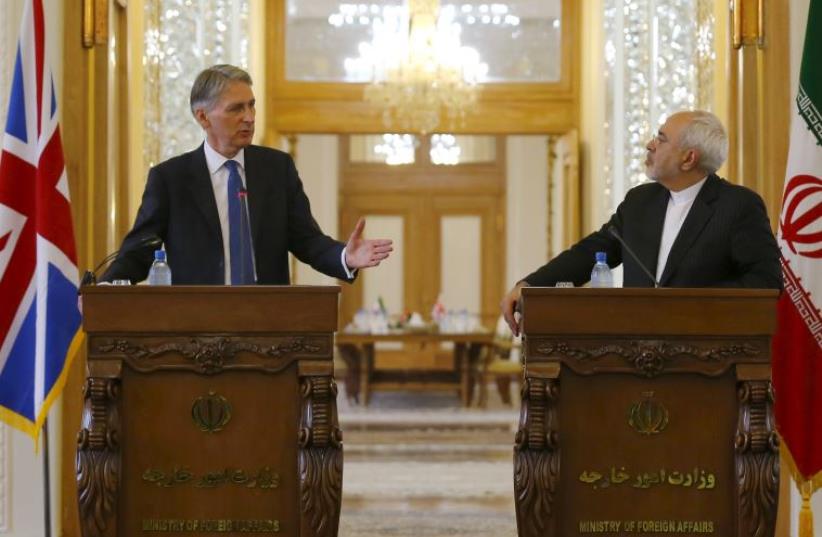 Britain's Foreign Secretary Philip Hammond (L) and Iran's Foreign Minister Mohammad Javad Zarif speak during a news conference in Tehran
(photo credit: REUTERS)
Advertisement
The pernicious results of European companies selling technology to the Islamic Republic are already well known: They range from widespread surveillance of Iranians to the transfer of dual-use equipment that can be used for torture, killing and the construction of nuclear weapons.Yet, with the lifting of sanctions, Western leaders have relegated concerns about Iran’s misuse of European technology to political oblivion. Current snapshots of European political comments and reports of trade deals reinforce the view that ordinary Iranians will suffer at the hands of their clerical leaders.According to an August 4 Persian-language report from the state-controlled Mehr News Agency, an Iranian information technology official announced a joint project with an unnamed “foreign company” to start phase two of a “targeted filtering” program that is designed to censor “websites and networks that commit social harm.”There is a long history of nefarious business deals in the field of communications between Iran and the West. For example, in 2008, the Finnish-German venture Nokia-Siemens sold the regime advanced surveillance equipment. When Iranian democrats poured into the streets in 2009 to demonstrate against the fraudulent presidential election, the regime activated its Nokia-Siemens technology to block social media and mobile communications among the protesters.Berlin’s economic affairs minister, Sigmar Gabriel, and a representative of the German engineering giant Siemens AG were part of a business delegation that visited Tehran last month.In a second August report from Mehr News, Iran’s minister of information and communication technology, Mahmoud Vaezi, outlined a plan for “smart filtering” of social media to censor “immoral” content.Vaezi issued an ominous warning to Iranian mobile phone users: “But the [government’s] principle is that the people’s work is correct. If they correctly use virtual space, there will be no need for checking.”He added, “It is incorrect that people think the government has knowledge about inside [the country] and no knowledge on the outside. Users must know that all information is transferred through a gateway and it all exists inside the country.”Iran’s enhanced censorship plan has three phases.First, information technology experts will filter content that is viewed as ethically unsavory.Second, the system will be restricted via an elaborate gateway mechanism “through Internet operators and companies providing these services.”Third, the “smart” filtering system will be embedded in data centers.Vaezi’s statements indicate the regime has not pulled back on its exploitation of Western technology to crush dissent in the Islamic Republic. And few European politicians have any desire to restrict exports of security equipment to Iran.However, Volker Beck, a Green Party deputy in the Bundestag, told The Jerusalem Post earlier this month, “Germany should not sell security technology to dictatorships like Iran, Saudi Arabia or Russia. And goods should not be exported which can be used there for torture or the implementation of the death penalty.”Beck lamented that there is no legal requirement in Europe to stop the deliveries of sophisticated security technology to outlaw regimes.His comments have not found an echo among European political leaders. Instead, the unbridled enthusiasm for business with Iran continues to mushroom in the EU.Luxembourg’s Foreign Minister Jean Asselborn declared, “Iran is back in the international community.”Writing in the International New York Times on Tuesday in a column titled, “Few doubts in Europe on Iran deal,” Celestine Bohlen contrasted the opposition in the US to the nuclear deal with its near universal acceptance in Europe.Camille Grand, director of the Strategic Research Foundation in Paris, told Bohlen, “In Europe, you don’t have constituency against the deal. In France, I can’t think of single politician or member of the expert community who has spoken against it, including some of us who were critical during the negotiations.”European political leaders appear to be, wittingly or unwittingly, in state of dogmatic denial about the dangers of the nuclear agreement. After all, it is worth noting that Iran and its proxies have murdered Iranian Kurds, European civilians and French service personnel across Europe and in Lebanon, The initial $150 billion in sanctions relief afforded to the Islamic Republic will be a massive shot in the arm for its terrorist activities.After the celebrations over the revival of EU-Iran trade, ordinary Iranians are to pay an even heavier price for expressing dissent and calling for democracy.Benjamin Weinthal is a fellow at the Foundation for Defense of Democracies.