The Manila Times says it received a copy of a Saudi dispatch to Filipino authorities indicating that plan has reached an "advanced stage." 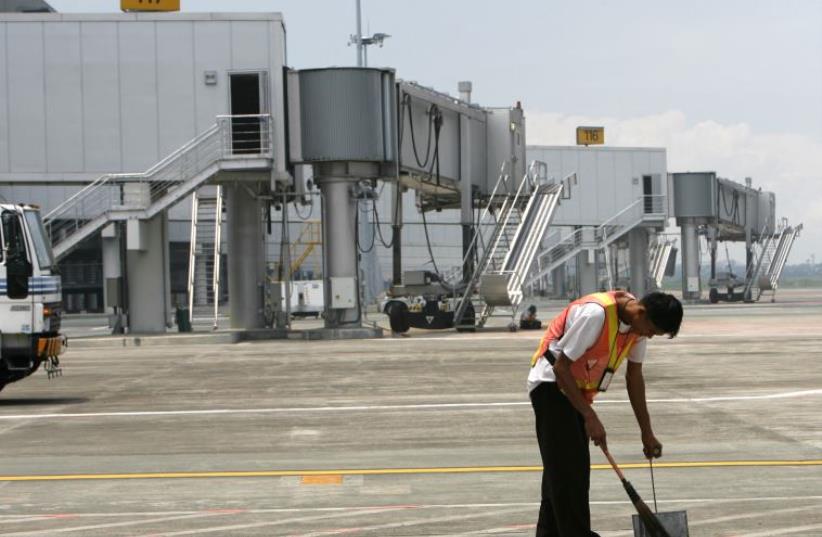 A maintenance worker sweeps the tarmac of Terminal 3 of Ninoy Aquino International Airport
(photo credit: REUTERS)
Advertisement
A terrorist plot to hijack or bomb a Saudi Arabian passenger plane in Southeast Asia has reached an "advanced stage" of implementation, the Manila Times reported on Sunday.    The news outlet cited "a reliable airport source," that warned of the threat of a terrorist attack that would be carried out somewhere in Southeast Asia after Iran warned of "divine revenge" against Saudi Arabia following the kingdom's execution of the Shi'ite cleric Nimr al-Nimr last month.   The source said it was possible that the terrorist plot would be launched in Malaysia, Indonesia or the Philippines.The source said that the Saudi embassy in Manila informed the Department of Foreign Affairs that intelligence in Riyadh received information that Iranian Revolutionary Guards were planning to mount the attack.  The Manila Times said it obtained a copy of the confidential Saudi communication,  written by a retired Saudi admiral dated in January of this year that indicated that the plan has reached an "advanced stage." "The implementing and planning team is said to consist of 10 persons and six of them are Yemeni nationals tasked to execute the plan, and some of them have already been identified,” the dispatch revealed.    The names of the suspects were withheld although the news outlet said it is believed that they "have already left Iran for Southeast Asian countries through Turkey on two separate flights to execute the plan."The airport source said that the names of the six suspects were forwarded to Philippine immigration.  The source said that earlier this month Saudi officials made an "extremely urgent request" of the Manila International Airport Authority to allow them to put up their own X-ray machines at the Ninoy Aquino International Airport. The source said the request, that was being reviewed, was "a necessary security measure for intensifying and tightening inspection procedures at Philippine international airports used by passengers traveling on Saudi Arabian planes."