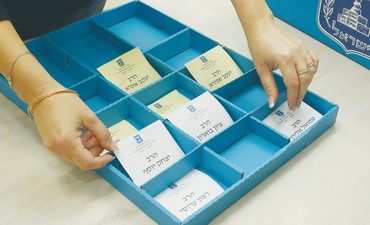 Both races feature face-offs between the religious-Zionist and ultra-Orthodox camps. Religious Zionists support Stav and Eliyahu, while haredim back Lau and Yosef. Stav has the backing of Bayit Yehudi, Yisrael Beytenu and Hatnua, while Shas leaders are campaigning intensively for Yosef and Lau.The election of Yosef, the son of Shas mentor Rabbi Ovadia Yosef, is considered key to the survival of the party. Shas faction chairman Ariel Attias said that based on conversations with nearly the entire electorate, he was positive Yosef would win. Attias dismissed the chances of Boaron, who has the backing of outgoing Sephardi Chief Rabbi Shlomo Amar.Electing Stav and Eliyahu would mean a major victory for Bayit Yehudi chairman Naftali Bennett. Eliyahu has gained support following attempts by Attorney-General Yehuda Weinstein to prevent him from running, due to past statements Weinstein deemed racist. A group of protesters demonstrated against Eliyahu's candidacy outside of the polling station in Jerusalem on Wednesday.  Meretz leader Zehava Gal-On on Wednesday called the Chief Rabbinate a corrupt and nepotistic institution.Gal-On said the Chief Rabbinate is an institution that "promotes homophobia and the exclusion of women and non of the candidates intend to change this."She added that the institution represented Orthodoxy and was "not interested to forward a more progressive and pluralistic Judaism." Gal-On called for the need to separate religion from state in Israel, abolish the official standing of the Chief Rabbinate and cease its funding. Prime Minister Binyamin Netanyahu has refrained from endorsing a candidate, although he is considered close to Lau’s father, former Ashkenazi chief rabbi and current Tel Aviv Chief Rabbi Yisrael Meir Lau.This election might be the last race for the Chief Rabbinate in which both an Ashkenazi and Sephardi chief rabbi will be elected: Bayit Yehudi and Hatnua both support a proposal by Likud MK Moshe Feiglin to elect only one chief rabbi when the term of the rabbis named on Wednesday ends in 10 years. Bennett and Justice Minister Tzipi Livni of Hatnua sent a letter to the chief rabbi candidates on Tuesday stating their intention to merge the two chief rabbi positions.According to the Bennett-Livni proposal, one rabbi will hold the chief rabbi position, while another will serve as the president of the High Rabbinical Court.Livni and Bennett intend to implement their initiative in the term of the rabbis elected on Wednesday, their letter said.Jerusalem Post staff contributed to this report.