Forensic study shows that suspect in the assassination of Hamas commander in Dubai, alleged Israeli spy were not the same man.

By REUTERS
FEBRUARY 15, 2013 23:46
Mabhouh Zygier
(photo credit: Courtesy, Reuters)
Advertisement
LONDON - A forensic report commissioned by Reuters said on Friday that a suspect in the assassination of a Hamas commander in Dubai and a deceased Australian immigrant, reported to have been an Israeli spy, were not the same man.Click here for full JPost coverage of this storyIsrael has released few details on the case of Melbourne-born Ben Zygier, reported to have been a Mossad recruit found dead in an isolated prison cell in Israel in 2010. The silence has led to widespread speculation about the man's secret arrest and alleged crime.The Kuwaiti newspaper Al Jarida on Thursday quoted unidentified Western sources as saying Zygier took part in the killing by a Mossad hit-team of Hamas operative Mahmoud al-Mabhouh in Dubai in January 2010.Zygier is believed to have been arrested in February 2010.In 2010 Dubai released images of 26 suspects, taken from CCTV footage and from forged passports they were believed to have been traveling on. Footage showed some suspects apparently in different disguises, some of them in wigs.Reuters commissioned a comparison of Zygier's photos and that of one of the Dubai hit squad suspects most likely to have been Zygier, were he to have been one of the 26 people implicated by Dubai police and traveling under a false identity and in disguise. 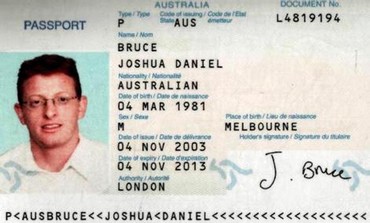 The passport copy of a man identified by Dubai authorities as Joshua Daniel Bruce of Australia (Reuters)That suspect would likely have been a man who according to Dubai police traveled with a forged Australian passport under the name Joshua Daniel Bruce, born in Melbourne, which is also Zygier's birthplace.The facial comparison report by Anley Consulting Forensic Imagery Analysis in Dorset, England, that compared Zygier's photos with the image of the person in the forged Bruce passport, concluded that they were not the same man.Mossad squadAustralia complained to Israel in 2010 after Dubai said forged Australian passports were used by the Mossad squad. Mabhouh's killers, authorities in the emirate said, also had British, Irish, French and German passports.Joshua Daniel Bruce is believed to be an alias of the man in the forged passport's photo, which also appears on INTERPOL's wanted list. He appears to be of the same age group as the 34-year-old Zygier was and from all 26 suspects he bears the most resemblance to Zygier.A second facial comparison expert contacted by Reuters said, based only on a preliminary review of the photos, that there were some similarities in the men's faces that could not totally exclude the possibility of them being the same person, but that two major discrepancies made that unlikely.The Kuwaiti newspaper report did not single out any of the 26 Dubai hit squad suspects as being Zygier. It is possible that others involved in Mabhouh's assassination were not caught on camera or identified by investigators.Israel has not confirmed or denied involvement in Mabhouh's killing.Media reports in Australia have said that Zygier carried out Mossad missions abroad while using Australian passports and traveling under different names and that he was under Australian intelligence investigation for espionage.Israel has neither denied nor confirmed Zygier was a Mossad officer. It has only said that in 2010 it held a dual-nationality Israeli in prison under a false name for security reasons and that this man committed suicide in jail.A lawyer who advised Zygier said he was charged with "grave crimes" and that he denied the allegations against him.