Soldier opens fire on vehicle on Route 60 killing Rabbi Dan Mertzbach and wounding 2 others en route to Cave of the Patriarchs; IDF opens probe into what appears to be violation of military's open fire regulations.

By YAAKOV KATZ
NOVEMBER 11, 2011 09:21
Otniel shooting_311
(photo credit: Udi Zagir)
Advertisement
An IDF soldier opened fire on a vehicle in the Hebron area of the West Bank on Friday, killing Rabbi Dan Mertzbach, 55, of the Otniel settlement and injuring two other women. The passengers were traveling to the Cave of the Patriarchs in Hebron for morning prayers.  IDF sources said that an immediate investigation was launched to determine what caused the soldier to open fire in what appeared to be a violation of the military's open fire regulations. RELATED:
'IDF troops shot at journalists covering W. Bank protest'The car was first spotted by the IDF near Beit Hagai at approximately 5 a.m. driving suspiciously, an IDF source said. Beit Hagai is one of the most threatened settlements in the southern West Bank. Four settlers were shot and killed in the area in August of last year, prompting the IDF to be on high alert ever since.After spotting the vehicle, the IDF position passed its details to a command post, that then dispatched a nearby force to intercept the car.The soldiers from the Lavi Battalion of the Kfir Brigade spotted the car on Route 60 between Beit Hagai and Kiryat Arba. They did not have time to deploy a checkpoint, instead attempting to use flashlights to flag down the vehicle. 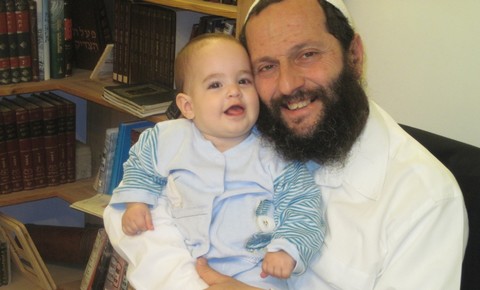 The car failed to slow down, continuing to drive at what soldiers interpreted as fast speeds. One of the soldiers fired eight bullets, hitting the driver and both passengers. The car then swerved to the other side of the road and stopped. Soldiers ran toward the car, and one of them was hit by a passing truck, suffering light injuries.Mertzbach was critically injured and eventually pronounced dead on the scene. One of the car's passengers was shot in the shoulder and the second was shot in the thigh. The injured were evacuated to hospital. "This is a grave incident, we are investigating to ensure that these kinds of things do not happen in the future," a senior IDF source said.There was no indication from the preliminary investigation that the car was at all terrorist related, except for the fact that the driver was driving fast, on a dark road, very early in the morning. Mertzbach, who served as a rabbi for several surrounding communities, was scheduled to be laid to rest later on Friday.
Advertisement
Subscribe for our daily newsletter