Appaholic: When smartphones save lives

By ZOHAR FRIEDMAN
NOVEMBER 20, 2012 11:37
The iPhone 5 on display 370
(photo credit: Beck Diefenbach / Reuters)
Advertisement
In light of the rocket attacks from Gaza and the security concerns that have hit Israel in recent weeks, this week's Appaholic presents you with two important apps that will help you and your family stay safe during the duration of the conflict.Code RedThe Hebrew words "Tzeva Adom" literally translate into "color red." However, Israelis use the phrase to refer to Code Red air raid sirens, which signal impending rocket attacks. As many of our readers may know, since last week, these sirens have been ringing virtually non-stop in the South. They have also sounded in Israel's center, including in Tel Aviv and Jerusalem.  To assist in alerting Israelis to the presence of the siren, the app developer Kobi Snir designed the free Tzeva Adom (Hebrew) smartphone app. The app allows users to select a location where they'd like to be alerted for Code Red, and even to customize the sound of the alarm signaling an impending rocket.

Click for full JPost coverageThis app will prove especially helpful for jittery Israelis who may find themselves mistaking other sirens – such as ambulance and police sirens that have been ringing with increased frequency lately – for an air raid siren. This is also especially helpful for those who are hearing impaired, wearing headphones, or for whatever reason miss the admittedly powerful siren. 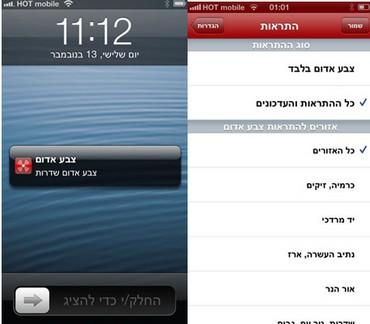 Cost: Free
Supported formats: iPhone, iPod touch, iPad; AndroidFor those interested in receiving general alerts on how often and where the Code Red alarm sounds, we suggest you check out the Twitter user Tzeva Adom, which posts tweets in real-time documenting in English when and where air raid sirens sound in Israel.

Run for coverLately, sirens have become almost commonplace in Israel. Still, even in the face of constant rocket attacks, Israelis remain resilient and are for the most part unwilling to sequester themselves indefinitely in protected rooms and bomb shelters.  However, despite putting forth an effort to maintain a degree of normalcy throughout periods of conflict, many citizens fear finding themselves stranded in the open during an air raid siren, with no clue where the nearest shelter might be located. 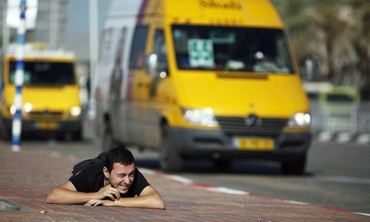 Enter the Secure Spaces app (Hebrew), a free program developed by Sigal&Eyal Aferiat that helps residents locate the nearest protected shelter as quickly as possible. The app uses the GPS function of your smartphone to locate the nearest bomb shelter. According to the app's description, Secure Spaces lists information volunteered by residents who would like to share their "secure spaces" with their neighbors and fellow countrymen. 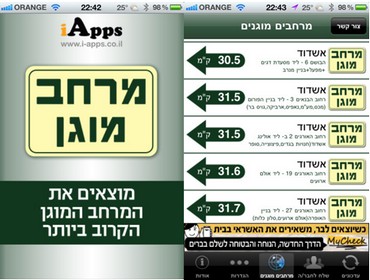 Cost: Free
Supported formats: iPhone, iPod touch, iPad; AndroidAppaholic is a bi-weekly column which thematically reviews mobile apps with a Jewish or Israeli twist. If you have an app to suggest, send details to appaholic.jpost@gmail.com The writer is The Jerusalem Post‘s Social Media Manager
Advertisement
Subscribe for our daily newsletter