Why do the British royals refrain from official state visits to Israel?

While Prince Charles has attended two state funerals in Israel, he has never come on an official state visit; neither has Queen Elizabeth. 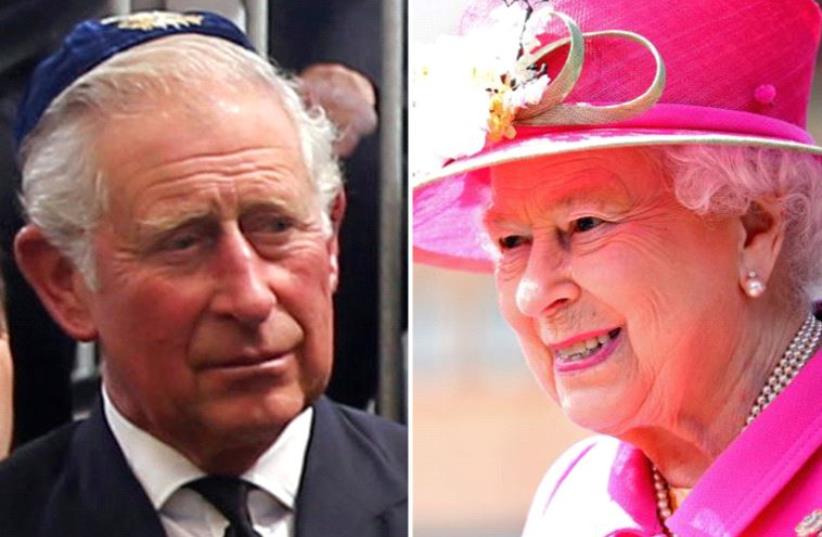 Prince Charles and Queen Elizabeth
(photo credit: REUTERS)
Advertisement
Much ado has been made of the private visit by England’s Prince Charles to his grandmother’s grave in Jerusalem following his attendance at the funeral of Shimon Peres, Israel’s ninth president, last week. What should have been seen as a simple act of filial piety was placed instead in a different historical context, that of the alleged sensitivity of the Princess of Battenburg’s final resting place at the convent of Saint Mary Magdalene on the Mount of Olives.It was alleged, for example, that the royal family has refrained from visiting the site because of its location in the eastern part of Jerusalem, and its desire to remain neutral in the Israeli-Palestinian conflict.The fact that the British Consulate is located in east Jerusalem has never been cited as a danger to British neutrality. Similarly, the Commonwealth Cemetery on Mount Scopus housing the remains of British soldiers from World War I regularly commemorates their sacrifice.And as far as neutrality goes, Charles had no problem attending the Peres funeral on Mount Herzl, which the Palestinian narrative lays claim to no less than to Tel Aviv and the rest of the “occupation.”Princess Alice of Greece was an outstanding example of courage and compassion. She was recognized by Yad Vashem as Righteous Among the Nations for giving shelter to Jews in Nazi-occupied Athens.She died in 1969 and was first buried in St. George’s Chapel in Windsor. However, in 1988 her wish to be buried in Gethsemane on the Mount of Olives was fulfilled. Alice wanted to be buried at the Russian Orthodox convent near her aunt Elizabeth, the Grand Duchess of Russia, who was murdered by the Bolsheviks and declared a Russian Orthodox saint.Charles visited both graves, placing a special floral tribute on both. He had brought a bouquet of royal purple flowers from the home of his maternal grandmother to place at the grave of his paternal grandmother, Alice. The bouquet came from the garden of Birkhall in Scotland, which was once the home of Queen Elizabeth the Queen Mother. He also placed flowers at the grave of the Grand Duchess.Why all the secrecy? Does the heir to the throne really believe that visiting his grandmother’s grave would compromise British neutrality, such as it is? Charles’s visit was meant to be private, but given the media glut for the Peres funeral, it was not long before word got out, accompanied by a suffusion of photos and the inevitable social media commentary.The comments ranged from tasteless to thoughtful.But a bigger question looms: Why does the British royal family refrain from making an official visit to Israel that is not in the context of a state funeral? While Charles has attended two state funerals – Peres’s and prime minister Yitzhak Rabin’s in 1995 – he has never come on an official state visit. Neither has Queen Elizabeth.Elliott Abrams, a former deputy head of the US National Security Council under President George W. Bush, has suggested that the royal family’s refusal to make a state visit to Israel is a reflection of bias against the Jewish state. “The continuing failure or refusal of any royal to make an official or state visit to Israel is an anomaly that suggests bias, and undermines potential British influence in the region,” Abrams wrote for the Council on Foreign Relations in 2014.We are not sure what the reasons are. Is it because the royal family fears that an official visit would harm ties with the Arab world, or is it that they only visit other royals, like in Saudi Arabia or Abu Dhabi? We don’t know. Nevertheless, it is strange that in 68 years, the royal family has not visited Israel in an official capacity – this despite the long history the Jewish people shares with the United Kingdom.The royal family will have an opportunity soon to make amends. Next year, Israel and the UK will mark the 100th anniversary of the Balfour Declaration, which supported the establishment of a national home for the Jewish people in the Land of Israel.Balfour wrote the letter in the name of “His Majesty’s Government.” After 100 years, it is time for the current majesties to show where they stand.