The discovery of the Afghan Jewish documents also raises the timely question whether more treasure troves of Jewish historical items in the Middle East and Central Asia are waiting to be unearthed. 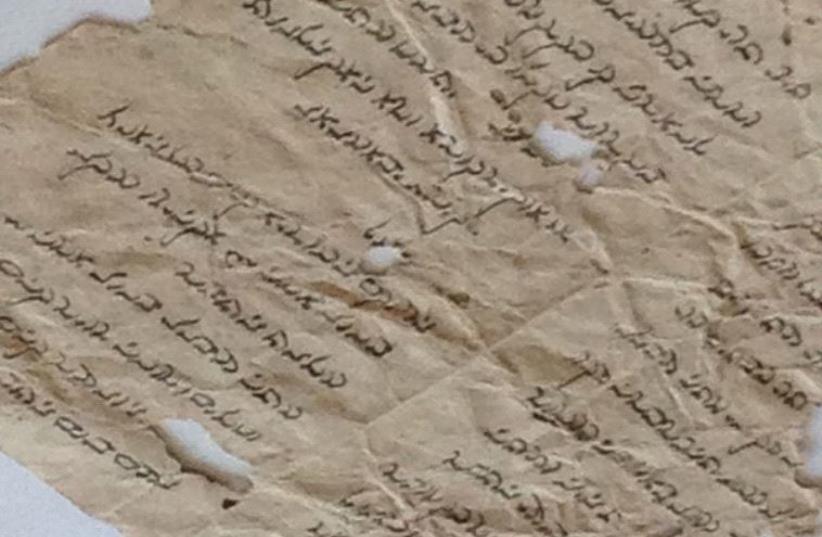 ONE OF the Afghan manuscripts.
(photo credit: COURTESY SARA AHARON)
Advertisement
Five years ago researchers were amazed to learn that hundreds of rare medieval Jewish documents from Afghanistan, dating from the 11th to 13th centuries, had been discovered. These documents pre-dated the Mongol invasion of the early 13th century and had potential to shed breathtaking new light on a time that we know very little about, precisely because the Mongols destroyed most traces of the communities they touched. Said to have been found in the caves of Bamiyan in northern central Afghanistan, an area that may sound familiar from the Taliban’s destruction of the great Buddhas of Bamiyan, the documents’ existence became known after they landed in the hands of antiquities dealers scattered across cities from Europe to Israel.Now the most recent acquisition of 250 of these medieval Afghan texts by the National Library of Israel, made public in September 2016, promises to reveal tremendous new insights and information about Jewish life in the Middle East and Central Asia a thousand years ago. These items join the National Library’s existing collection of 29 documents, acquired in early 2013, from the same Afghan archive. Written in several languages, including Persian, Arabic, Judeo-Persian, Judeo-Arabic and Hebrew, the documents may reflect their authors’ journeys as they made their travels across the lands of the Middle East using the Silk Road.I had the great pleasure and opportunity of visiting the National Library and meeting its head Judaica curator, Dr. Yoel Finkelman, in September to learn about and view several of the documents. We spoke about how unique and fortunate discoveries like this are – fragments 1,000 years old, from remote areas of Afghanistan.He explained that this medieval Jewish community, since almost certainly destroyed later by the Mongols, should therefore be considered as a separate population from the Jewish community of Afghanistan in the 19th and 20th centuries. In the modern period Afghanistan’s Jewish community numbered about five to six thousand people, with about a thousand living in the capital, Kabul, and the rest in Herat. Most emigrated in the decades after Israel’s founding to the new Jewish state or to New York. We have scant evidence, though, about the size or nature of Afghanistan’s Jewish population in the 11th to 13th centuries. If we’re very lucky, this collection may help reveal such details and unravel the puzzles about daily life at that time.Viewing rare items from a millennium ago with one’s own eyes, from a remote part of the world extraordinarily difficult to access, is a surreal and moving experience. For starters, I had expected to see small fragments, thinking of the tiny pieces from the Cairo Geniza. I was stunned that many of the Afghan Jewish documents were very large – a full page or a half page – with mostly legible handwritten Hebrew, Arabic, or Persian letters. That means, I hope, that the potential for scholars to decipher the documents and uncover their stories is fairly high.Interestingly, not all of the 250 documents from the new acquisition contain Jewish elements. About 150 pieces, written in Persian and Arabic, date from the 12th and early 13th century, and several of their authors seem to be Muslim traders. Some documents from this collection are legal in nature and focus on trade, but are not necessarily written by traders themselves.The other 100 documents, researchers now believe, do not come from a Jewish communal geniza (repository of sacred documents) as originally surmised, but from the private collection of a Jewish family, led by one Abu Nassar Ben Daniel.These documents date earlier, from the 11th century, and vary from letters and articles related to the family’s trading business to handwritten copies of religious and biblical texts. Notably the collection includes part of a Talmudic section from the Mishna in Avodah Zarah, significant because, reports Yediot Aharonot, this document is now “the earliest evidence of religious literature in the Persian-speaking east.”This Ben Daniel archive can offer exciting new knowledge regarding the Jews’ socioeconomic and religious life in Afghanistan and, importantly, on the larger connections between the Afghan Jewish community and the wider Jewish world.One of the documents we saw contained handwritten Shabbat prayers, perhaps originally part of a prayer book. A single page included the special blessing said on challah (hamotzi lehem min ha’aretz) and a section from the Amida portion specific to Shabbat day prayers (Yismach Moshe bematnat helkho ki eved ne’aman karata lo).

“These are the same words that we say every Shabbat,” said Dr. Finkelman, referring to the Amida lines, “but this is from Afghanistan a thousand years ago.”It appears then that this Shabbat prayer already had been standardized, and spread far across the Jewish world.Since the collection in its entirety includes Jewish and Muslim writers and many languages, it also has substantial potential to show us what life meant for the greater region’s numerous Jewish communities, local Muslim communities, and the relationships between the two. The documents convey, said Dr. Finkelman, that Bamiyan’s Jews and Muslims lived relatively well together. We have receipts written between Jews and Muslims showing that they traded and conducted business with one another.He further pointed out that all the Afghan documents, surprisingly, were made from paper, not parchment. Paper was available in this region even 10 centuries ago but many other nations had to rely on parchment due to paper’s scarcity.Thinking about the delicacy of paper and how these thin documents, records of forgotten Jewish history, survived all those years to make their way to an independent Jewish state was another of many inspiring moments during the visit.The National Library of Israel says it plans to digitize the new collection and make them accessible for scholars and the public. About 500 more documents from the Ben Daniel collection are rumored to still be in the possession of antiquities dealers, promising more revelations.Discoveries of this scale often raise as many questions as answers. Will we get to see responsa, the classic form of questions-and-answers from Jewish communities to leading rabbis and yeshivas of the day, about their personal, professional, socio-economic, religious and family lives? Did the Ben Daniel archive and the other 150 documents written by Muslim traders belong to that one family, or rather two – perhaps many more – owners? Will we catch even a glimpse of mentions of women and children? Thus far, said Dr. Finkelman, we do not have marriage contracts (ketubot) or divorce documents. But considering the hundreds of medieval Afghan Jewish documents still with antiquities dealers, who knows what surprises lie in wait.The astounding discovery of the Afghan Jewish documents also raises the timely question whether more treasure troves of Jewish historical items in the Middle East and Central Asia are waiting to be unearthed or else face being destroyed, or simply lost to history forever, given the region’s instability. We already know about the Iraqi Jewish archive, the collection of centuries-old Jewish items stolen by Saddam Hussein’s Mukhabarat, the feared secret police, that the American army stumbled upon and recovered from a Mukhabarat basement in 2003.The Iraqi Jewish collection now lives in the National Archives in Washington, DC. It’s likely that similar archives, collections, and genizas still remain in Syria, Iran, Egypt, Iraq and many other cities and countries in the Middle East and Central Asia that had a Jewish presence for hundreds of – and, as demonstrated with the Afghanistan collection, even a thousand – years. Afghanistan’s medieval Jewish documents and the ongoing valiant work by the Jewish community and the National Library of Israel to recover them highlights the meaning of salvaging our own history, all the while making us wonder: what else is waiting to be found?The writer is the author of From Kabul to Queens: The Jews of Afghanistan and Their Move to the United States.
Advertisement
Subscribe for our daily newsletter