The Russian economy is in a bad shape. 20 million Russians are now living in poverty, up 50 percent for the past two years, and the highest rate for the past 10 years. 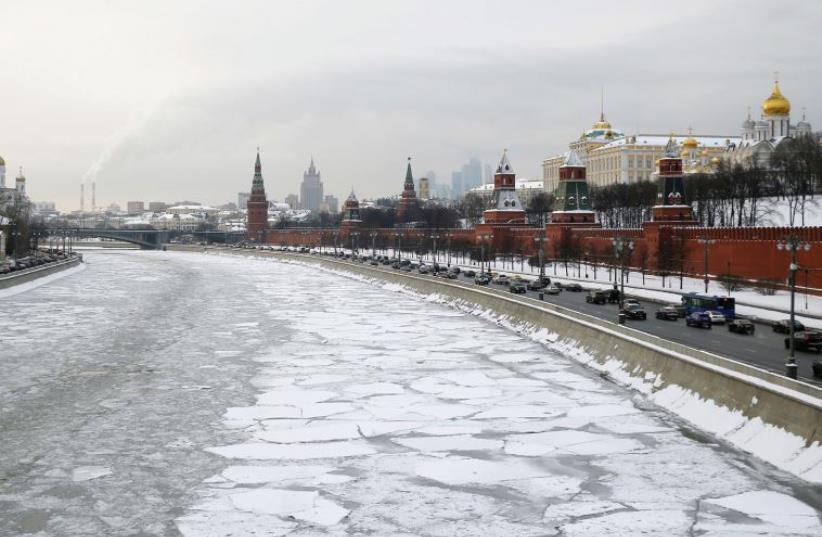 AN ICE floe drifts past the Kremlin in Moscow in winter.
(photo credit: REUTERS)
Advertisement
Despite prognoses of upcoming turbulence and collapse, the majority of Russians will not protest against the current government even if the country defaults and its social system crashes. Russians have grown accustomed to living in a state of a permanent daily crisis and not seeking help from anybody, including their own authorities. It is no longer important for Russians who and how rules them because the result will always be similarly bad.Institutionalized corruption has created a firmly established public image of authorities as being perpetually corrupt. Therefore, it does not matter how many facts of corruption the famous Russian blogger Alexey Navalny publishes – it will not find any public response at all. Russian Prosecutor General Yury Chaika’s sons’ links to the bandits who slaughtered a family of 12, or Dmitriy Peskov’s (Russian President Vladimir Putin’s spokesperson) watch having a price tag equivalent to 7,000 of Russia’s minimum pensions – surprisingly, these egregious facts caused no major public backlash in Russia and it is unlikely that anything else could.People in Russia no longer believe that their government could function better; therefore, there is no reason to replace one evil with another. Russians have just learned how to stop worrying and live in the permanent crisis. This way of thinking leads to public apathy and releases the authorities from any form of accountability. Thus, Russians are more interested in blaming external forces for their problems than local officials.The Russian economy is in a bad shape. 20 million Russians are now living in poverty, up 50 percent for the past two years, and the highest rate for the past 10 years. Wages also dropped by 11% in 2015 and the total volume of unpaid wages reached, according to official statistics, 3.89 billion rubles ($47.3 million). Based on the National Agency for Financial Studies (NAFS) survey every third Russian also had to cut food spending recently.However, Russians perceive the current crisis not as a result of their authorities’ lack of effort to diversify the economy for the past decade but as a global conspiracy against their country by Americans and Arab Gulf States with oil-price manipulations. Russians scored poorly according to the S&P Ratings Services Global Financial Literacy Survey and only 38% understand how money works in the world, versus 57% of Americans. Similar conspiracies are also responsible in the public mind for the collapse of the USSR, when president Ronald Reagan met the Saudi king and secretly agreed to lower oil prices to cripple the Soviet economy.It is crazy but it is true – there are popular YouTube songs in Russia urging the country to get rid of the dollar and retain only the Russian ruble, backed by gold.Television remains the major source of information for the majority of Russians and it only depicts the full-blown crisis throughout the world – but not in Russia. For many people in Russia who have never traveled abroad, which is roughly 70% of the entire population, wars and suffering in Ukraine and Syria are caused by Western meddling in the domestic affairs of these nations and support from the local traitors.Russia, on the other hand, is perceived as an oasis that should be maintained in peace; calls for social and political change might drag the country into a similar chaos.In fact, caring about social and political transformations is considered to be in opposition to key Russian values.Natalia Tikhonova, a professor at the Higher School of Economics, Russia’s top research university, reported during the conference at Levada Center, a Russian independent polling organization, that 40% of Russians value family and friendship, and the ability to live “an honest life.” In contrast, only 5% of respondents would like to influence processes within the society. Levada Center also found out that 63% see the collapse of the USSR “negatively” and 37% would be happy to return to a Soviet-style state.Democracy and the Western lifestyle are perceived as way too regulated by many Russians and as antagonizing the free Russian spirit and, thus, as not suitable for Russian society. According to Russians, their country should have its own unique way that is similar to the one that has been advocated by Vladimir Putin for years.The perception of the current economic crisis as a conspiracy, and the rejection of the Western way of life, help Putin top national rankings as in a public mind he has already managed to get the country back on track before. Russians have passed through the default of 1998 and the crisis of 2008. The fact that recovery also came within a year or two adds trust to the current government. According to a poll conducted by Levada Center in late November of 2015, 57% of respondents would prefer to see Putin reelected as president in 2018.