JPost Editorial: What is B’Tselem?

Human rights should transcend politics, and Israel, like other democracies, appreciates criticism and gets plenty of it domestically and internationally. 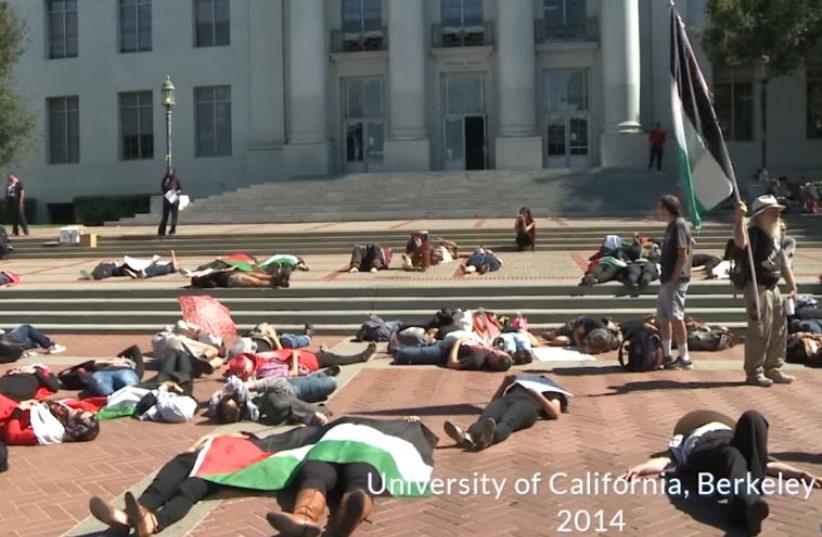 Anti-Israel protest at UC Berkeley
(photo credit: YOUTUBE SCREENSHOT/CROSSING THE LINE 2: THE NEW FACE OF ANTI-SEMITISM ON CAMPUS)
Advertisement
Human rights organizations such as B’Tselem serve an important role in maintaining Israel’s robust democracy.They subject our government, military and legislation to relentless scrutiny.After Operation Cast Lead, for instance, B’Tselem, and to a lesser extent other organizations, provided extensive assistance to the UN fact-finding mission headed by South African justice Richard Goldstone. B’Tselem also facilitated meetings between Palestinians living in Gaza who claimed they were the victims of war crimes perpetrated by Israel, and IDF Military Police who were investigating those incidents.Petitioning the Supreme Court, B’Tselem has contributed to the creation of more oversight when it comes to Israeli operations and government policy regarding Palestinians who live in the West Bank.The late prime minister Yitzhak Rabin famously expressing his frustration with the effectiveness of human rights NGOs when he voiced his desire for a state “without the High Court and without B’Tselem.”On its website, B’Tselem says its role is to “document and educate the Israeli public and policy makers about human-rights violations in the Occupied Territories.”And B’Tselem often remains faithful to this role. In March, for instance, one of the group’s volunteers, Imad Abu Shamsiyeh, filmed Sgt. Elor Azaria shooting a disarmed, injured Palestinian in the head after he had carried out a stabbing attack in Hebron. The footage sparked a nationwide debate over excessive force and IDF values.B’Tselem employs Israelis, which is one of the reasons for its appeal. The organization is perceived as an Israeli group exposing Israeli crimes in order to achieve a more just Israeli society.Admittedly, organizations like B’Tselem enjoy very little local support. Most of their budgets are provided by European governments and American foundations.Their concern with the violation of Palestinians’ human rights is not shared by many Israelis who see these violations as the result of Israel’s attempts to defend itself against Palestinian terrorism. This does not though diminish from the importance of the role of NGOs as watchdogs of Israel’s democracy.Nevertheless, B’Tselem showed its true face over the weekend when its executive director Hagai El-Ad appeared before the UN Security Council to call for the UN to take action against Israel’s settlements. This was just the latest example of how B’Tselem and many other organizations have long ago moved from being human rights groups to organizations engaged in blatant political advocacy.B’Tselem was not just trying to educate Israelis with the hope that they would change their policies from within, but rather the organization was aiding – even initiating – international efforts to pressure Israel to adopt policies rejected by Israelis repeatedly in democratic elections.“With every breath they take, Palestinians are breathing in occupation,” El-Ad told the special UN Security Council session titled “Illegal Israeli Settlements: Obstacles to Peace and the Two-State Solution.” He claimed that “ever-present” settlers live in a first-world community “that exists only for them.”Israel, El-Ad added, used the peace process “to buy time” to establish facts on the ground for the settlements.“The UN Security Council must act and the time is now,” he concluded.While some of El-Ad’s claims bear validity, he crossed the line that separates the operations of an impartial guardian of human rights from a political advocacy group that openly calls on the international community to take unilateral steps against Israel.His appeal to the Security Council reflects a position that rejects direct negotiations between Palestinians and Israelis in favor of international intervention to coerce Israel into relinquishing control over the West Bank, even if this means a potential severe deterioration in the country’s security.Human rights should transcend politics, and Israel, like other democracies, appreciates criticism and gets plenty of it domestically and internationally. But organizations like need to decide what they are. It seems B’Tselem has made up its mind.