As a critical transit point on China’s New Silk Road, Israel could become an essential part of the global trading ecosystem. 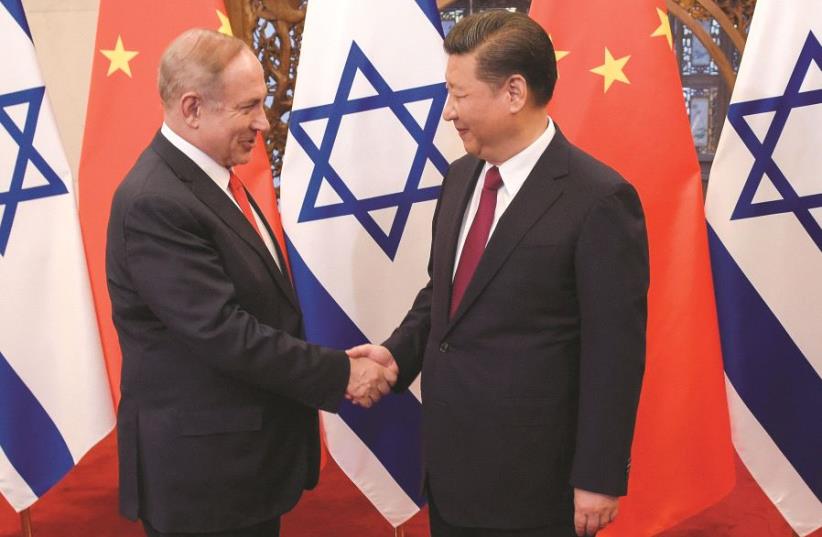 Le président chinois Xi Jin Ping et Benjamin Netanyahu
(photo credit: REUTERS)
Advertisement
If the name Xi Jinping doesn’t ring a bell, you are not alone. According to a 2017 survey funded by China’s Education Ministry, only seven percent of Israelis know who he is.Mr. Xi is China’s president. To be precise, he is also the general secretary of the Communist Party and the chairman of the Central Military Commission, nominated both “the Core” in 2017 and “Great Leader” in 2018 – monikers previous held only by People’s Republic of China founder Mao Zedong.In 2013, Mr. Xi laid out a new path for China’s development. At the heart of his plan lies the Belt & Road Initiative (BRI); a modern-day silk road that aims to improve trade and economic integration across Asia, Europe, Africa and the Middle East. The multi-trillion-dollar initiative includes free-trade agreements and infrastructure development projects such as roads, ports and railways. The BRI comprises both an economic land “Belt” across Eurasia and a maritime “Road” connecting coastal Chinese cities to Africa and the Mediterranean.Israel could play a pivotal role in China’s BRI as a connector between Asia, Africa and Europe both as a land bridge via Jordan and a sea-land bridge from the Red Sea. The BRI presents a unique opportunity for Israel to broaden and diversify its economy. As a critical transit point on China’s New Silk Road, Israel would become an essential part of the global trading ecosystem.But what do Israelis think about China, its people, and their ambitious initiative?The study mentioned above was initiated by Dr. Li Wei, a Research Fellow from the Institute of Middle Eastern Studies (IMES) of China’s Northwest University, and conducted in collaboration with Israeli pollster Kalman Gayer. Leading the project in Israel was Dale Aluf, director of research and strategy at SIGNAL (Sino-Israel Global Network & Academic Leadership), a China-focused think tank based in Israel. 451 Israelis were surveyed between May and June 2017 to understand what Israelis think of China, its people, and the BRI.The survey found that Israelis appear rather fond of China. Upwards of 75% of Israelis reported that the two nations share a close friendship, and most also believe China to be an important partner for Israel.These sentiments are not surprising. Israel and China share an ancient connection – Jews once traded along the old Silk Road, and China provided a safe haven for Jews fleeing from the Holocaust. Today, China is Israel’s No. 3 trading partner and the largest in Asia. China is playing a pivotal role in the management of the Haifa port, as well as the construction of the Ashdod port and the Tel Aviv Light Rail.Even with thriving economic synergy, and recognition of China as being an important partner for the Jewish state, Israelis have little awareness of the BRI and China in general. According to the study, only 15% of Israelis have heard of the BRI, and more than half reported not knowing whether China is playing a positive role in global politics or not. At the same time, the study also revealed that 90.4% of Israelis wish to learn more about China.After being presented with information about the BRI, roughly 70% of Israelis welcomed the initiative – most of whom believe that the BRI would greatly benefit the global community. These results imply that there is excellent potential for China to obtain support for the Belt and Road Initiative among the Israeli population.However, as the authors of the study highlight, there is a pressing need to spread awareness about the initiative among the Israeli public. If actions are not taken to explain the BRI to Israel’s citizens, these positive perceptions may change. Some respondents expressed concern that the initiative may have a hidden agenda. These sentiments, which presently only represent a small minority of the Israeli public, could increase over time.Providing people with accurate information about the BRI will help them assess the initiative on its merits. It would also raise awareness of the many opportunities that exist for Israeli cooperation within the framework of this geo-economic mega-initiative.
The new Chinese Culture Center in Tel Aviv, which aims to boost exchange and cooperation between the two countries, might be one avenue through which to educate the public about the BRI in Israel. To find out, SIGNAL asked Mr. Wan Tiunji, who heads up the new branch in Tel Aviv.Wan confirmed that promoting the BRI is one of his center’s goals: “The Belt and Road Initiative is a Chinese government policy seeking to connect Asia and Europe. We are a government institute. In this policy, we will do some related activities such as lectures and bringing in experts from both countries to make the local people understand as well as to clarify this policy and to explain how the Israeli people can benefit from this policy.”When asked if Israel stands to benefit from participating in the BRI, Wan replied, “I think the potential is huge for Israeli companies. Israel has very good companies that can cooperate with China and they can benefit through this policy.” Wan is right. If Israel seizes the current window of opportunity, the economic benefits would be immense. An invested population would only further increase the prospects of realizing Israel’s aspirations of becoming a beneficiary of China’s Belt and Road Initiative.
President Xi once said that “China needs to learn more about the world, and the world also needs to learn more about China. I hope you will continue to make more efforts and contributions to deepening the mutual understanding between China and the countries of the world.”Considering the increased role China is playing in the global arena, Israel would do well to internalize President Xi’s suggestion.Dr. Li Wei is a Research Fellow at the Institute of Middle Eastern Studies (IMES) at Northwest University, China.