Rivlin: We don’t need to be afraid in our own country

“We are in a war with our enemies who do not want us here," Rivlin tells high-school students in Kfar Etzion. 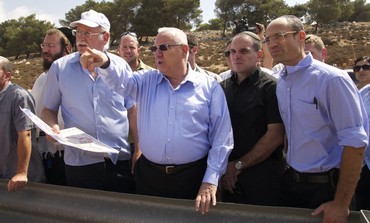 “Why should I be afraid to travel home when school is over?” a friend of one of the captive teenagers asked Reuven Rivlin, when the president- elect on Monday afternoon came to visit their small high-school in the Kfar Etzion in the Gush Etzion region of the West Bank.Gil-Ad Shaer and Naftali Fraenkel, both 16, were kidnapped last Thursday from a hitchhiking post near their school, the Makor Chaim Yeshiva, as they made their way home for the weekend.Rivlin came to the school’s campus of small one-story oneroom buildings to reassure their classmates that the IDF was doing everything possible to find their friends.Before he arrived the pupils sang religious songs in the school’s packed sanctuary, as they waited for news of their friends. “Why should I be afraid in my country, which is a Jewish country” the teen asked. He sat in the back of a room lined with bookshelves, filled with religious texts. Prayer shawls hung over some of the books.He was the first pupil to question Rivlin.The state of Israel is the fulfillment of a 2,000 year old dream, Rivlin told him.“We expected that not everyone would want us here. There are those who think our land is their land,” Rivlin said as he reassured the pupils that they were safe, in spite of what had happened to their friends.“We are in a war with our enemies who do not want us here. But we are the sovereign power here, and we will be here whether they want us here or not.“We have to ensure our security. Thankfully, we have an army. Soon you will be soldiers.I was once a soldier. I want to tell you that you do not need to be afraid in your land, that is a Jewish and democratic land, but there are threats that we have to overcome, and we have to find a way to eliminate those threats,” Rivlin said.“We are in a moment of anguish and the emotion breaks out. We were able to fulfill our [Zionist] dreams because we knew that we could build a Jewish and democratic land,” Rivlin said.“We shouldn’t be afraid to go anywhere in this land, whether in sovereign areas of the country, or in territories that we returned to in order to redeem them, your question is one that many people have,” he said.“There are moments that test us, until today we have withstood all those tests and we will continue to do so,” Rivlin said.He assured that the IDF doing everything possible, turning over every stone, to bring their friends home safely.