Nikki Haley, born Nimrata Randhawa in 1972, is an American politician who served as the United States’ ambassador to the United Nations under the Trump administration and as governor of South Carolina. Originally from South Carolina, she is the daughter of Sikh Indian immigrants. Haley converted to Christianity as an adult. Haley published an autobiography in 2012, and received an honorary doctorate in public service from the University of South Carolina. She is married to Michael Haley. The couple has two children. Early life and political career After studying accounting at Clemson University, Haley started working for her family’s business, Exotica International. She became president of the National Association of Women Business Owners in 2004. In 2004 Haley successfully campaigned as a Republican for a seat in the House of Representatives. She remained in office after being unopposed in the 2006 elections, and was re-elected in 2008. She voted as a conservative, supporting tax cuts, immigration enforcement and the pro-life movement. As governor In 2010 Haley successfully ran for governor of South Carolina with the support of members of the Tea Party movement. In addition to being the first woman to hold this position, she was also the first Indian-American to do so. Haley had a successful first term in office, fostering a growing economy and gaining growing approval ratings. She won re-election in 2014. A long-time supporter of Israel, as governor Haley signed into law a bill meant to stymie efforts by the Boycott, Divestment, Sanctions (BDS) movement. In 2012, Haley was considered by Mitt Romney as a vice-presidential candidate, but stated that if selected she would decline. In 2015, Haley came under national attention when a racially-motivated shooting in a South Carolina church resulted in the deaths of nine African-Americans. Following the shooting, Haley stated in an interview that the shooting should be labeled a hate crime, and signed a bill to have the Confederate flag removed from the South Carolina State Capitol. In 2016 Haley gave the Republican Party’s response to Barack Obama’s final State of the Union address. In it, she criticized Obama and his administration, but also called upon Republicans to take responsibility for their share of America’s problems and to take measures to be more inclusive of all Americans. As UN Ambassador Haley had originally endorsed Ted Cruz for president in 2016 and had been critical of Donald Trump, but eventually voted for the latter over Hillary Clinton in the presidential elections. She was chosen by Trump to serve as the United States’ ambassador to the United Nations under his administration. In 2017 she resigned as governor in order to begin her new role at the UN. Although supportive of immigration reform, Haley has stated that she would never support a Muslim ban should President Trump choose to enact one. When discussing the Middle East at a security council meeting in April 2017 Haley said that Iran and Hezbollah are to blame for conducting terror attacks against the region, and that in order to attain Middle East peace the world first needs to tackle Iran. In December 2017 she defended Trump’s recognition of Jerusalem as Israel’s capital at the UN, saying that it would “fastball the peace process going forward.”

Nikki Haley: 'If Biden comes in, all of the progress we made goes away'

The former UN ambassador said that China is the number one threat to the US and that many US leaders have been naive about it, including former president Barack Obama and vice president Biden.

By OMRI NAHMIAS
20/07/2020
Nikki Haley: Trump right to threaten to withhold WHO funding

"This is even bigger than the World Health Organization, this is about China's influence into these multilateral organizations," Haley said.

He "guaranteed" that Trump with throw Pence "under the bus" due to his handling of the coronavirus, saying that the task is an unwinnable battle for the vice president.

Prior years has seen the award given the Israeli Ambassador to the United States Ron Dermer and the Republic of Guatemala.

‘When the [PA] realizes that they don’t have the backing they think they have, I think we might see a shift’

The former US Ambassador to the UN said that people can always say the American peace plan is released too soon or too early, “you can’t win in this situation.” 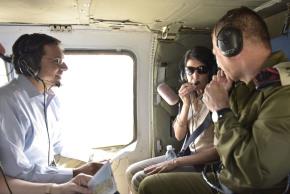 Former US Ambassador to the United Nations, Nikki Haley was the guest of honor at the Iranian American Jewish Federation of New York (IAJF)'s annual gala.

1 Mossad brought Chinese coronavirus vaccine to Israel
2 Yair Netanyahu: The rise of the son
3 Moderna's chief medical officer explains why their vaccine is better
4 European Jewish population at lowest share for a millennium and declining
5 Living in Azerbaijan as a Jew versus being Jewish in Armenia