Temple Mount: The ordinary made holy

The most important religious site was for centuries a mere elevated hill where farmers threshed wheat.

By WAYNE STILES
NOVEMBER 12, 2012 14:33
Temple Mount aerial from north 370
(photo credit: BiblePlaces.com)
Advertisement
Wayne Stiles has never recovered from his travels in the Holy Land. Follow him on Twitter (@WayneStiles) or on his blog at www.waynestiles.com.Abraham saw the acreage. David bought the lot. Solomon built the house. Nebuchadnezzar tore it town. Zerubbabel rebuilt it. Herod the Great expanded it. Titus flattened it again. Before these temples stood on Mount Moriah, it was nothing but a hill used for threshing wheat. Hardly worth noticing. But today, the Temple Mount remains the most precious piece of real estate in the world. And the golden shrine that graces its crest has become an icon for the Holy City of Jerusalem itself. After Abraham, it took 1,000 years for the second domino to fall—for David to build. But the dominoes have not stopped falling yet. Abraham saw the acreageThe site of the Temple Mount first appeared on the scene when God told Abraham to go to the land of Moriah and sacrifice Isaac there (Genesis 22:2). The Binding of Isaac climaxed with the Lord providing a ram for Abraham to sacrifice in the place of his only son. Thus the saying began: “In the mount of the Lord it will be provided” (Genesis 22:14). David bought the lot and Solomon built the houseOne millennium after Abraham, King David purchased the threshing floor of Araunah the Jebusite as a site to offer sacrifices after his David’s sinful census (2 Samuel 24:18-25).
In the same area where Abraham came to offer Isaac, and on the very hill where David offered burnt offerings for his sin, Solomon began to build the First Temple on Mount Moriah in 966 BC (1 Kings 6:1; 2 Chronicles 3:1). 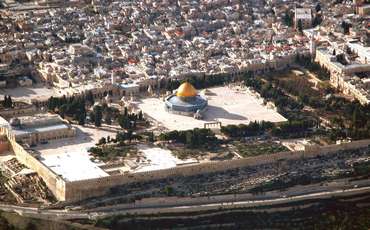 Temple Mount aerial (Bibleplaces.com)The original size of the Temple Mount was smaller than the outline we see today, which is Herodian. Leen Ritmeyer has convincingly argued in his excellent volume, The Quest, that the Mishna’s measurements of a 500-cubit square Temple Mount fit with the archaeological evidence. •    At the bottom of a staircase to the northwest of the Dome of the Rock lies a large step precisely 500 cubits (750 feet) from the eastern wall. Ritmeyer points to this step as the top of the pre-Herodian western wall.  The step since has been covered over with new pavement. •    Along the outside of the eastern wall of the Temple Mount, a seam in the wall clearly joins two sections of wall built at different eras. If the older part of this seam forms the pre-Herodian corner of the 500-cubit square Temple Mount, then the Dome of the Rock covers the spot where the Temple stood—including, of course, the Holy of Holies. Nebuchadnezzar tore it down and Zerubbabel rebuilt itThe Babylonians under King Nebuchadnezzar tore down the First Temple on the 9th of Av in 586 BC. It had stood for 380 years. The exiled Jews returned to their land after 70 years when Cyrus the Great allowed them to rebuild the Temple. The structure Zerubbabel erected seemed modest in comparison to Solomon’s magnificent edifice. Following the first Maccabean triumphs, the Jews improved it even more.Herod the Great expanded it and Titus flattened it againThe most elaborate reconstruction and renovation occurred when Herod the Great began his extensive building project that would crown the Second Temple. Herod expanded the Temple Mount north, west, and south to its present dimensions of thirty-five acres. After Herod the Great expanded the hill, its topography lay hidden beneath acres of backfill and retaining walls. The construction of Herod’s marvelous temple began in 20 BC and continued for 83 years. 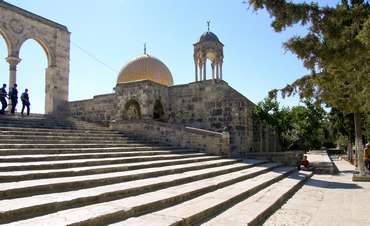 RitmeyerThis was the Temple Jesus knew, whose destruction he predicted (Matthew 24:1-2). The Southern Steps of the Temple Mount where pilgrims walk today would have felt Jesus’ sandals too. In AD 70 Titus rolled in his Roman legions and destroyed in a matter of days what had taken decades to construct. Stones from the Second Temple still lay in the first-century street where archaeologists found them. The rest is history The Muslim ruler Abd el-Malik built the shrine called the Dome of the Rock on the Temple Mount between AD 688-691. Its golden veneer is a 20th-century addition. The Central Valley and the Kidron Valley have risen in elevation due to centuries of debris from wars and renovations. What’s more, Muslims forbid any archaeology on the Temple Mount today. 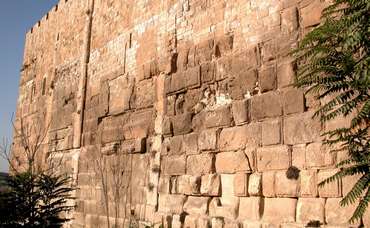 Temple Mount seam (BiblePlaces.com)As a result, archeologists and historians do their best to piece together history from the plentiful remains surrounding the Temple Mount. In addition, after years of sifting through tons of bulldozed rubble from the Temple Mount—that was dumped in the Kidron Valley—the Temple Mount Sifting Project has discovered finds from the Second Temple period including arrowheads, paving tiles, ancient seals, coins, combs, jewelry, game pieces, weights—and more. The Holy Land and the Holy City owe their designations to a hill where the Holy of Holies resided for centuries. The Temple Mount remains the most photographed spot in Jerusalem and the goal of many pilgrimages—even to today.It’s amazing that the most important religious site in the world was for centuries a mere elevated hill north of Jebus where farmers threshed wheat. The ordinary was made holy. Wayne Stiles has never recovered from his travels in the Holy Land. Follow him on Twitter (@WayneStiles) or on his blog at www.waynestiles.com.