James Comey on his conversation with US President Donald Trump: "I took it as a very disturbing thing, very concerning." 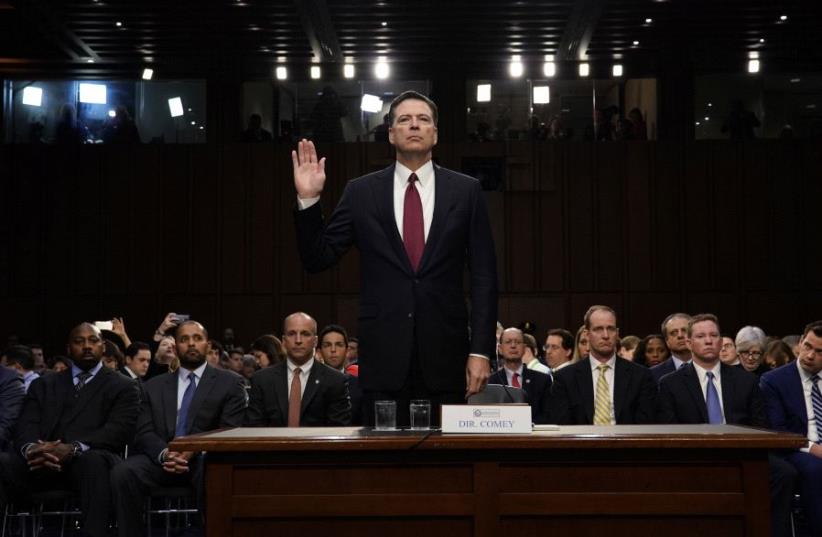 Former FBI Director James Comey is sworn in prior to testifying before a Senate Intelligence Committee hearing on Russia's alleged interference in the 2016 U.S. presidential election on Capitol Hill in Washington, US, June 8, 2017
(photo credit: REUTERS)
Advertisement
WASHINGTON – In explosive Senate testimony on Thursday regarding his relationship with President Donald Trump, former FBI director James Comey said he: • Kept notes of his conversations with Trump because he was concerned the president “might lie about the nature” of their interactions;• Orchestrated a leak of those notes in hopes that would lead to the appointment of a special counsel on the case of Russia's interference in the 2016 presidential election;• Was “confused” by Trump saying he was fired because of the Russia probe; • Hoped there were tapes of his private conversations with Trump “and I’ll consent to the release of them”; • Told Trump he was never specifically under investigation during his time as FBI director; and • Felt the Trump administration “chose to defame me,” telling “lies, plain and simple” about him.In two-and-a-half hours of testimony before the US Senate Select Committee on Intelligence, Comey stopped short of using the term “obstruction,” but he did detail a series of “stunning” conversations with Trump in which he felt the president directed and pressured him to end an inquiry into former national security adviser Michael Flynn, who lied to fellow Trump administration officials about his communications with Russian government agents last winter and fall.Speaking publicly for the first time since his May 9 firing rocked the US, Comey said he was concerned when Trump dismissed others from the Oval Office in February to speak with him alone about the investigation of Flynn. Trump, Comey testified, said Flynn “is a good guy. I hope you can let this go.”“Why did he kick everybody out of the Oval Office?” Comey asked. “That, to me as an investigator, is a very significant fact.”Comey told the committee that he didn’t “think it’s for me to say whether the conversation I had with the president was an effort to obstruct. I took it as a very disturbing thing – very concerning.”Comey said that Trump had asked him the previous month for his personal loyalty.The conversations gave Comey the impression that Trump sought a “patronage relationship” and was ordering him to end the federal probe.“I was fired because of the Russia investigation,” Comey testified, “to change the way the Russia investigation was conducted. That is a very big deal.”In a speech in Washington on Thursday, Trump told supporters their movement was “under siege,” and vowed to fight on.“We’re under siege... but we will come out bigger and better and stronger than ever,” he said. “We will not back down from doing what is right. We know how to fight and we will never give up.”Comey detailed his practice of writing detailed memos of all his interactions with Trump. He admitted passing those memos to a friend at Columbia Law School after his firing, hoping they would ultimately reach the press and create a groundswell for the appointment of a special counsel.Indeed, the deputy attorney- general did appoint a special counsel – former FBI director Robert Mueller – on May 17, after Trump publicly admitted firing Comey over his handling of the Russia investigation.Seventeen US intelligence agencies have determined that Russia meddled in the 2016 presidential election, seeking to hurt Democratic nominee Hillary Clinton and helping Trump, the Republican candidate. Comey testified a month before his firing that the FBI was investigating collusion between Moscow and the Trump campaign.The former FBI head also said the Trump administration defamed him in comments made after his firing by saying the bureau was in disarray and that the workforce had lost confidence in its leader.“Those were lies, plain and simple,” Comey said.Comey said Trump did not attempt to get him to drop the overall Russia investigation, just the part that related to Flynn, who the president fired in February for misleading Vice President Mike Pence about the extent of his conversations last year with Russia’s ambassador to the United States.Russia has denied any allegations about efforts to influence the 2016 presidential election, and Trump’s campaign colluding with Moscow. The White House has also denied any collusion.As Comey was testifying, a White House source said Trump disputed two key points in Comey’s testimony: that he asked the FBI director to let go of the Flynn probe and that he asked for Comey’s loyalty.Trump’s son Donald Trump Jr. fired off a series of tweets attacking Comey, but the president himself stayed off social media while the drama played out in Congress.