Former US national security adviser Michael Flynn, facing up to five years in jail, was prepared to testify that before taking office Trump had directed him to make contact with Russians. 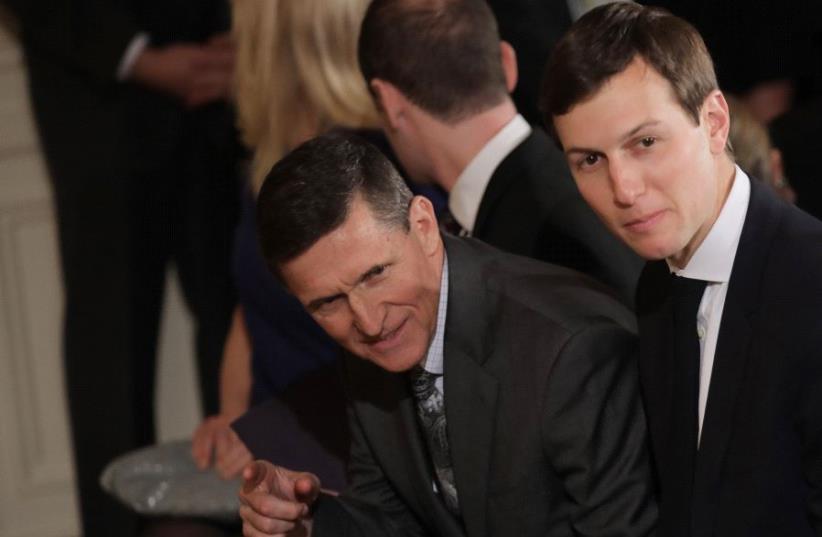 White House Senior Advisor Jared Kushner and former National Security Advisor Michael Flynn.
(photo credit: REUTERS)
Advertisement
WASHINGTON - Former national security adviser Michael Flynn pleaded guilty on Friday to lying to the FBI about his contacts with Russia and agreed to cooperate with prosecutors delving into the actions of President Donald Trump's inner circle before he took office.The dramatic turn of events also raised new questions about whether Trump's son-in-law, Jared Kushner, had a role in those discussions.Flynn was the first member of Trump's administration to plead guilty to a crime uncovered by special counsel Robert Mueller's wide-ranging investigation into Russian attempts to influence the 2016 US election and potential collusion by Trump aides.Under a plea bargain deal, Flynn admitted in a Washington court that he lied when asked by FBI investigators about his conversations last December with Russia's then-ambassador, Sergei Kislyak, just weeks before Trump took office.Prosecutors said the two men discussed US economic sanctions against Russia and that Flynn asked Kislyak to help defeat or delay a UN vote seen as damaging to Israel. On both occasions, he appeared to be undermining the policies of outgoing President Barack Obama.They also said a "very senior member" of Trump's transition team had told Flynn to contact Russia and other foreign governments to try to influence them ahead of the vote.Sources told Reuters that the "very senior" official was Kushner, a key member of Trump's transition team and now the president's senior adviser.Kushner's lawyer, Abbe Lowell, did not respond to multiple requests for comment. He has previously said Kushner has voluntarily cooperated with all relevant inquiries and would continue to do so.Flynn's decision to cooperate with Mueller's team marked a major escalation in a probe that has dogged the president since he took office in January.There was nothing in the court hearing that pointed to any evidence against Trump, and the White House said Flynn's guilty plea implicated him alone."Nothing about the guilty plea or the charge implicates anyone other than Mr. Flynn," said Ty Cobb, a White House attorney.Flynn, a retired army lieutenant general, only served as Trump's national security adviser for 24 days. He was forced to resign after he was found to have misled Vice President Mike Pence about his discussions with Kislyak.But Flynn had been an enthusiastic supporter of Trump's election campaign and the president continued to praise him even after he left the administration, saying Flynn had been treated "very, very unfairly" by the news media.A small group of protesters yelled "Lock him up!" as Flynn left the courthouse on Friday, echoing the "Lock her up!" chant that Flynn himself led against Trump's Democratic rival, Hillary Clinton, in vitriolic appearances on the campaign trail.SANCTIONSProsecutors said that Flynn and Kislyak last December discussed economic sanctions that Obama's administration had imposed on Moscow for allegedly interfering in the election.Flynn admitted later falsely telling FBI officials that he did not ask Kislyak to refrain from escalating a diplomatic dispute with Washington over the sanctions.Prosecutors said Flynn consulted with a senior member of Trump's presidential transition team about what to communicate to the Russian ambassador."Flynn called the Russian ambassador and requested that Russia not escalate the situation and only respond to the US sanctions in a reciprocal manner,” prosecutors said in court documents.It did not name the senior official in the Trump team but US media reports identified former adviser K.T. McFarland as the person. Reuters was unable to verify the reports.On December 28, 2016, the day before prosecutors say the call between the Trump aides took place, Trump had publicly played down the need to sanction Russia for allegedly hacking US Democratic operatives."I think we ought to get on with our lives. I think that computers have complicated lives very greatly," Trump told reporters at his Mar-a-Lago Florida resort.TESTIMONYRyan Goodman, a professor at New York University Law School, said Flynn’s plea deal shows Mueller is scrutinizing the truthfulness of testimony given to his investigators. Kushner is potentially liable for making false statements if his testimony is contradicted by Flynn, Goodman said.Earlier on Friday, ABC News cited a Flynn confidant as saying Flynn was ready to testify that Trump directed him to make contact with Russians before he became president, initially as a way to work together to fight the Islamic State group in Syria.Reuters could not immediately verify the ABC News report.US stocks, the dollar and Treasury yields fell sharply after the ABC report, although they partially rebounded on optimism that a Republican bill to cut taxes will be approved in the US Senate.If Trump directed Flynn to contact Russian officials, that might not necessarily amount to a crime. It would be a crime if it were proven that Trump directed Flynn to lie to the FBI.Moscow has denied what US intelligence agencies say was meddling in the election campaign to try to sway the vote in Trump's favor. Trump has called Mueller's probe a witch hunt.In May, the president fired FBI Director James Comey, who later accused Trump of trying to hinder his investigation into the Russia allegations. Comey also said he believed Trump had asked him to drop the FBI's probe into Flynn.Comey on Friday tweeted a cryptic message about justice."But let justice roll down like waters and righteousness like an ever-flowing stream, 'Amos 5:24’," he wrote, quoting the Biblical book of Amos.Paul Manafort, who ran Trump's presidential campaign for several months last year, was charged in October with conspiring to launder money, conspiracy against the United States and failing to register as a foreign agent of Ukraine’s former pro-Russian government.Manafort, who did not join Trump's administration, and a business associate who was charged with him both pleaded not guilty.