Massachusetts schools wrestle with an increase in antisemitism

So far in 2017, there have been 53 antisemitic incidents in Massachusetts K-12 schools, an increase of more than 60 percent over the 33 school-based incidents. 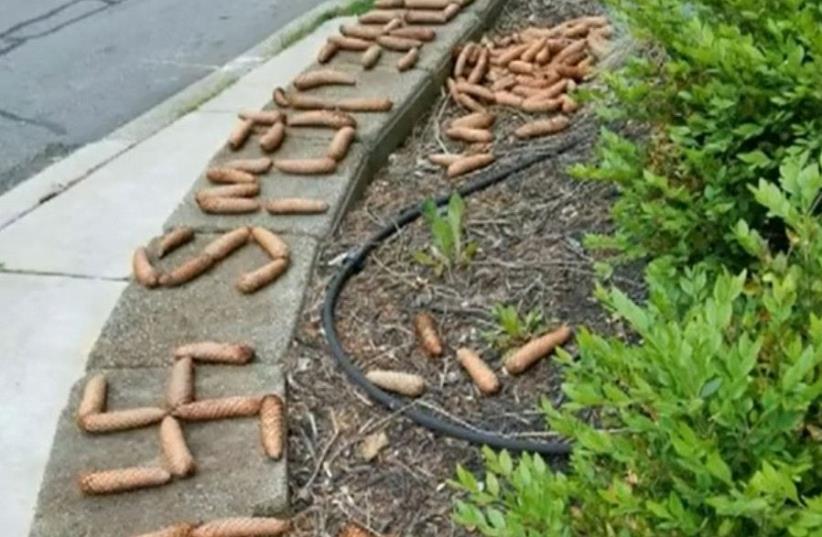 Pine cones spelling out antisemitic messages near Pittsburgh, US.
(photo credit: screenshot)
Advertisement
Farmington, Massachusets (TNS) — As schools across Massachusetts grapple with a recent surge in racist graffiti and antisemitic incidents, many educators say they're working to build programs into their curriculums to combat hate."We are trying to focus proactively on creating an inclusive culture and climate in a preventative way," said Sara Ahern, superintendent of schools in Franklin, where swastikas were scrawled on school buildings and playground equipment three times last year and again earlier this month.Antisemitic incidents, typically involving vandalism and harassment, have become significantly more common over the past year, both nationally and in Massachusetts, according to a recent audit released by the Anti-Defamation League. In New England, the ADL tracked 132 antisemitic incidents from January through September this year, 32 percent more than the same span in 2016. Incidents were reported in 58 Massachusetts cities and towns.So far in 2017, there have been 53 antisemitic incidents in Massachusetts K-12 schools, an increase of more than 60 percent over the 33 school-based incidents the ADL logged over the same period in 2016."It's more than troubling," said ADL New England Regional Director Robert Trestan. "I would characterize it as a warning sign. People think it's OK to use a spray paint can or Sharpie to disseminate a message of hate, and that it's OK to harass someone. There's a real concern of what happens after that... A real fear is violence is coming next. If you dehumanize people, that makes it in some ways acceptable for people to attack one another. The dramatic rise in incidents is a warning sign."For schools, an effective response should include directly addressing a specific incident when it occurs, Trestan said. In the long term, he said, proactively integrating an anti-hate program into the curriculum is essential.In Melrose, Massachusetts, school administrators reached out to the ADL this fall after a swastika and Nazi SS insignia were carved into a piece of playground equipment at an elementary school."The Melrose Public Schools is actively involved with the Anti-Defamation League, and we rely on the organization's guidance and resources when these types of incidents occur," Superintendent Cyndy Taymore said. "When we encounter a message of hatred or intolerance, we try to be true to our mission by building an educational component into the disciplinary process. Organizations like the ADP, the NAACP and Urban Improv have helped our school district approach the topic of hate speech from a variety of angles. We have also learned a great deal about how we need to approach these incidents as educators as well."School administrators notified the police of the incident and sent a letter home to parents, denouncing the incident and asking for their help in reinforcing the message that such acts are not acceptable."We emphasize, at all times, the importance of being respectful and accepting of all people as part of the same human community," Taymore said. "We believe educating our students is our best response to and prevention tool for incidents of hate and bias."In Franklin, Massachusetts, the school system is working with the ADL to integrate the "World of Difference" program into the curriculum. The program includes training sessions to help students become peer leaders. Once trained, the peer leaders will work to spread a message of tolerance to younger students.Trestan said research backs the peer leadership approach, but that adult role models are also important for students. Adult role models are particularly important, he said, as racists and anti-Semites have recently become emboldened and increasingly visible."Frankly, that was one of the troubling things with the president's response to Charlottesville," Trestan said.In August, US President Donald Trump was widely criticized for his response to a white supremacist rally in Charlottesville, Virginia, where a woman was killed after a demonstrator sped his car into a crowd of counter-protesters. Trump initially condemned "hatred, bigotry and violence on many sides — on many sides," rather than explicitly denouncing the white supremacists.The lack of respect people show for each other in online culture, as well as the amplification the Internet has given to hate groups' messages, is also a likely factor in the rising rates of antisemitism, Trestan said."It's contributing to a very divisive atmosphere where we're calling each other names, targeting people because of where they were born, what the color of their skin is, who they love and what they believe. That does not represent American values."On November 6, following the release of the ADL's audit, Governor Charlie Baker re-established the dormant Task Force on Hate Crimes in Massachusetts. The task force, initially launched in 1991, has been inactive for several years. Its members will advise the governor on issues related to hate crimes, deterrence, prevention and victim support."Our administration is committed to making Massachusetts a safe and welcoming place with zero-tolerance for hate or violence," Baker said in a statement. "We look forward to working with this diverse group of qualified members who represent different backgrounds and parts of our state to enhance our commitment to inclusive and tolerant communities."