"Bibi Netanyahu told me the wall works," Trump said in defense of his cross-border plan. 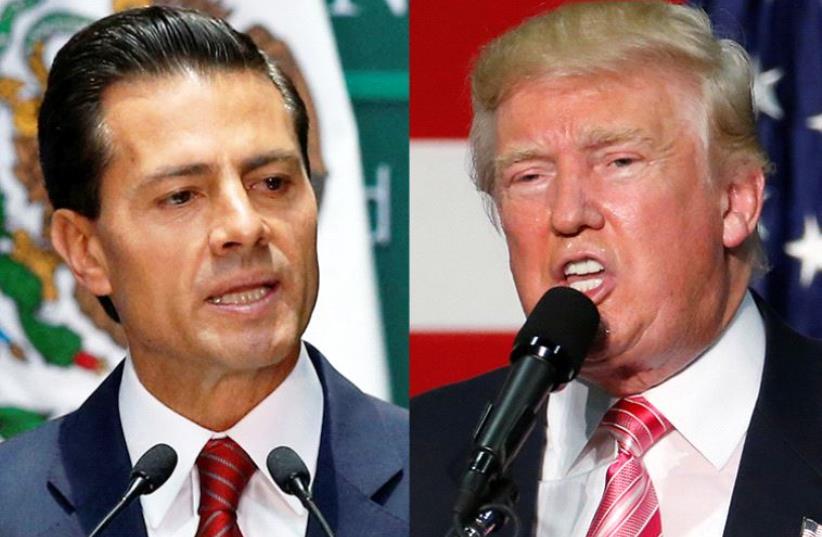 Enrique Pena Nieto and Donald Trump
(photo credit: REUTERS)
Advertisement
WASHINGTON -- In his first phone call with the president of Mexico after taking office, President Donald Trump said that Israel's security barrier with the Palestinians serves as a model for the wall he hopes to build on America's southern border.A transcript of that January call was released by The Washington Post on Thursday, revealing Trump as concerned by the optics of Mexican President Enrique Peña Nieto publicly rejecting his call for Mexico to pay for the project.During his campaign for president, Trump repeatedly referenced Israel's perimeter fence with the Palestinian territories as an example of a successful wall. But this time he said that Netanyahu assured him personally that Israel's wall has proven effective."You know, you look at Israel– Israel has a wall and everyone said do not build a wall, walls do not work— 99.9 percent of people trying to come across that wall cannot get across and more," Trump told Peña Nieto. "Bibi Netanyahu told me the wall works."Around the same time of the president's call with Pena Nieto, Netanyahu wrote on Twitter that he was supportive of the president's plan."President Trump is right," the prime minister tweeted. "I built a wall along Israel’s southern border. It stopped all illegal immigration. Great success. Great idea."