President Trump announced on Tuesday that he has nominated Neil Gorsuch to the Supreme Court. 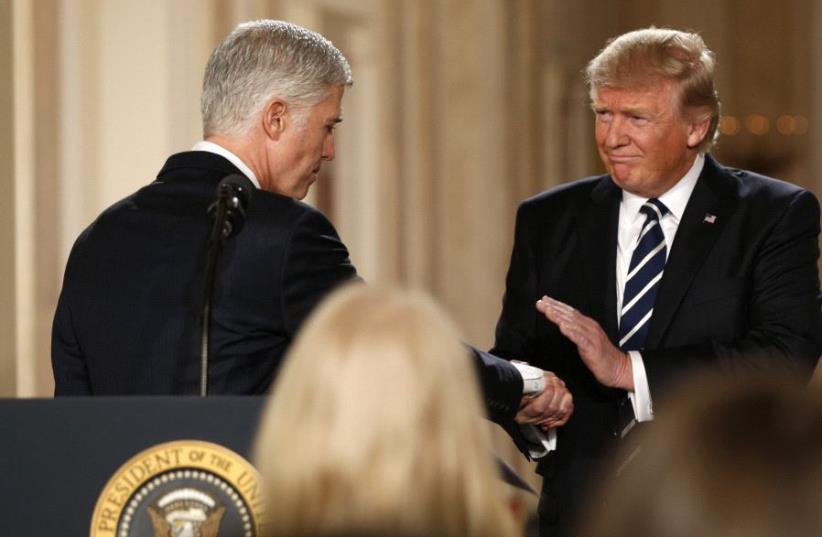 Donald Trump and Neil Gorsuch shake hands
(photo credit: REUTERS)
Advertisement
WASHINGTON – US President Donald Trump nominated Neil Gorsuch to the Supreme Court on Tuesday night, fulfilling his campaign promise to nominate a documented judicial conservative to the nation’s highest justiceship.Gorsuch currently serves as a judge on the US Court of Appeals for the Denver-based Tenth Circuit.If confirmed by the Senate, he will take the seat of the late Supreme Court justice Antonin Scalia, considered a lion of the law and a hero of the political Right.Scalia died over a year ago, leaving a vacancy on the nine-judge court.But Republican Senate leadership refused to entertain then-president Barack Obama’s choice for the seat, Merrick Garland, casting the vacancy as a choice for the American people to make through the selection of their next president.Trump campaigned on a promise to select his nominee for Scalia’s seat from a published list of known conservatives. Gorsuch, 49, was on that list.Gorsuch characterizes his judicial philosophy in similar terms as Scalia: He considers himself a “textualist” on statutes, and believes the US Constitution should be enforced as it was originally interpreted. He has weighed in in favor of “religious freedom” laws that have allowed for exceptions to and restrictions on reproductive rights, although he has not personally issued any rulings on abortion from the bench.As long as Justice Anthony Kennedy and four liberals remain on the bench, the court is not expected to pare back abortion rights, as many US conservatives fervently hope. The Supreme Court legalized abortion in the landmark 1973 Roe v. Wade ruling. In June, the justices ruled 5 to 3 to strike down a Texas law that restricted abortion access, with Kennedy and the liberals in the majority.But Trump may get to make additional appointments. Liberal Justice Ruth Bader Ginsburg, whom Trump called upon to resign last July after she called him “a faker,” is 83, while Kennedy is 80. Stephen Breyer, another liberal, is 78.Justiceships on the Supreme Court are lifetime appointments.Trump made his choice between two US appeals court judges, Gorsuch and Thomas Hardiman of the Philadelphia-based Third US Circuit Court of Appeals. The Senate confirmed Gorsuch for his current judgeship in 2006 by voice vote with no one voting against him.Democrats signaled it may not be easy this time.“Judge Gorsuch has repeatedly sided with corporations over working people, demonstrated a hostility toward women’s rights, and most troubling, hewed to an ideological approach to jurisprudence that makes me skeptical that he can be a strong, independent justice on the court,” said Chuck Schumer, Senate minority leader.Majority Leader Mitch McConnell said on Tuesday he hoped the Senate would show Gorsuch “fair consideration and respect the result of the recent election with an up-or-down vote on his nomination, just like the Senate treated the four first-term nominees of [Democratic] Presidents [Bill] Clinton and Obama.”Born in Colorado, Gorsuch attended Columbia University, Harvard Law School, and Oxford University for his doctorate. He clerked for both Supreme Court Justices Byron White and Anthony Kennedy before a short stint in private practice.Reuters contributed to this report.