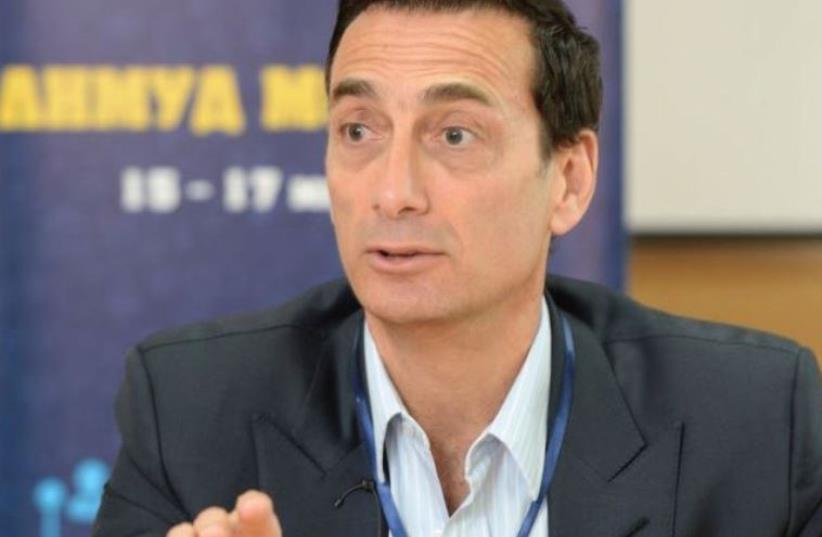 Bronfman speaks at a Limmud FSU conference last month in Kishinev, Moldova, where his grandfather fled Soviet pogroms in the 19th century
(photo credit: MARC ISRAEL SELLEM)
Advertisement
NEW YORK – “The relationship between the Diaspora and the State of Israel is being challenged by the policies of the government of Israel,” American businessman and prominent Jewish philanthropist Matthew Bronfman told The Jerusalem Post in a recent interview conducted in his Manhattan office.“Israel needs the Diaspora and the Diaspora needs Israel,” he said. “[The policies of the Israeli government] are not in sync with the views and the mentality of Diaspora Jews and I would hope that over the next couple of years, those two versions of Israel would come into sync a little bit more.”Bronfman said he believes the divide has intensified over the past five years and comes from issues such as increased settlement activity, statements from Prime Minister Netanyahu and issues of marriage and the control of the rabbinate over people’s ability to get married or divorced.Many in the American Jewish community have said they felt torn between Israel and the United States over the past year after Netanyahu spoke against the nuclear deal with Iran in Congress and after the deal was signed last summer, causing much tension between the Obama and Netanyahu administrations.According to a fall 2015 survey conducted by the American Jewish Committee, the main reason for the gap in attitudes toward the agreement is political party affiliation.According to the study, Jewish Democrats were far more likely to support it and Republicans far more likely to oppose it.“I think today if you ask most people, they have to honestly say that the promise of [President Barack] Obama that Iran’s behavior would change because we are going to welcome them back into the league of nations has not happened,” Bronfman said. “If you look at what’s happened in the last nine months, Iran’s actions have confirmed the fears that the prime minister expressed [in] Congress.”The subject of the Iran nuclear deal has been a major source of tension between Obama and Netanyahu. As the US is in the midst of the 2016 presidential campaign, Bronfman believes it is “impossible to predict” which of the five candidates will be the best president for Israel but said he “would not worry” about the front runners’ support for the Jewish state.“Both [Hillary Clinton and Donald Trump] will be fair supporters of the State of Israel,” he said. “Clinton has showed her unwavering support. Of course we have no record for Trump, no history to base it on, but when it comes to security, and to the bond between the nations, both candidates will be good for Israel.”Israel has been at the heart of the Bronfman family’s life for generations.Matthew Bronfman himself is one of the biggest investors in the Israeli economy. His uncle, Charles Bronfman, started the Birthright program with Jewish businessman Michael Steinhardt, and his father, Edgar Bronfman Sr., served as the president of the World Jewish Congress from 1981 to 2007. Edgar Bronfman, who died in December 2013, had played a key role in rescuing more than a million Jews from the former Soviet Union. Matthew, one of seven children, said that being the son of such an influential Jewish personality can sometimes make him feel he has big shoes to fill. He added, however, that he has made the decision to live up to his father’s legacy in his own way.As part of his Jewish philanthropic work, he serves today as the international chairman of Limmud FSU, an organization aiming to engage young Russian Jews.“I have decided to be very involved in world Jewish life, but to do it in a way that is comfortable for me, in the same way my father didn’t do what his father did,” he said. “The challenges are different, the opportunities are different and obviously the world is different so it’s not like we could replicate either what my father did or what my grandfather did or what my uncle Charles does today.”Limmud FSU held a tribute event for Edgar Bronfman Sr. at its conference in New Jersey at the beginning of March. The event was organized on the occasion of the launch of his last book, Why Be Jewish?, which was published posthumously and raises the issue of continuity and of the next generation of Jewish leaders.This next generation has been at the center of much debate in the Jewish community in past years.Young American Jews have shown a decreased involvement with the religion and with Israel, as demonstrated in the Pew Research Center’s 2013 study on American Jewry. But Bronfman believes this phenomenon is nothing new.“There will always be struggles of connection in the Diaspora,” he said.“I think my generation as well was less connected in a way than the generation before.” On the other hand, though, he said, “There is no question that there are still many young people who are connected emotionally to Israel.”Going back to his father’s last book, Bronfman said he is often asked what its message really is, since his father didn’t believe in God, but in “godliness.”“The message is that the next generation should go and learn Torah, they should study and it’s only through study that they are going to be able to make an educated decision as to how they want to express their Judaism, whether they believe in God or not.”To register for the Jerusalem Post Annual Conference: https://members.jpost.com/nyc2016.aspx