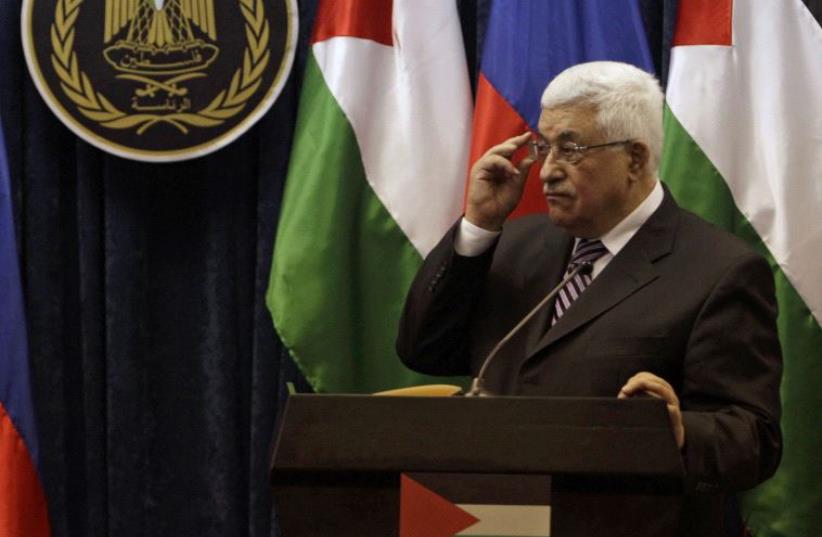 Palestinian Authority President Mahmoud Abbas
(photo credit: REUTERS)
Advertisement
Palestinian Authority President Mahmoud Abbas said Thursday evening that the announcement of Israeli Defense Minister Avigdor Liberman classifying the Palestinian National Fund as a terrorist organization was a basic violation of the Oslo Accords, which were signed by the PLO and Israel. Abbas said in a statement to official PA news outlet Wafa that the National Fund is one of the PLO’s institutions which performs its role in accordance with signed agreements and international standards of transparency and international oversight.Liberman on Thursday labeled the PNF a terrorist organization due to “its continuous and sustained support to entities responsible for serious terrorist activity against Israel.”According to a Defense Ministry statement, the fund is used, among other things, to act as a conduit for tens of millions of shekels to security prisoners detained for committing terrorist activities and their families.The money is transferred on a monthly basis and the longer the prison sentence, the more money the prisoner and his relatives receive, the statement read.In addition, the ministry said the fund supports the families of terrorists who were wounded or killed while committing attacks against Israelis.Abbas attacked this classification. "At a time when the American administration is trying to create a climate that contributes to making peace through discussions with all parties and the presence of President Trump’s envoy in the region, this announcement is an Israeli attempt to impede, destroy, and belittle the American efforts," he said. "We reject this decision completely and call on the Israeli government to backtrack on it immediately because it will blow up the agreement that defines [our] legal relationship with Israel," Abbas continued, calling on "all states of the world to react to the announcement in an effort to preserve the agreement the United States and the whole world supported."