Arab League chief: Moving US embassy to Jerusalem would be explosive

Arab League, Egypt underline backing for a two-state resolution to the Israeli-Palestinian conflict. 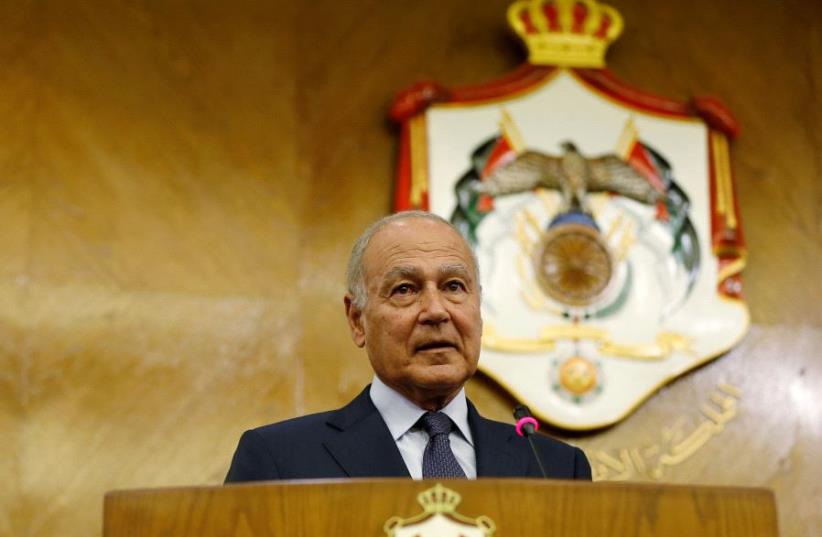 Secretary General of the Arab League Ahmed Aboul Gheit
(photo credit: REUTERS)
Advertisement
CAIRO - Arab League Secretary-General Ahmed Aboul Gheit said on Thursday that moving the US embassy to Jerusalem would be explosive for the situation in the Middle East, Egypt's state news MENA reported.Aboul Gheit also said that the Palestinian-Israeli conflict required a two-state solution, a day after the United States backed away from its commitment to Palestinian statehood."It requires a comprehensive and just settlement based on a two-state solution and the establishment of an independent Palestinian state on ... 1967 borders with its capital in Jerusalem," Egypt's state news agency quoted him as saying after meeting the UN chief Antonio Guterres in Cairo. Also on Thursday, an Egyptian Foreign Ministry spokesman told state news agency MENA that Cairo is also committed to a two-state solution.US President Donald Trump said on Wednesday that  he would support either a one-state or a two-state resolution when he met with Prime Minister Benjamin Netanyahu at the White House and pledged to make a deal to end the Israel- Palestinian conflict.“I’m looking at two states and one state. I am very happy with the one that both parties like. I thought for a while the two state might be easier to do, but honestly, if Bibi and the Palestinians, if Israel and the Palestinians are happy, then I am happy with the one they like the best,” Trump said. He is the first US president in at least two decades to refrain from pledging allegiance to the idea of a two-state paradigm and to open the door to the possibility of alternative ideas to achieve peace between Israeli and Palestinians, as well as in the wider region.Netanyahu, in turn, alluded to his continued support for a two-state resolution to the conflict, noting that his opinion on the matter had not changed in the eight years since he first spoke of two states for two peoples.Ahead of the meeting between Trump and Netanyahu, Guterres warned against abandoning the idea of a two-state solution to the Israeli-Palestinian conflict, saying there was "no alternative"."There is no alternative solution for the situation between the Palestinians and Israelis, other than the solution of establishing two states, and we should do all that can be done to maintain this," he said during a visit to Cairo.Michael Wilner and Tovah Lazaroff contributed to this report.