Second Friday of Ramadan passes without incident at al-Aksa Mosque 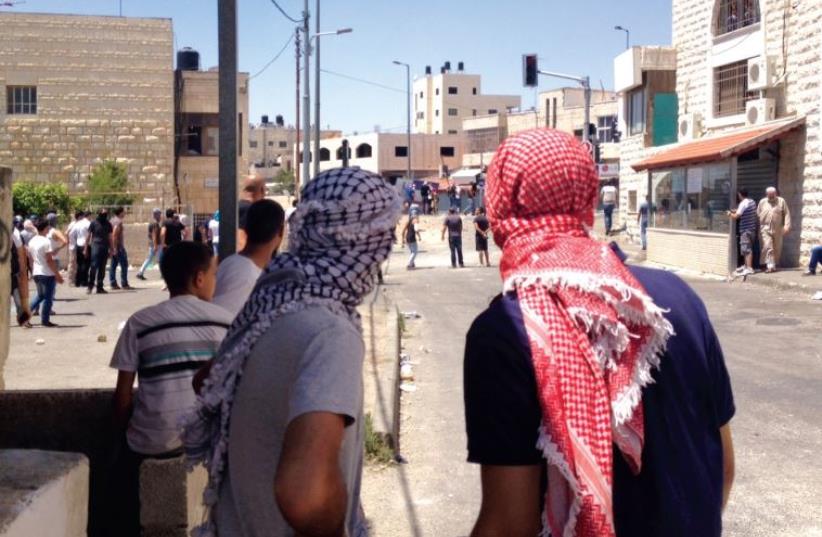 Rock-throwing in east Jerusalem in July 2014.
(photo credit: SETH J. FRANTZMAN)
Advertisement
A home in Jerusalem’s Armon Hanatziv neighborhood was struck by four firebombs Thursday night thrown by four Arab suspects from the West Bank who were illegally residing in the adjacent neighborhood of Jebl Mukaber.No one in the building on Meir Nakar Street was wounded during the attack, which resulted in damage to an exterior wall and garden, police said. All four suspects were apprehended by Border Police dispatched to the area, and remain in custody.“Police immediately set up roadblocks in the area for security measures and opened an investigation into how the suspects got into Jerusalem,” said police spokesman Micky Rosenfeld.Armon Hanatziv, also called East Talpiot, has been a flashpoint for violence since the wave of Palestinian terrorism began last October. Since then, residents of Jebl Mukaber have murdered four Jews.The latter neighborhood is a haven for Hamas sympathizers and operatives.Last week, Hamas operative Balal Abu Gaanam, 21, who resided in Jebl Mukaber, was convicted of murdering three Jewish men and wounding 10 others on an Egged bus where the neighborhoods intersect last October.Gaanam and his accomplice, who was shot dead by police, shot and stabbed to death Haim Haviv, 78, Alon Govberg, 51, and Richard Lakin, 76, during the October 13 rampage.One month earlier, Alexander Levlovitz, a 64-year-old grandfather, died hours after an Arab youth threw a rock from an overpass in Armon Hanatziv that shattered his vehicle’s windshield, causing him to crash.Levlovitz was driving home with his two daughters following a Rosh Hashana dinner.Rosenfeld added that no incidents of violence were reported during the second Friday prayers of Ramadan at al-Aksa Mosque, where more than 50,000 Palestinians from the West Bank were granted entry, as well as 300 from Gaza.Jerusalem District Police head Asst.-Ch. Yoram Halevi praised the thousands of officers who secured the Old City for their professionalism during the volatile gathering to “allow freedom of religious observance, while keeping the public safe and at peace.”Heightened security remains in effect throughout the capital, with an emphasis on the Old City, Rosenfeld said.