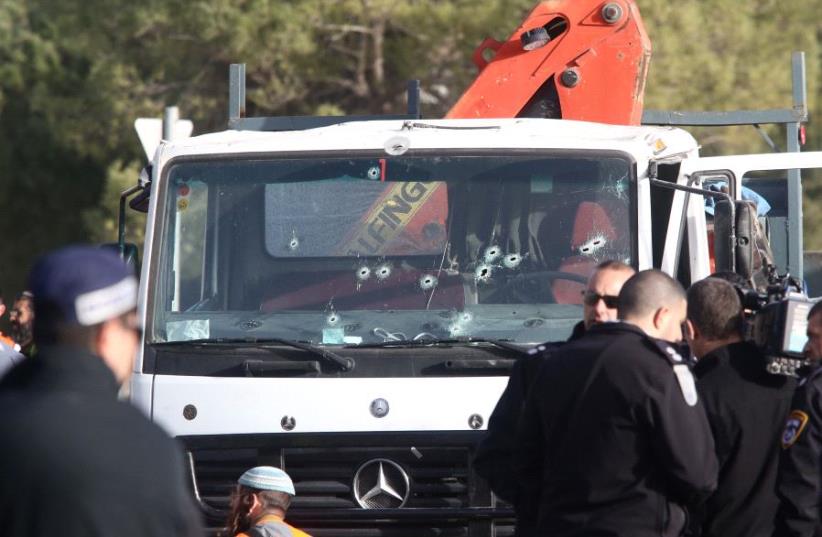 Scene of Jerusalem ramming attack
(photo credit: MARC ISRAEL SELLEM)
Advertisement
The High Court of Justice heard a petition on Monday to block the house demolition of the family of terrorist Fadi al-Qunbar.Qunbar killed three female soldiers – 20-year-old Lt.Yael Yekutiel of Givatayim, 22-year-old Lt. Shir Hajaj of Ma’aleh Adumim and 20-yearold Sec.-Lt. Shira Tzur of Haifa – one male soldier, 20-yearold Sec.-Lt. Erez Orbach of Alon Shvut, and wounded 17 others in Jerusalem’s Armon Hanatziv on January 8.He ran the victims over with his truck and started to maneuver the truck into reverse to attack more people, but was shot and killed by security forces in the area before he could do so.The victims’ families came out in force for the hearing, protesting that the legal system was trying to protect the terrorists’ families when their loved ones, who were murdered, had no protections.The state petitioned the High Court to allow them to seal off the family’s house instead of demolishing it. It explained that Qunbar’s family shares a joint wall with extended family members whom it did not seek to punish.Human rights NGO Hamoked argued against the demolition, saying there was no evidence that Qunbar’s wife and four children knew anything about his intentions.Hamoked regards all house demolitions as illegal, but its argument was that even under Israeli law, which allows for most state-requested demolitions, the state must show some evidence of knowledge of the attack by the family of a terrorist.Qunbar’s sister publicly endorsed his actions after the fact, but Hamoked argued that this was not proof of a connection to his wife and children, and that the endorsement did not prove she had knowledge of the attack beforehand regardless.It is unclear when the High Court will issue its ruling.Magen David Adom spokesman Elli Zenilman described the scene on January 8, saying, “When we arrived at the scene, we saw something that was horrifying – young adults lying on the street in the area of the attack.”MDA paramedic Landy Sharon said he saw a truck that hit a group of young people who got off a bus near the Armon Hanatziv observation post. “About 10 people were lying on the ground near the street,” he said.“Some of them were trapped under the truck.”ZAKA Jerusalem commander Bentzi Oering described the scene as reminiscent of a battlefield.Daniel K. Eisenbud contributed to this report.