“Israeli citizens are exposed to daily terrorism, incitement and disinformation on the part of the Palestinians,” says Justice Ministry director-general Emi Palmor. 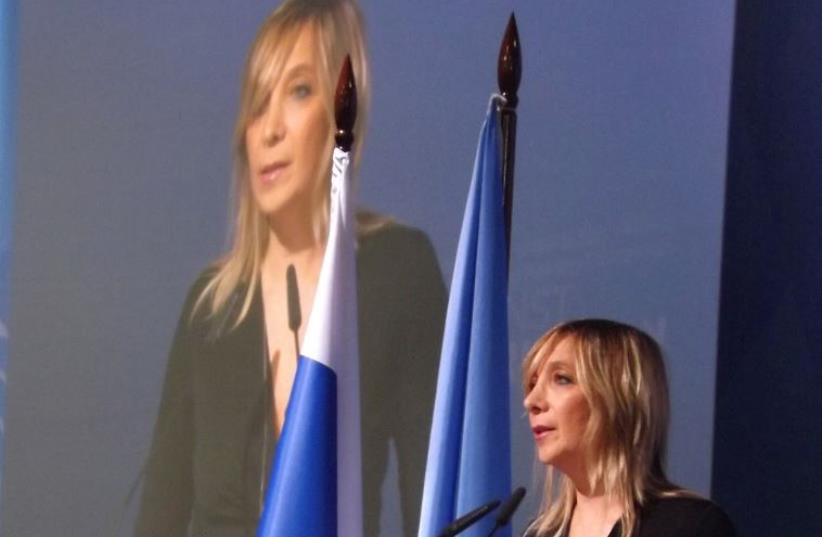 Emi Palmor, director-general of the Justice Ministry, addresses the Conference of the States Parties to the UN Convention against Corruption in St. Petersburg, Russia, yesterday
(photo credit: JUSTICE MINISTRY)
Advertisement
A confrontation between Israeli and Palestinian representatives erupted on Tuesday at the sixth session of the Conference of the States Parties to the UN Convention against Corruption, which is taking place in St. Petersburg, Russia.In his speech, the Palestinian representative pointed a finger at Israel regarding recent incidents in the region, citing alleged burning of children and violations of the sanctity of holy sites.Following the accusations, Israel’s representative, Ministry of Justice director-general Emi Palmor – whose speech was supposed to focus only on aspects of Israel’s involvement in the fight against corruption – began her address by stressing that “Israeli citizens are exposed to daily terrorism, incitement and disinformation on the part of the Palestinians.”“I ask you to look at me,” she told the participating states. “I arrived this morning from Jerusalem, and I am going back there tomorrow. Most of the stabbing incidents are occurring within walking distance from my office.“The next time you hear about an incident in Jerusalem, ask yourself if this time it was me, or any other employee of the ministry,” she added.According to the ministry, the representative of Kuwait, who was leading the discussion, stepped down from the stage during Palmor’s speech and returned only after she finished speaking.The UN Convention against Corruption, adopted in 2003, is the only legally binding universal anti-corruption instrument. It currently includes 177 States Parties and covers five main areas: prevention, criminalization and law enforcement measures, international cooperation, asset recovery, and technical assistance and information exchange.The Conference of the States Parties is held every two years. This year’s event, considered the world’s largest anti-corruption forum, was the first one in which high-level Israeli delegates participated.Emi Palmor stressed the importance of Israel taking an active part in the international community’s fight against corruption. According to her, succeeding in the war against corruption largely depends on fruitful cooperation between government authorities, civil society organizations and the business sector.UN Secretary-General Ban Ki-moon, who was present at the start of the conference on Monday, stated that ending corruption is crucial to achieving sustainable development, which the 70th UN General assembly made a top priority when it adopted the 2030 Agenda for Sustainable Development at the end of September.“The world counts on you to take bold decisions and act decisively to strengthen the global fight against corruption and bribery,” Ban told the participants. “The 17 Sustainable Development Goals contain the promise of a better collective future for people and planet, and they address the potential challenges that can impede our progress.“Our ultimate goal must be to turn hands thrust out in hope of payment into hands joined together against this pernicious crime,” he said. “Let us forcefully convey the message that when bribes are paid, everyone counts the cost.”The conference will continue until November 6. Over 30 events about how to best tackle corruption will be held on the margins of the forum.