Israeli lawyer sentenced to 7.5 years in jail for smuggling for Hamas 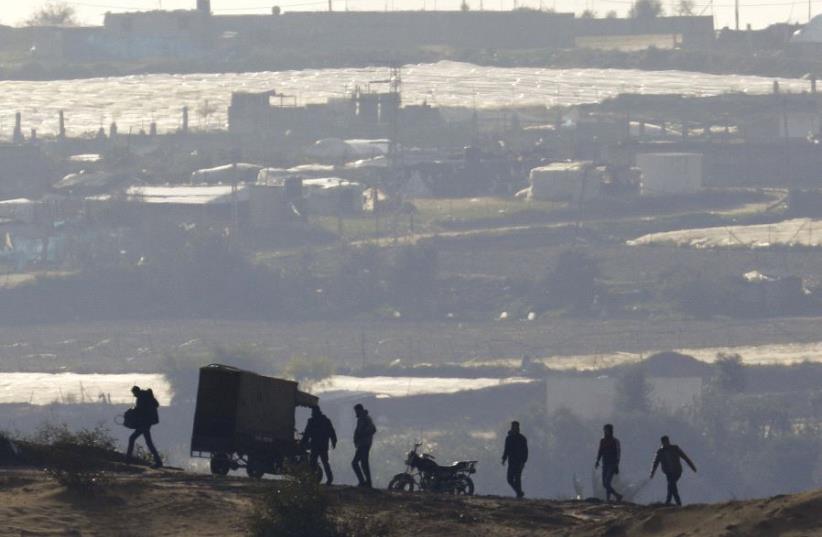 PALESTINIANS WALK near the Israel-Gaza border inside Gaza, where Hamas still holds Israeli citizens.
(photo credit: REUTERS)
Advertisement
The Haifa District Court on Thursday sentenced an Israeli-Arab attorney to seven-and-a-half years in jail for using his privileged lawyer-status to smuggle illegal items and information to Palestinian security prisoners.The court also fined the lawyer, Muhammad Aabad, NIS 50,000 ($12,500)  and ordered more than NIS 1,131,000 ($260,000). of his funds seized.This came after the court’s January conviction of Aabad who was also found guilty of terror financing, money-laundering and various forms of fraud to the amount of NIS 1,411,600 ($3.2 million).The court found that he delivered messages between Hamas officials in the Gaza Strip and Hamas security prisoners and between the prisoners themselves.Between May 3, 2012, and February 24, 2014, Aabad served as a conduit between Hamas officials and 18 different prisoners.Some of the communications revealed that Aabad was a carrier of important information between Hamas political leader Khaled Mashaal in Qatar and terror mastermind Salah Aruri, in Turkey.Aabad also maintained illegal communications with Hamas security prisoners Abbas al-Suade, sentenced to 35 life terms, and Abdallah Barghouti, sentenced to 67 life terms, both for major acts of terrorism.He worked with lawyers Firas Maskem and Mahmoud Rajoub as well as with Gaza Hamas operative Firas Fidi, who had been sentenced to multiple life terms for terrorism, but was freed in the 2011 Gilad Schalit prisoner exchange.The court wrote that Aabad was not remotely deterred by the fact that his actions seriously endangered Israeli citizens and were vital to Hamas’s operations and ongoing communications with its operatives in Israeli prisons.Aabad’s lawyer asked for a jail sentence of only six months to four years, noting that Aabad was a first-time offender who passively passed messages on and did not initiate contacts with top Hamas figures such as Aruri.The court, however, doled out a stiff sentence so that his punishment “might really deter many others” from committing similar acts.