Netanyahu looks to coordinate settlement bill’s passage with US 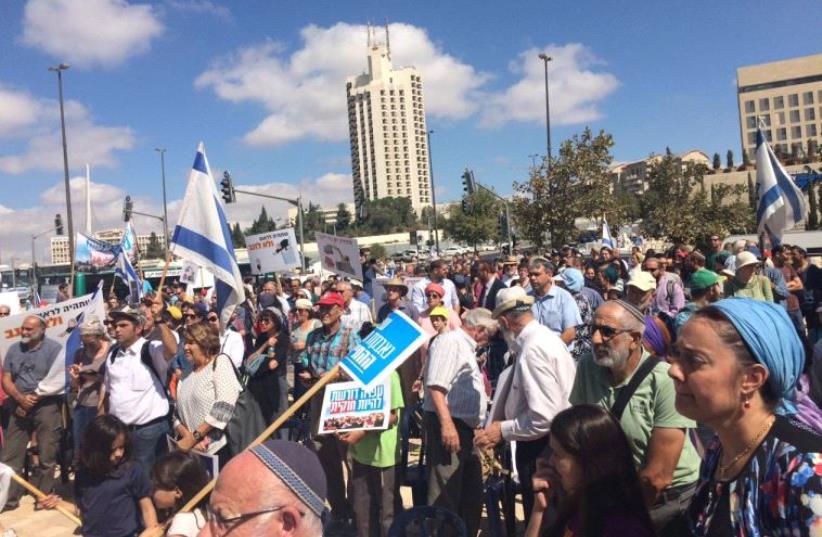 Protesters demanded that the government halt the pending demolition of nine stone homes in the Ofra settlement and 40 modular ones in the Amona outpost
(photo credit: TOVAH LAZAROFF)
Advertisement
Prime Minister Benjamin Netanyahu is seeking to coordinate passage of the settlement regulation bill with the US as right-wing lawmakers prepare for a Knesset vote late on Monday night that would approve the legislation.Bayit Yehudi leaders have threatened to topple the government if Netanyahu torpedoes the legislation.Thousands rallied in the Ofra settlement on Sunday afternoon in support of the legislation, which would retroactively legalize almost 4,000 homes on private Palestinian property.Before flying to the United Kingdom for his first meeting with British Prime Minister Theresa May, Netanyahu assured reporters that his position on the bill had nothing to do with pressure from Bayit Yehudi.“I am busy running the country, and when I run the country I think about the whole set of national interests and act only according to that,” he said.Without mentioning his rival right-wing party’s name, Netanyahu dismissed claims that he was under political pressure or that such a threat from Bayit Yehudi even existed.“I am constantly hearing fake ultimatums. I am not bothered by this,” he said. “There are people who are busy with empty briefings to the media and on social networks.”Netanyahu is due back in Israel on Monday night and the vote on the bill is expected to be held after his arrival.Earlier in the day, Netanyahu told Likud ministers that the bill would be brought to a vote Monday but that he wanted to discuss with Ambassador to Washington Ron Dermer the possibility of coordinating with the US administration its timing.Supporters of the legislation worry that Netanyahu’s desire to coordinate with the US could become an excuse to delay the vote as a first step toward eventually dropping the bill all together.The Zionist Union, which opposes the legislation, accused Netanyahu of using Trump as an excuse to bury the bill.“Take responsibility and remove the bill from consideration instead of hiding behind Trump’s back,” the party said.Bayit Yehudi said the bill was “50 years late,” adding that it offers residents of Judea and Samaria a “normalized life.”“We are certain that all coalition members will do their best to support this,” the party added.Coalition chairman David Bitan (Likud) told the media Netanyahu had instructed him to bring the measure for a vote.Senior government officials have spoken a great deal over the last few weeks about not surprising US President Donald Trump and his new administration.Last week, Trump warned Israel against taking unilateral steps when it came to West Bank settlements, even though he also has sent Israel encouraging messages about Judea and Samaria. This includes a statement that the White House does not view the settlements as a stumbling block to peace with the Palestinians.Left-wing lawmakers and judicial experts have warned that the bill could sway the International Criminal Court to rule on the issue of West Bank settlements, a move it is already studying.Right-wing legal experts have argued that the law actually places Israel within compliance of international law because it compensates the Palestinians for the land loss as opposed to the current situation in which settlers are using the property without any remuneration to the Palestinians.Attorney-General Avichai Mandelblit has said the legislation is unconstitutional and would not withstand the petitions that would be filed against it before Israel’s High Court of Justice.Retired Supreme Court president Dorit Beinisch told Israel Radio on Sunday the measure was problematic because the Knesset did not have the authority to legislate issues relating to property of Area C of the West Bank, which was outside its purview.“We [the Knesset] do not have the constitutional ability to legislate for this area,” she said, adding that it also was against international law because it violated Palestinian property rights.Lawmakers are moving forward with the legislation based on the legal opinion of the Knesset’s attorney and with the help of a private lawyer.Left-wing legislators have accused Netanyahu of bringing the bill to a vote just to appease his political supporters, knowing full well that the High Court will strike it down.“Netanyahu is acting as if he is a leaf that can be blown here and there by right-wing thugs,” said MK Amir Peretz (Zionist Union). “The government is bringing this bill forward even though it knows it is illegal and that it will be overturned by the High Court of Justice.”MK Tzipi Livni (Zionist Union) said: “Netanyahu knows the truth. And the truth is that this legislation harms Israel and its citizens.”She added that it would be bad for Israel’s security and would harm its ability to push forward with maintaining the settlement blocs.This has nothing to do with Trump and “there is no reason to approve” the bill, she said.The push to authorize the bill in a second and third reading comes in the wake of last week’s demolition of the Amona outpost and the pending demolition next month of nine homes in the Ofra settlement.Both Likud and Bayit Yehudi are under fire from settlers because of the demolitions, which were ordered by the High Court.The bill would prevent such High Court rulings in the future.Settlers in Ofra heckled both Bayit Yehudi chairman Naftali Bennett and Justice Minister Ayelet Shaked, also from Bayit Yehudi, who came there late Saturday night to hold a meeting with its secretariat.“You should be ashamed of yourself,” the settlers shouted at them. “You caved in to Bibi.”