Violence is a repeat of clashes that have erupted intermittently at the holy site over the course of the past few weeks. 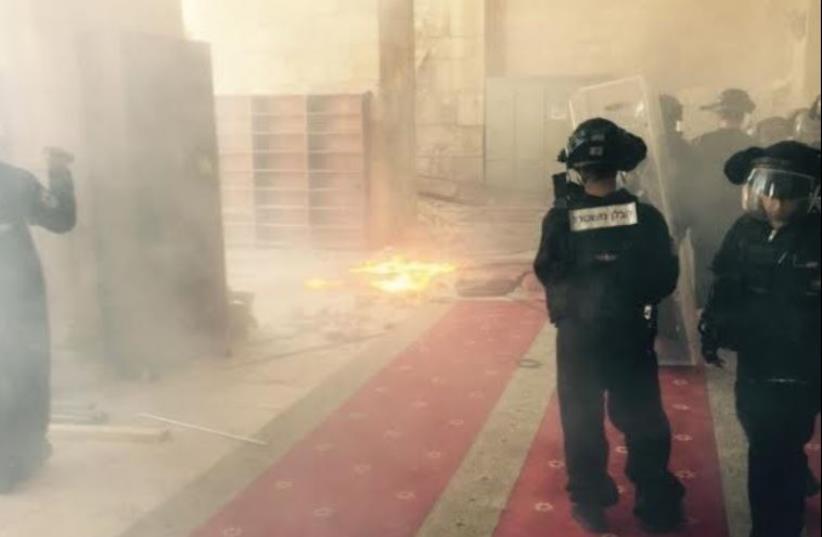 Police enter Temple Mount complex after being pelted with stones and firebombs
(photo credit: ISRAEL POLICE)
Advertisement
Rioting continued for a second day on the Temple Mount on Monday, following violence at the holy site during the Muslim Id al-Adha festival a day earlier.After dozens of masked youths rioted on Sunday morning, when Jewish visitation to the Temple Mount was temporarily barred, police spokesman Micky Rosenfeld said age limits were reimposed on Monday morning.“Local Israeli Arabs took advantage that there was no age restrictions for the Muslim holiday, and Monday’s age limits were based on concrete information that we received on the strong possibility of violence on Monday morning,” Rosenfeld said.However, shortly after learning of the ban planned for Monday on entry of Muslim men under the age of 50, dozens of Arab youths camped out in al-Aksa Mosque on Sunday night, where they stockpiled firebombs, rocks and fireworks, Rosenfeld said.“As soon as local Arabs learned of the age restrictions, dozens of youths barricaded themselves in the mosque to prepare for a full-scale riot on the first day of the Jewish festival [of Succot],” he said.“When the police force, under the command of the District Commander Asst.- Ch. “Chico” Adri, entered the Temple Mount at around 6:45 a.m., masked Arabs threw Molotov cocktails, rocks, firecrackers and metal pipes at them and then fled into the mosque.”Despite police attempts to defuse the situation through lengthy talks with leaders from the Wakf Islamic religious trust, which oversees the holy site, Rosenfeld said the violence continued unabated.“After exhausting all attempts to solve the conflict through dialogue and cooperation to restore peace – including through dialogue up with the management of the Wakf – police had no choice but to initiate moves to stop the dangerous attacks that jeopardized their lives,” he said.Still, after they barricaded themselves in the mosque, dozens of youths continued to throw firebombs at police, causing a small fire at its entrance, which officers extinguished, Rosenfeld said.“The rioters cynically used the mosque as a battleground and caused destruction to it before police restored order and allowed over 700 non-Muslim visitors to enter the compound,” he said, adding that no officers were wounded, and no arrests were made.The visitors toured the site without further incidents, Rosenfeld added.“The Jerusalem police made extraordinary efforts to allow worshipers of all faiths to visit safely and freely,” he said. “The actions of Muslim rioters on the Temple Mount today involving Molotov cocktails and other hazardous means... is a desecration of a holy place.”Moreover, Rosenfeld said that violence planned to disrupt a Jewish holiday will not be tolerated.“The fact that this happened during the chag [holiday] by extremists from the Israeli-Arab population is unacceptable and something police are going to assess to prevent from happening again,” he said.“Our units will crack down more intensively on these extremists and their attempts to plan riots on the Temple Mount.”Following Sunday’s rioting, Ofir Gendelman, a spokesman for Prime Minister Benjamin Netanyahu, clarified that no Jewish visitors had been allowed onto the compound when the violence occurred.“The Temple Mount was closed today to Jewish visitors for the last day of Id al-Adha, but Palestinian rioters still started clashes,” Gendelman wrote in a tweet.“Palestinian rioters who couldn’t find Jewish visitors to attack on the Temple Mount started throwing rocks and firecrackers at the Mugrabi Gate. Israel upholds the status quo on the Temple Mount. Those who violate it are Palestinian rioters who smuggle pipe bombs and firecrackers into it.”Gendelman added that Israel would not allow Palestinian rioters to smuggle weapons onto the Temple Mount.No other violence was reported in Jerusalem during the joint holidays, Rosenfeld said. 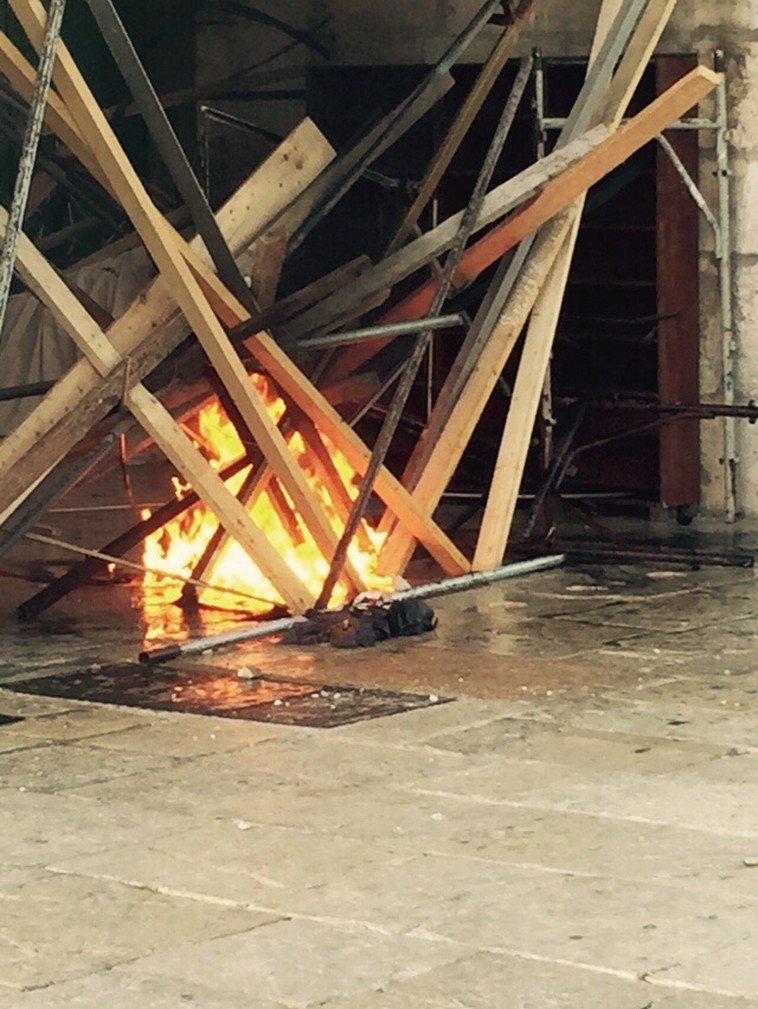 (A view of the wooden barricades erected by Palestinian rioters at Temple Mount on Monday morning, according to Israel Police.) (Photo credit: Israel Police) Joint List MK Hanin Zoabi accused Israel of trying unsuccessfully to “capture the Al-Aksa Mosque.” She said Israel had violated agreements that guarantee the independence of the mosques.Zoabi said Israel’s limiting the entrance to the Mount to Muslim men above 40 was chutzpah, saying that the Mosque was not a closed military zone.“Under the bullying occupation army, hundreds of extremist settlers are encouraged to enter and are defended,” Zoabi said. “Israel must understand that it cannot enter the site without facing resistance.”The Palestinian Ambassador to the UN in Geneva, Ibrahim Khraishi, said on Monday that he condemned Israeli violence on the Temple Mount, as he addressed the 30th session of the UN Human Rights Council. There have been Palestinian casualties in these attacks, in which the police have used tear gas and rubber bullets, Khraishi said.

Gil Hoffman and Tovah Lazaroff contributed to this report.