Jordan's foreign minister has reportedly invited Israel's ambassador to the kingdom to provide details on the events of Friday's attempted stabbing attack in Jerusalem. 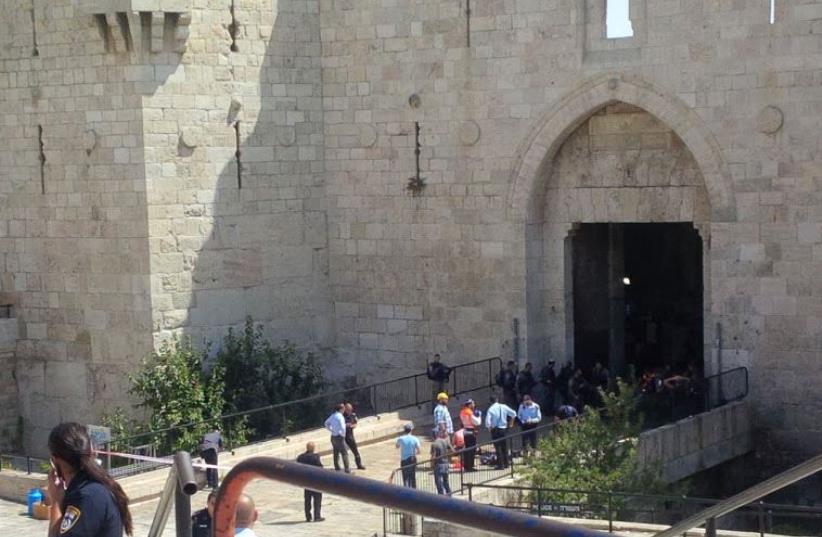 Terrorist attack at Damascus gate
(photo credit: MEDABRIM TIKSHORET)
Advertisement
Jordan’s Foreign Ministry on Monday summoned Israel’s ambassador Einat Shlein to provide details of Friday’s incident in Jerusalem in which a Jordanian citizen, Said Amro, was killed as he tried to stab two Border Police officers at Damascus Gate.According to an Israeli Foreign Ministry spokesman, there have been intensive contacts between Israel’s Foreign Ministry and all the relevant authorities in Jordan about the matter. The ministry said Shlein was called in within the framework of continuing the discussions about the incident, and updating the Jordanians on the details.While the Foreign Ministry had no other comment on the issue, Minister-without-Portfolio Tzachi Hanegbi told Israel Radio that it will be easy to explain to the Jordanians what happened.“Obviously the policemen at Damascus Gate did not know who the person was who ran at them with two knives,” he said. “The Jordanians are apparently doing what has to be done in cases like this, trying to get facts about the incident. This incident was filmed, so I think it will be easy to understand that this was not plotting against a Jordanian citizen in any way, but rather neutralizing a terrorist before he attacked Israelis.”
Jordanian terrorist at Damascus Gate (Sept. 16)
Nevertheless, emotions over the issue were running high in Jordan over the incident, where it was the lead story in some of the media outlets and variously termed a “crime” and a “deliberate killing.”Jordan’s official news agency Petra said “the government is closely following the details of the crime of the killing of the Jordanian martyr.”Petra said acting Foreign Minister Mohammad Momani had asked the Israeli ambassador to provide “all details, information and ongoing investigations” of the incident. It added that Momani had told the ambassador that the government wanted to have all the details of the killing “in order to take appropriate action.” Momani “reiterated that the deliberate killing of Amro by Israeli soldiers has the prime focus of attention of all in the kingdom,” Petra reported. He added that Jordan is committed to protecting and defending its citizens wherever they are.The incident comes on the eve of Tuesday’s parliamentary elections in Jordan in which the Muslim Brotherhood, which calls for the abrogation of the peace treaty with Israel, is trying to make a comeback as a viable opposition force. There is some speculation in Jerusalem that the regime is taking a high-profile stand on this issue before the elections partly because of the passions it has aroused in the Jordanian public.The incident has resonated because Amro is seen in Jordan as having been killed without cause. Jordanians identify strongly with a fellow citizen and, to add to the sensitivity, the incident took place in Jerusalem, where, according to the Jordanian account, Amro was on his way to prayers at al-Aksa Mosque, Islam’s third holiest site.Amro was buried during an angry funeral in the southern province of Kerak on Sunday. Wrapped in a white sheet, he was borne on a stretcher from the local mosque to a cemetery amid chants of “with blood and spirit we will redeem the martyr” and “there is no God but God and the martyr is the beloved of God” according to the Arabic language Facebook page of the Amman-based pro-government al-Rai newspaper.The Amro clan said it “holds the Zionist entity responsible for what happened to the martyr, who was visiting Jerusalem to pray at blessed al-Aksa Mosque and entered occupied Palestine legally and wasn’t affiliated with any political party.”The statement, which was also reported on the Facebook page, said Amro “wasn’t extremist and his only desire was to visit al-Aksa and pray in it.”The clan said the government should “follow the investigation through to its results, which will clarify the facts and guarantee the rights of the martyr.”