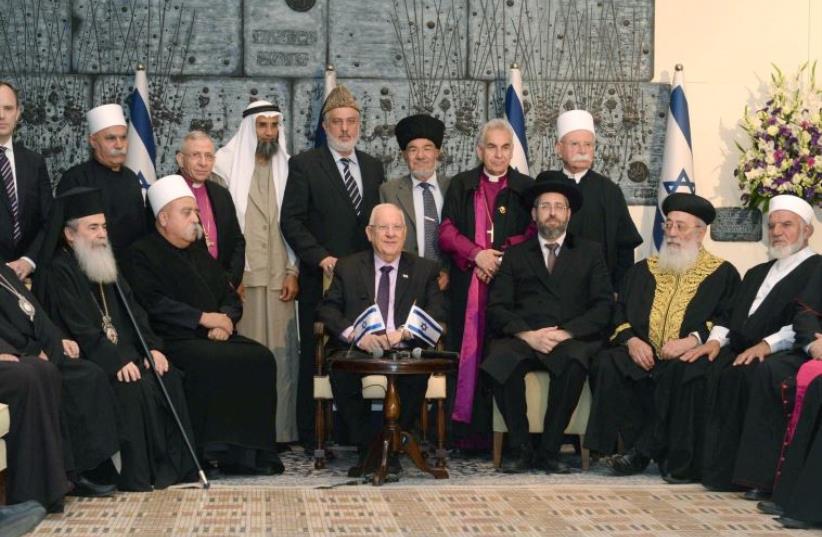 President Reuven Rivlin hosts religious leaders at his residence
(photo credit: Mark Neiman/GPO)
Advertisement
Religious leaders from across the spectrum of Israel’s faith mosaic joined President Reuven Rivlin on Wednesday in condemning violence, terrorism and incitement and in advocating fraternity, harmony and peace.The initiative for bringing leaders of the Council of the Faith Communities to the President’s Residence was that of Oded Wiener, the director-general of the offices of the Chief Rabbinate, who said that such a meeting was necessary in the present climate of violence and terrorism.Rivlin has spoken out many times and from many platforms on the need to prevent violence, terrorism and incitement, and the spiritual leaders came to endorse his sentiments and to add strength to his protests and declarations.Speakers included Sephardi Chief Rabbi of Jerusalem Shlomo Amar, Druse spiritual leader Sheikh Muwaffak Tariff, Greek Patriarch of Jerusalem Theophilos III, chairman of the Council of Muslim Religious Leaders Sheikh Mohammed Kaiyuan Abu Ali and Ashkenazi Chief Rabbi David Lau.There were 15 other religious representatives, including Dr. Joshua Lincoln, the secretary-general of the Baha’i International Community, who were not among the speakers.Amar underscored the cordial relations that are maintained between members of the council even during times of war and hostility.“This has enhanced our understanding of each other’s faith,” he said, adding: “Even when we cannot agree on how to solve problems, we do not allow such disagreements to disrupt our friendship, and we continue to contribute religious practice, wisdom and understanding with the aim of creating calm and persuading people in our respective communities to respect each other because we are all the children of the one God.”Amar asked the Almighty to give them all the ability to place intelligence ahead of emotion.Tariff said that there was nothing more symbolic of peace and unity than for spiritual leaders of all faiths to come together in Jerusalem in fraternity, peace and tolerance.To the outsider, this may look like any ordinary meeting, he said, “but we live in an era of uncertainty.There is terror in Europe and the Middle East and a civil war in Syria. All religious people must honor other human beings without religious or ethnic bias.”Tariff further declared: “There is no such thing as violence in the name of religion.” Religion is not a vehicle for violence, he insisted, but a vehicle for love and peace.Theophilos was grateful for the opportunity afforded the members of the council to join their voices “in condemning violence and terror wherever it takes place. Wherever people suffer violence, the bright light of hope dims,” he said.Turning to the use of free will, Theophilos lamented the extent to which it is misused. “Misuse of free will is arrogance,” he said, “because it blinds us to everything and everyone around us and makes us treat others for the purpose of meeting our own ends. From this, violence and terror are born.”Theophilos praised Rivlin for his defense of all the people in Israel.“We came here in the name of peace and to prevent violence in society,” said Kaiyuan. “Whoever loves God must love his fellow human beings.”Remarking that the religious leaders have no quarrel among themselves, he regretted that the same could not be said for other members of their respective faiths.“Religion states that one must not kill the innocent,” he declared, adding that Muslim imams are calling for peace and putting out their hands in friendship and cooperation.As an example, he cited Muslim contributions to organ transplants, saying, “We don’t ask to whom they’re going. All we care about is saving lives.”Rivlin emphasized the importance of the combined voices at the meeting, which he said was not ceremonial but one that is dealing with blood that has already been shed, and which may be shed.Terming the current situation as one of genuine crisis, Rivlin said that it is incumbent on everyone to try to avert outbreaks of violence that threaten the innocent.He warned that any form of incitement could ignite the whole region.Although the meeting was conducted in an atmosphere of calm, without raised voices, Rivlin cautioned his guests against deluding themselves that all is well.“This place, our home, is overwhelmed by the flames of incitement, some of which emanate from statements by noted religious leaders who claim to speak in the name of religious truth,” he said.Rivlin reiterated Israel’s freedom of worship and access to the holy sites of all faiths and asked his guests to make this clear to the world.Israel is fully committed to the strict preservation of the status quo, including that on the Temple Mount, he asserted.It is easy to turn Jerusalem into a place of conflict, said the president, but it behooves all those who love Jerusalem and believe in its holiness to do their utmost to prevent a religious war in the holy city.Yaakov Salameh, the head of the Interior Ministry’s Department of Religious Communities, read out a joint declaration in Hebrew and Arabic whereby all those present affirmed their commitment to the sanctity of life and denounced all forms of physical or verbal violence against the innocent, in particular when such acts were committed in the name of religion.The declaration also confirmed support for Rivlin in all his endeavors for the unity of all the people of Israel.