The IDF said it was looking into the incident. 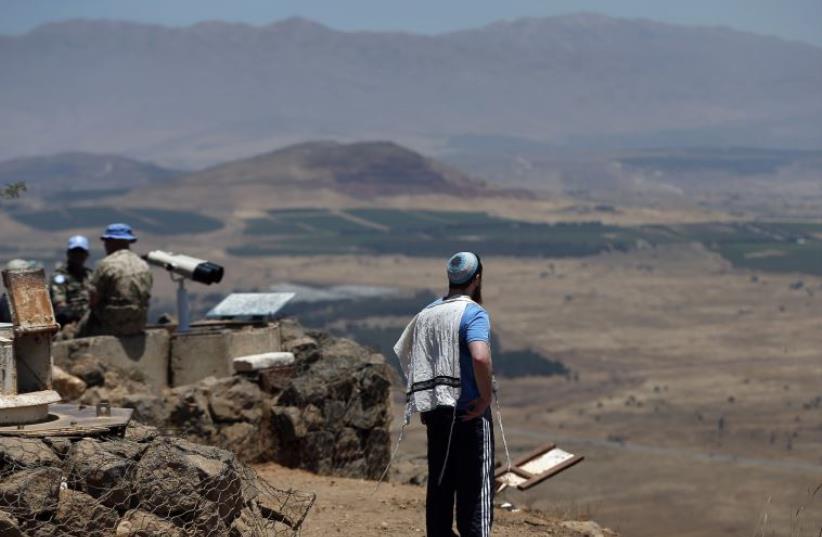 A Jewish man observes Syria from an Israeli army post guarded by UN peacekeepers (L) on Mount Bental in the Golan Heights
(photo credit: THOMAS COEX / AFP)
Advertisement
Rocket alert sirens sounded on Monday morning in northern Israel's Golan Heights and Jordan Valley regions. Shortly thereafter, the sirens were deemed to have been activated in a false alarm. The IDF said it was looking into the incident. In April, the IDF struck positions in Syria after projectiles struck the Golan Heights in an apparent incident of errant fire from fighting in Syria.According to the IDF, two rockets landed in open territory and caused no damage or injuries but red-alert missile sirens were activated in several communities on the Golan.“[The IDF] will not tolerate any attempt to harm the State of Israel’s sovereignty and the security of its residents, and holds the Syrian regime responsible for anything that occurs on its territory,” the IDF Spokesperson’s Unit said.Tensions along the northern border further raised after reports emerged on April 27 claiming that Israel had struck a Hezbollah arms hub near the airport in Damascus. Israel has reiterated its view several times that any transfer of advanced weaponry to the Lebanese Shi’ite terrorist group is a redline and that it will work to prevent any such movement.While the IDF neither confirmed nor denied the strikes, in a rare admission a senior officer said that in March Israel destroyed some 100 Syrian missiles, many of which were due to be delivered to Hezbollah.The border with Syria has been tense since civil war erupted in 2011. While Israel rarely publicly admits to carrying out strikes in Syria, which are mostly limited to convoys of advanced weaponry destined for Hezbollah, it is suspected of carrying out occasional retaliatory attacks after stray rockets or mortar rounds have hit Israeli territory.Anna Ahronheim contributed to this report.