The east Jerusalem resident who ran over two Israelis at a bus stop along Route 1 on last year's Holocaust Memorial Day was sentenced to life in jail plus 20 years. 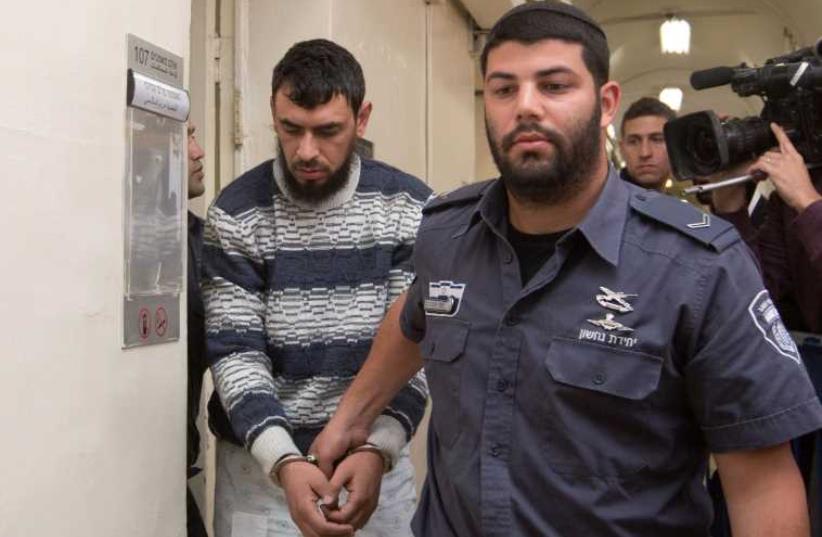 Khaleed Kutina arrives in court April 16, 2016
(photo credit: MARC ISRAEL SELLEM/THE JERUSALEM POST)
Advertisement
A Jerusalem district court announced on Monday the verdict of Khaled Koutineh, an east Jerusalem resident who was indicted in April 2016 of murder and attempted murder felonies, both of which he carried out on the eve of Israeli Holocaust Memorial Day on April 15, 2015. Koutineh was sentenced to life in prison for murder and as well as an additional 20 years behind bars for attempted murder. He was also charged with paying a fine of 516,000 NIS. The monetary compensation will go to the parents of victim who was killed and to a second victim who was wounded in the attack.  Koutineh ran over the two Israeli pedestrians who were standing at a bus stop on the Bar-Lev Boulevard in Jerusalem (Route 1) in what was later classified as a terror attack spurred by the perpetrator's ideological and nationalistic motives. One of the pedestrians, Shalom Yohai Sharki, was gravely injured and later died of his wounds. The other victim also sustained grave injuries and was hospitalized, but survived the attack and has recovered since. Authorities said last year that Koutineh was driving along Route 1, searching for Jews on the side of the road to run over. Eventually, he came upon a junction in French Hill and targeted the bus stop. "I sought to kill Jews," Koutineh was quoted as confessing to authorities.