Trump appears ready to make significant asks of Netanyahu – and they will be public, bold and reflective of Trump’s ambitious goal to seal the deal of all deals. 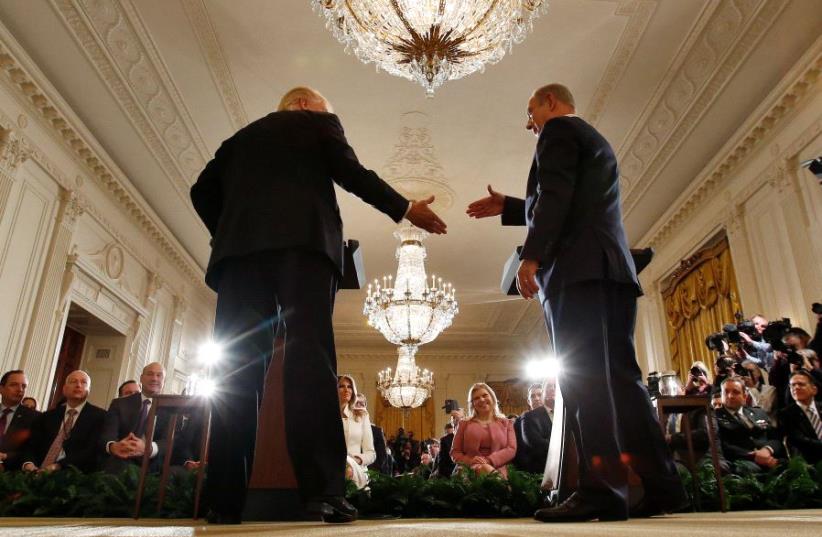 Benjamin Netanyahu shakes hands with Donald Trump (L) during a news conference at the White House in Washington , US on Feb. 15, 2017
(photo credit: REUTERS)
Advertisement
WASHINGTON – One week ago, White House officials floated to The Jerusalem Post language that unequivocally endorsed a comprehensive solution to the Israeli-Palestinian conflict resulting in “two states living side-by-side in peace and security.”Their rhetoric changed fast. At a press conference with Prime Minister Benjamin Netanyahu on Wednesday, US President Donald Trump confounded hard-liners in both camps – Israeli and Palestinian – by suggesting support for either a one-state or two-state “solution” to the decades-old conflict: “I like the one that both parties like,” the president said. “If Israel and the Palestinians are happy, I’m happy with the one they like the best.”Trump, in other words, does not believe in a “one-state solution.” He favors a solution that “both parties like.”
Trump on the two state solution for Israel and Palestinians during meet with Trump , Feb. 15, 2017 (credit: REUTERS)
Israeli media jumped on the suggestion that he might support a single state. But was Trump offering a coherent policy statement? Does a solution to the Israeli-Palestinian conflict exist within a unitary state framework that pleases both sides?The core movement in Israel against a two-state solution would like to see full or partial annexation of the West Bank and the creation of a “state-minus” for Palestine, or separately classified Israeli resident status for its people. In such a unitary state, the Palestinian population – which stands at roughly 4.17 million in total – would together with roughly 2 million Israeli Arabs nearly match Israel’s Jewish population.Such an outcome would not end the conflict, but rather exacerbate it, according to leadership across the Arab world – the very leaders who Trump claims will join his ambitious peace initiative in the coming weeks. Palestinians would demand equal rights and full Israeli citizenship, or else characterize the state as an apartheid body.“If Israel goes down the one-state path, it will never have true peace with the rest of the Arab world, and I can say that with certainty,” former US secretary of state John Kerry argued in his concluding speech on the conflict in December. “The Arab countries have made clear that they will not make peace with Israel without resolving the Israeli-Palestinian conflict. That’s not where their loyalties lie. That’s not where their politics are.”At least one prominent Israeli leader, President Reuven Rivlin, supports a unitary Israeli state from the river to the sea that provides Palestinians with equal rights. But he stands without many supporters. Settlers and their advocates who support one state acknowledge that granting all Palestinians full Israeli citizenship would force upon the state an existential crisis, risking the guarantee of the state’s Jewish majority.That’s why American presidents from both parties have long supported the two-state solution as the only option available in pursuit of mutual peace: They believed Israel cannot remain both Jewish and democratic – the historic Israel that has long garnered bipartisan US support – while maintaining control over Palestinians seeking independence. And they believe it is the only way to secure a broader Israeli-Arab peace.It is not clear from Trump’s comments this week whether his private position on two states has changed, or whether he simply shifted his public posture for political purposes – a strategic but substantively meaningless pivot meant to accommodate Israeli and American right-wing forces bearing down on him and Netanyahu. That might be a sensible short-term tactical approach, but it is unsustainable should negotiations proceed in earnest.Already, just one day after Netanyahu’s visit, Trump administration officials are being forced to reconcile Trump’s suggested openness to a unitary state with his expressed commitment to a comprehensive and mutual peace agreement.“I don’t think anyone would ever support [an outcome] where different classes of citizens would have different rights,” David Friedman, Trump’s ambassador-designate to Israel, said in his Senate confirmation hearing on Thursday.​“I don’t know Israelis on the Right – even on the far Right – who would support that​,” Friedman added, ​characterizing the two-state solution as the “best possibility” for peace.Several Israeli politicians projected their hopes on Trump’s reference to one state – but there was less focus on his public call on Netanyahu to “hold off” on settlement activity, to prepare for serious “compromise” in upcoming negotiations and to demonstrate “flexibility” with the Palestinians. What was Trump referring to, specifically? On what sticking points might flexibility be required of the Israelis? And why would the president seek a halt in settlement activity if he is not ultimately opposed to the eventual annexation of the West Bank?When former US president Barack Obama asked Netanyahu for a settlement freeze in their first meeting in 2009, Israelis dubbed the moment an “ambush.” That ask was made in private. Trump appears ready to make significant asks of Netanyahu – and they will be public, bold and reflective of Trump’s ambitious goal to seal the deal of all deals.