Underground barrier with Gaza to extend into the sea

The 3-billion NIS structure is scheduled to be completed within two years. 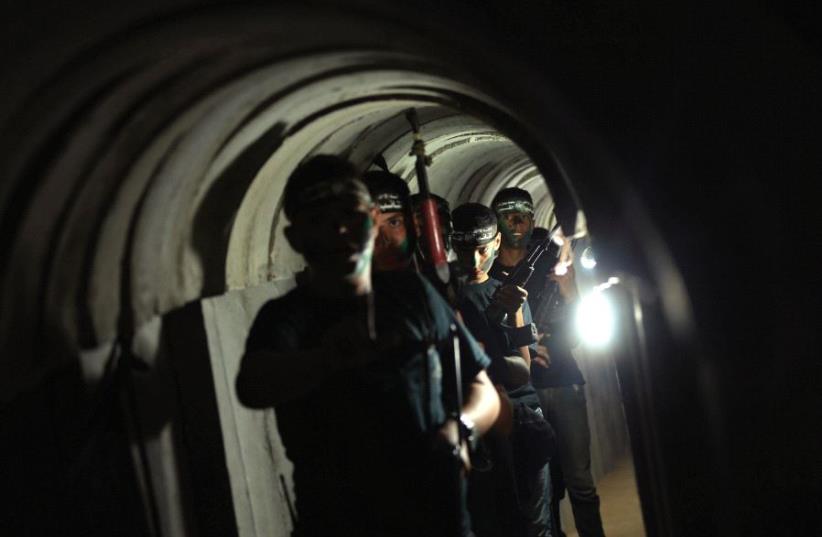 Young Palestinians advance through a tunnel during a military exercise organized by Hamas, east of Gaza City, last year
(photo credit: REUTERS)
Advertisement
The underground barrier designed to prevent tunnels from crossing into Israel from Gaza will stretch into the Mediterranean to stave off Hamas infiltration by sea.During Operation Protective Edge in 2014, five Hamas frogmen (naval commandos) tried to infiltrate Kibbutz Zikim before they were engaged and killed by the IDF. Hamas has significantly expanded their naval commando unit in the three years since the last conflict, with a reported 1,500 frogmen.The border with Gaza is Israel’s most explosive, with a rocket fired from the northern Gaza Strip striking near Ashkelon on Tuesday evening. While Hamas quickly arrested those responsible for firing the rocket, the construction of Israel’s underground barrier, which has become symbolic to both sides, may push Hamas to attack Israel.The head of the Southern Command Maj.-Gen. Eyal Zamir stated on Wednesday that “this wall can potentially lead to a dangerous escalation” despite the fact that the barrier is being built entirely in Israeli territory.Following Operation Protective Edge, Israel understood that it needed to come up with a solution and “this is the solution,” Zamir stated.Israel’s underground barrier, which has a system of advanced sensor and monitoring devices to detect tunnels, is made from European bentonite and is combined with a 6 m. high above-ground fence similar to the one which runs along the Israeli-Egyptian border.Construction of the barrier is expected to cost over NIS 3 billion and be completed within two years. It began near Sderot last year and is led by Brig.- Gen. Eran Ophir, head of the army’s fence-building administration.The IDF is confident that no tunnel will be able to cross the underground barrier, which it says will change the reality on the ground for both Israel and Hamas.During the 2014 war, several soldiers were killed by Hamas gunmen when they popped out of the numerous tunnels dug into Israel by the terror group, surprising the IDF and leaving the residents of border communities concerned about possible tunnels beneath their homes.By the time of the last cease-fire, the IDF said it had destroyed 32 tunnels that crossed under the border.Hamas continues to invest significant amounts of manpower and money into their tunnel system. Zamir described it as a “metro system” of three different kinds of tunnels including smuggling tunnels with Egypt, tunnels inside the Strip used for command centers and weapons storage and offensive tunnels used for cross-border attacks into Israel.According to Zamir, many of the tunnels run under civilian homes in the Gaza Strip. On Wednesday, he presented two residential buildings used by Hamas, including one which belongs to a family with six children and another six-story building built within the past two years.“Any civilians who stay in these buildings endanger their lives and the lives of their families. It’s Hamas who endangers them first and foremost, but every building over a tunnel is a legitimate military target,” Zamir said. “Part of Hamas’s combat strategy is to conduct itself within civilian areas, which is intended to make it difficult for the IDF to locate, attack and destroy the group’s military infrastructure,” Zamir stated, adding that by drawing Israeli fire to these buildings, Hamas aims to delegitimize Israel and the IDF.But with Hamas bragging of continued work on its tunnel system and Israeli civilians living in border communities reporting hearing sounds of digging, work on the barrier is kicking into high gear.There are currently 10 areas along the border where hundreds of foreign workers, as well as German-made diggers and other heavy machinery, are working. By November, that number is expected to jump to 40 different locations.