A Polish archaeologist has found answers to a 100-year-old mystery after identifying over 200 inscriptions addressed to an anonymous god.

Aleksandra Kubiak-Schneider, a Polish archaeologist, has been carrying out research in an ancient metropolis in today’s Syria, she found about 200 texts dated mainly to the 2nd and 3rd century CE. All of them contained mysterious phrases in the form of addressing a deity.

"He whose name is blessed forever." "Lord of the Universe." "Merciful."

For about 100 years scientists have been trying to determine which deity was the addressee of these specific phrases. While looking for answers, the unknown deity was named: the Anonymous God of Palmyra.

“These inscriptions were on stone altars intended for burning the fragrant sacrifice of incense, juniper grains and other aromas and for pouring liquids,” Kubiak-Schneider told Science in Poland.

“This was interpreted as monotheistic manifestations and tendencies to worship the only God, a mystical dimension of the cult of the Lord of Heaven, Baalshamin, as well as a taboo against speaking the name of the deity similar to that existing in Judaism, because these phrases have been evoking and still evoke biblical connotations,” Kubiak-Schneider said. 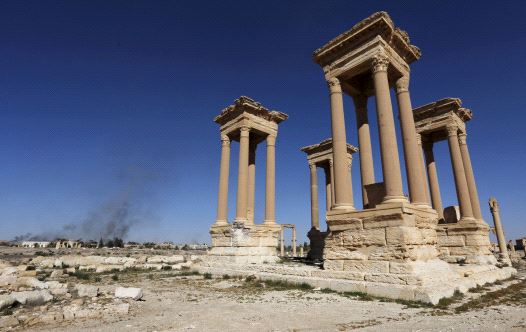 The researcher noticed that the specific way of addressing the deity was similar to the hymns sung and recited in the 1st millennium BCE temples of ancient Mesopotamia, when giving thanks for the received help to many important deities: Marduk-Bel, Nabu, Nergal, Hadad and others.

The non-use of the name of the god in case of dedication was, therefore, a sign of respect. The Palmyreans were perfectly aware of the names of their deities, the archaeologist argues, they simply elected not to use them.

“It is therefore not surprising that the deity's image is not found on the altars, which in this case is not connected with the prohibition on presenting the divine face. There was no one Anonymous God, every god who listened and showed favor to requests deserved eternal praise,” Kubiak-Schneider said.

In addition, the research shows that deities had many names and titles used depending on the situation and the person addressing them.

“Each name carries a different message, showing different aspects of deities worshipped in polytheistic systems, such as the one in Palmyra or the cities of Mesopotamia, or the Roman Empire,” Kubiak-Schneider explained.

Each name carries a different message, showing different aspects of deities worshipped in polytheistic systems, such as the one in Palmyra or the cities of Mesopotamia, or the Roman Empire.”

Palmyra was an ancient metropolis that mediated trade between the Roman Empire and the Far East - Persia, China and India. Initially, it was a modest caravan city, to eventually become one of the largest metropolises in the Mediterranean region in the 1st-2nd century.

It became famous primarily for its picturesque, monumental stone architecture - long colonnades and numerous temples devoted to various gods. Palmyra was declared a World Heritage Site by UNESCO in 1980. From 1959 to the beginning of the civil war in 2011 this ancient city was studied by a Polish archaeological mission.