The jewelry includes parts of necklaces with beads, spacers, and silver rings from the Umm-al Nar culture’s zenith. 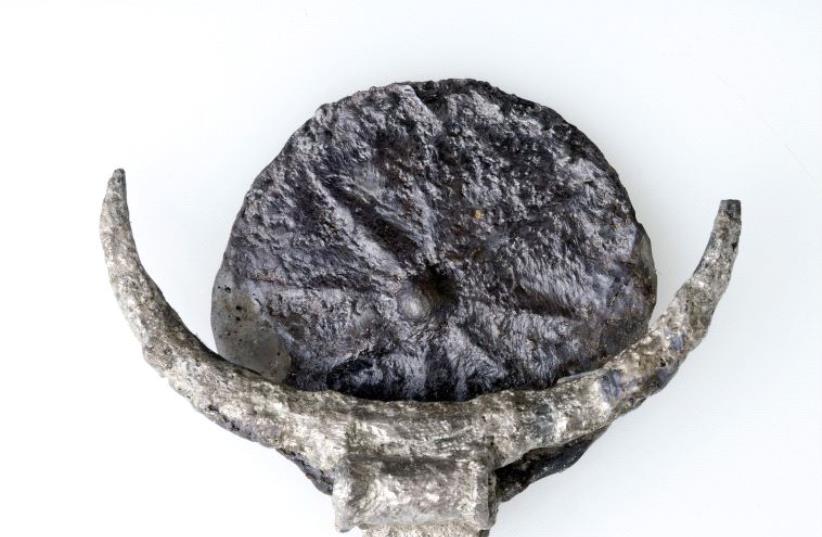 Medallion consisting of a Silver disc with an engraving of a Eight pointed star
(photo credit: CLARA AMIT/IAA)
Advertisement

Archaeological discoveries in the Oman region that shed light on ancient trade settlements have been unearthed after nearly a decade of excavations at an Oman site from the early Bronze Age.

On the sidelines of the International Conference on Archaeology and Arts in South Asia, in Barcelona, Spain, the joint American and Omani mission was recently announced.

The team was headed by Prof. Dr. Nasser Al-Jahuri and Dr. Khaled Douglas from the Department of Archaeology at Sultan Qaboos University, according to a press release by Oman’s Ministry of Heritage and Tourism.

The team was assisted by Prof. Kimberly Williams from Temple University Philadelphia, USA, who excavated the tomb in question.

During the excavations, archeologists found remains of administrative buildings, ritual buildings, a tomb,  warehouses, industrial infrastructure for processing copper ore, and silver jewelry dating back to the 3rd millennium BC.

The site, titled Dahwa 7, also included a mass grave ,which was the only grave found at the site. It yielded a large number of local and imported pottery items, as well as other findings.

The jewelry includes parts of necklaces with beads, spacers, and silver rings from the Umm-al Nar culture’s zenith, including one particular silver ring that highlighted the complexities of global trade during ancient times. It had a distinctive seal on a ring belonging to the Harappan civilization.

The seal depicted a bison from the Indus Valley, which lay a few hundred kilometers away in what constitutes modern-day India and Pakistan, Canada Today reported.

Similar rings have been dated to later periods according to Jonathan Mark Kenoyer, professor of anthropology and archaeology from the University of Wisconsin-Madison, USA.

“The archaeological site of Dahwa is considered among the important early Bronze Age sites in the Al-Batinah Plain due to the nature and quantity of archaeological finds that were uncovered during the various seasons of survey and excavation, which started in 2013 and continued until 2021," Prof. Nasser al-Jahuri, who discovered the site, said.

“The archaeological site of Dahwa is considered among the important early Bronze Age sites in the Al-Batinah Plain due to the nature and quantity of archaeological finds that were uncovered during the various seasons of survey and excavation, which started in 2013 and continued until 2021."

"In 2013, the department began its field work by conducting a comprehensive archaeological survey in the Dahwa region, where five distinct archaeological sites were discovered that include ancient settlements dating back to the so-called Umm al-Nar culture (2600-2000 BC)."

According to Dr. Dennis Frienz, an Italian expert on ancient trade routes between the Indus Valley and Oman, and a collaborator with the Omani Ministry of Heritage and Tourism, “the discovery of a silver ring in a tomb in North Al Batinah is likely to have been made in Mesopotamia (Iraq) using Anatolian silver (Turkey) for an individual associated with foreign trade with the Indus civilization (Pakistan and Western India) shows the great development of foreign trade, interaction and trade and cultural relations in prehistoric Eurasia, which can certainly be considered a prototype of modern global exchanges.​”