All the world was a stage

70-odd paintings of set and costume designs by Boris Aronson provide some valuable insight into the lost world of New York Yiddish theater.

By CARL HOFFMAN
MAY 28, 2010 22:08
Boris Aronson stage design 311
(photo credit: Courtesy)
Advertisement
A Tel Aviv art gallery is undertaking the task of rediscovering and displaying a long-forgotten and virtually hidden body of work by a well-known American Jewish artist. Out of sight and out of mind, these fascinating sketches, drawings and paintings have not seen the light of day for more than 70 years.For more than 50 years, American theater was illuminated by the visual genius of Boris Aronson. Born in 1898 in Kiev, the son of a prominent rabbi, Aronson left his large traditional family and, after brief periods in Moscow and Berlin, arrived in the US in 1923, settling into the vast, vibrant world of the Lower East Side of New York. That much about his life has always been known.It has also been known that soon after arriving in New York, Aronson quickly established himself as a well-known costume and set designer for the thriving Yiddish theater, then at its peak of popularity and creativity. He particularly enjoyed working with the more experimental Yiddish theaters, including the Unser Theater, the Schildkraut Theater, and the yet more avant-garde Yiddish Art Theater. After a few years of designing sets and costumes for Yiddish plays, however, Aronson became concerned about his becoming “ghettoized” as an artist and moved uptown to Broadway in 1931.It was on Broadway where Aronson was to truly make his mark, eventually winning the Tony Award for scenic design no fewer than six times in his career. He began working with the Group Theater, formed by Harold Clurman, Cheryl Crawford and Lee Strasberg in 1931, designing sets for plays by Clifford Odets and Irwin Shaw, among others. Aronson subsequently went on to design costumes, scenery and even lighting effects for some of the most famous dramatic plays ever staged, including The Time of Your Life, Cabin in the Sky, The Country Girl, The Rose Tattoo, The Crucible, The View from the Bridge, Bus Stop, and The Diary of Ann Frank. 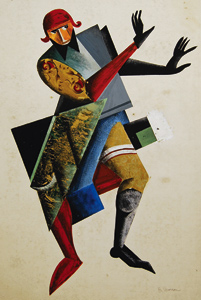 Although Aronson also designed the sets for Kurt Weill and Alan Jay Lerner’s Love Life, his major foray into Broadway musicals began in 1964 with the now-iconic Fiddler on the Roof, for which he was able to tap his roots in Yiddish theater. Soon to follow were Do Re Mi, Cabaret, Zorba, Company, Follies, A Little Night Music, and Pacific Overtures. Aronson also designed sets and costumes for the Metropolitan Opera and various New York ballet companies. His last work, in 1977, was for a television production of The Nutcracker, choreographed by Mikhail Baryshnikov. Aronson died in 1980.The driving force behind the current exhibition, “Boris Aronson: Avant-Garde Yiddish Theater, New York 1923–1931,” is Yaron Lavitz, who, with Benoit Sapiro, is co-owner of the Minotaure Galleries of Tel Aviv and Paris. Lavitz, 47, came to an awareness of Aronson’s work in the Yiddish theater in a somewhat roundabout way.He says: “I deal mostly with East European art, modern, from the “tens” to the 50s. Avant-garde; mostly Jewish avant-garde. This art, from Russia, Poland, Ukraine, Hungary and so on tells the story of Jews in the early 20th century looking for new ideas while adapting Jewish traditions from the synagogue, from holy books, from customs and beliefs. They put these traditions together with the modern, the avant-garde – especially the Russian avant-garde.” This period, Lavitz explains, came right after the Russian Revolution in 1917 and marked a brief but brilliant period of Jewish renaissance, created largely by an organization called the Kulture-Lige. Formed in Kiev at the beginning of 1918, the group’s self-declared mission was the advancement and promotion of Yiddish culture. By the end of that year, several “sections” of the Kulture-Lige were already up and running, including education, publishing, literature and the arts. Among the members of the arts section, which functioned actively for about six years, was a very young Boris Aronson.Lavitz explains: “Three years ago, we made an exhibition in the National Gallery of Ukraine in Kiev. It was about the Kulture-Lige. It was a project we made in Kiev, where they have decided, after 70 years, to adopt Jewish culture and make it something that belongs to them. Part of Ukrainian culture. “They’re now saying, ‘It’s our culture, it belongs to us.’ “First they kill us, and then they say that our culture belongs to them. Anyway, we made an exhibition of art from the Kulture-Lige. It was very successful. All of the media were there – TV, newspapers, everything.At this point, the art historian Hillel Kazovsky, who has written a book on the artists of the Kulture-Lige, began to push me. He told me, ‘Look, you’ve got to find the estate of Boris Aronson. He was a part of this group before he left for the United States in the 1920s. “’He moved first from Kiev to Moscow, was part of the theater in Moscow, and then he moved on to Berlin. After half a year there, he moved to New York in 1923 and became involved there with the Yiddish theater. Not many people know about his early work today, so you’ve got to collect all the pieces and really put him back on the map.’“So, I told him, ‘Let’s do some research, and see what we come up with.’ “At first, we didn’t know where to start. We even got a detective to help us, but he didn’t find anything. So in the end, we turned to Ruth Apteker Gabriel, who had staged a Kulture-Lige exhibition at the Israel Museum in 1987. It turned out that the family of Boris Aronson had donated some works to the museum. So she made the connection for me with the family. That was the beginning of this exhibit.” The final result is worth the hard work. Aronson was, in addition to being a multi-award-winning set and costume designer, also an accomplished painter. The 70-odd paintings of set and costume designs that make up the exhibition display an extraordinary range of styles and moods, while providing some valuable insight into the lost world of New York Yiddish theater.“We decided to exhibit only those works from the time he was involvedin the Yiddish theater,” Lavitz says. “After that, he moved up toBroadway, became an American, and forgot that he was Jewish. “He actually became embarrassed about showing these earlier works fromhis Yiddish theater days, so he put them away, and no one has seen themfor the past 70 years. “When we saw it for the first time, we felt like we had discovered aburied treasure.” According to Lavitz, this exhibition will appear inSeptember in Paris at the Grand Palais, after that at the PushkinMuseum in Moscow, and then at the Jewish Museum in New York.“Boris Aronson: Avant-Garde Yiddish Theater, New York1923–1931” is showing until June 30 at the Minotaure Gallery, 100 BenYehuda Street, Tel Aviv. Tel. 03-522-8424.
Sunday–Thursday 10:30–19:30, Friday 10:30–14:00.