For over 30 years, the annual springtime Jacob’s Ladder Festival has been a fixture of Anglo entertainment. 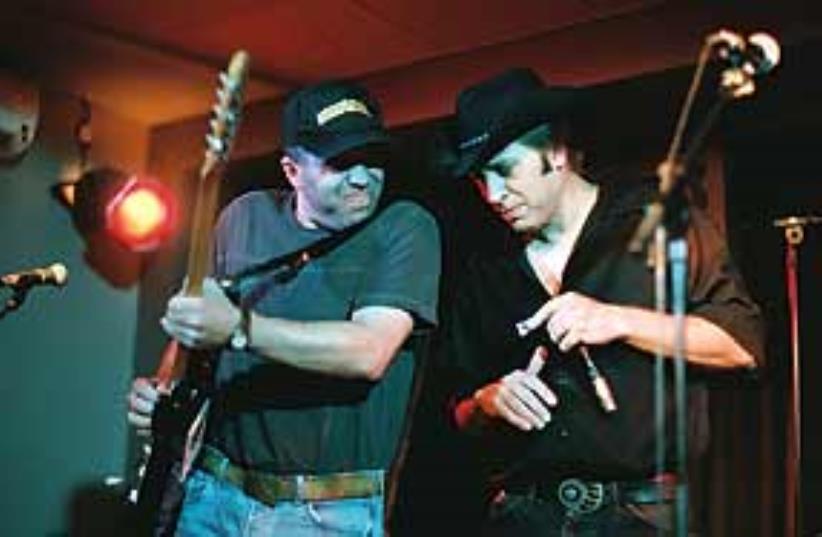 cg and the hammer311
(photo credit: Courtesy)
Advertisement
After over three decades in the business, and with a sustained success continuum to show for their elbow grease, one could have forgiven Jacob’s Ladder Festival organizers Yehudit and Menahem Vinegrad for sitting back on their hard earned laurels. However, while this year’s main spring edition of the festival (May 6-8) includes plenty of familiar faces there is clearly some innovative endeavor in there too.The Henri’s Notions sextet, which hails from the Deep South of the USA, fits snugly into the festival niche. The band has been fusing Celtic sounds with traditional American music – with a strong bedrock of the blues – for over twenty years. A popular draw at festivals and clubs all over the States, Henri’s Notions’s extensive oeuvre has generated successful synergies with artists from a broad swathe of genres, including Bob Dylan and David Grisman, and top Celtic acts such as The Tannahill Weavers and top fiddler Paddy O’Brien.But, then we move into somewhat harder edged territory with the intriguingly named Rebbe Soul (aka Bruce Burger) from New York. Backed by four local players, the New Yorker should have the festival faithful rocking and swaying with his eclectic mix of hip-hop, rock, ethnic music and fusion that takes in a wide range of Hebrew and English texts.Elsewhere over the three-day bash by the Kinneret you’ll find Jacob’s Ladder staples such as veteran guitarist-banjoist-harmonica player folkie Shai Tochner who, once again, teams up with guitarist-vocalist Lilac Sheer, although there will be some extra firepower provided by Adam Mader on violin, mandolin and flute. Celtic band Evergreen also returns – with Gal Shahar on violin and Abe Doron on percussion – as does traditional country and folk quartet Canaan Country led by Tzora Folk Cub mainstays husband-and-wife team singer Judi and singer-guitarist-banjo and mandolin player Lynn Lewis. And CG & The Hammer will be on hand to titillate the blues palate.However, this year’s Jacob’s Ladder shebang won’t just be about grooving and singing along as the Kinneret laps ever so gently a skip and a jump away behind the main outdoor stage. Sean Altman’s Jewmongous indoor gig is tailored to induce belly laughs while ruffling as many feathers as possible en route. The 48 year old Bronx, New York-born singer songwriter tellingly says that he gets his ideas “from the Talmud, by way of Lenny Bruce and The Beatles,” adding that his musical inspirations span “Simon & Garfunkel, Sam Cooke, The Kinks, Cole Porter, Queen, The Beach Boys and of course, the Fab Four.”Altman appears to occupy the eye of a religious-cultural-social maelstrom. “Lyrically, I’m forever the hapless monkey in the middle of an angel-versus-devil tug of war: I either write preciously sensitive tales of lost love and revenge or despicably juvenile tales of lost foreskins,” he explains. “Sometimes I’m a 13-year-old, giddy over having just sprouted his first pubic hair, and sometimes I’m a 40-year-old, miserable over having sprouted his first gray pubic hair.”By now one is getting the loud and clear picture that the Altman show strays just about as far as possible from the well trodden family friendly Jacob’s Ladder folk, Celtic and ethnic music-based path. Mind you, the legendary Taverners band, which appeared at the festival as long ago as 1979, with an acclaimed reunion slot a couple of years ago, also included a liberal helping of bawdy lyrics in its folk-based material. Still, Altman’s New York streetwise ethos should push the politically incorrect envelope a notch or two further beyond the pale.

Altman cut his musical teeth as a founding member of the highly popularRockapella a cappella band before progressing to Jewmongous. He hasperformed all over the world, from Beijing to London and much betwixt,and has performed twice at the White House. While his lyrics maysometimes sound patently irreverent, Altman hastens to note that while,for him, nothing is taboo and he has no bad intent. “Even Hitler andthe Holocaust are staples of my repertoire. That’s not because they’refunny – quite the opposite – but because they and the anti-Semitismthey represent are an integral part – if not the defining aspect – ofrecent Jewish history.”Still, Altman says he does avoid certain potential minefields and, forinstance, will not poke fun at local sensibilities. “I know a littleabout religious-political issues in Israel, but not enough to speakintelligently about them, so I’ll shut the f**# up and stick to topicsI know.”For more information about the Jacob’s Ladder Festival, go to:www.jlfestival.com, write to contact@jlfestival.com, call 04-6850403(Sunday-Thursday 10 a.m. to 1 p.m.), or fax to: 04-6962231.